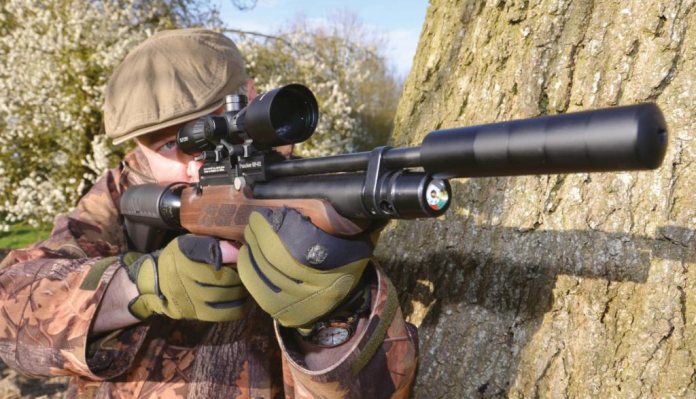 Pre-charged pneumatic airguns (PCPs) can often look rather alike, given that many follow the standard pattern of- barrel over cylinder, fig-8 clamp and conventional wooden stock. And yes; we’ve seen it repeated over and over and doubt. Well, under the spotlight here, are Turkish brand, Kral and, it’s fair to say they fell well and truly into that bracket, with their first foray into the world of PCPs a few years back. Their Puncher is an attractive rifle, I won’t deny, but, fairly unimaginative, and formulaic.

Well, that was then, and this is now, as Kral’s design team have since gone into overdrive, with a succession of radical, eye-catching models, such as the Jumbo, Big Max, and military-styled Armour derivatives, flying off the production line; screaming to be noticed! On test, here, is one of their very latest offerings; the Puncher NP02 and, whilst it part shares the name with the original PCP action on which it’s loosely based, a dramatic configuration sees that it has a completely different profile, feel and handling. I wonder if it will set a trend in the manufacturing community, as it is different and for that matter packed with loads of curb appeal?

First impressions are of a radical design, similar, at a quick glance, to the much respected Air Arms S510TDR (Take Down Rifle); due in no small part to the central scaled down, walnut, half stock with dropdown pistol grip. In truth, they are chalk and cheese, but it’s perhaps a rival in terms of slick visuals. Where the NP02 really scores though, is in its air storage, as it offers both a conventional front cylinder and a rear-mounted buddy bottle type and it’s then the penny drops. Overall capacity is a whopping 530cc, (charged from the same front inlet valve) and that’s always going to equate to a sizeable shot count, despite compact dimensions. Always a USP for some airgunners.

My test model came direct from official UK importers, Range Right Ltd, fitted it with an optional silencer for the test, a threaded protector comes as standard. Two magazines are supplied along with a single shot tray, a probe-style charging adaptor, 2-stage trigger, side-lever cocking, Picatinny-style rails, manometer (air capacity gauge), laser chequered Turkish walnut stock, synthetic rear stock assembly including adjustable butt pad, and finally a power adjuster. That’s some spec sheet for the money! So, time to give the NP02 a run out.

Build quality is typical Kral, as in super robust, rather than ultra-refined, but the overall impression is of a solidly made, good looking airgun, built to do a job. The walnut stock is particularly well executed, with attractive panels of stippling, and neat branding on the left side. That’s something most Turkish made guns have over their competition; excellent timber as standard and not at a premium. Bolting a scope in place is easy, since there are dovetail rails and Picatinny-style mounting options. I had the decision made for me, since the sample gun came fitted with the Konus T30 3-12X44 scope, also distributed by Range Right. A model I have to say that perfectly complements the compact nature of this rifle.

At 10.6”, the NP02’s barrel is pretty short, so I would definitely recommend the fitting of a silencer, via the ½” UNF, muzzle thread. The Swift Stumpy, again from Range Right (fitted here) is technically an optional extra at £48. This is an interesting design, since it is modular and unscrews at each sectional join, so allowing for cleaning or re-configuration to a shorter length! Very neat.

Charging the NP02 from empty, as per my sample, takes a few minutes, on a slow bleed bottle, given that we are filling, not only the front cylinder, but also that rear bottle. A push-in probe adaptor is used, and all worked fine. Twist and close the inlet valve on completion, and dirt ingress will be minimised.

And so, to the multi-shot aspect. Magazine capacity is 14-shots in the smaller .177 calibre, and 12 in .22, as per my test rifle. More importantly, the mag is a completely different design to the frankly overly complicated early version, produced for the original Puncher; phew, relief all round! They look and operate in much the same way as Theoben’s original design; a clockwise twist of the casing, all the way round, drop the first pellet in headfirst to hold back the spring, then fill each chamber in turn, until closed.

One unusual aspect of this model, is that the side-lever is fitted on the left of the action,and the magazine is fed in, wide end first, from the right. In practise, this didn’t seem to matter, as with most multi-shots, it’s a two-handed job to get everything loaded up initially. More effort is needed to pull it back than many rivals here, but the effort is still no big deal. Lever back, slide in the mag, close it to shut the action. Subsequent cycling indexes each shot in turn and, whilst I wasn’t keen on the way it touches the mag on closing, cycling was absolutely faultless, over my extended test period. A plastic single shot tray also comes supplied, as mentioned, and this is a simple friction fit, again inserted from the right.

Mulling over the left side positioned lever again, it occurred to me that, with such a short and compact design as the NP20, it could well appeal to left-handers too. In right-hand use, you can maintain the firing position easily and cycle with your left. Whereas, the southpaws have a conventional, forward supporting hand, which should please them more than struggling with a rightorientated layout.

Kral fit a 2-stage trigger to this model, although it’s fair to say that it is not the most sophisticated of units on the market. The blade could be broader, helping to spread the load across the pad of the finger, whilst adjustment cannot be carried out until the walnut stock has first been removed. Expect some creep, but overall it does the job. Also, on board a 2-position, lever safety catch, rear right of the action. It pushes forward to FIRE and reverses for SAFE, what more do you need?

In terms of overall handling, the NP02 is just a lot of fun to shoot, although, it would cost nothing and add nothing to the overall length, for the forend to be extended, by probably a couple of inches. My build is admittedly more ape-like, but at full stretch, I’m touching cold metal, if I’m not careful. Conversely, I reckon the length of the butt section could be a consideration for some, given that I’m conscious of being just the right side of full stretch, and I’m large framed! As usual though, try before you buy, and you shouldn’t be disappointed. As for the push-button adjustable butt pad, it’s a wonderfully neat design, and works well.

Don’t forget that this model comes fitted with a power adjuster, which is the silver knob on the right-hand side of the receiver. Look on the left side, and the small, linked, marker can be seen, indicating low or high power, or anything in between. I was curious to see the range of output possible, so initially, dialled the adjuster right round to its minimum setting and, from here, energy figures dropped to around 1ft/lb. Obviously, on lower power settings, shot count will be huge, as less air is being used, and it does bring an added versatility, for those times when full power simply isn’t required; and extended plinking sessions are!

Shot count with the NP02 is listed out as approximately 180 in .177 and 200-shots in .22, I assume at full power; so, I was keen to see how my specimen would perform. Over the chronograph, and from the prescribed 200bar pressure fill, I recorded a total of 144-shots before stopping at a residual pressure of 110bar. At this stage, the gun’s gauge was just inside the green section, almost into the yellow - signifying a recharge. I’m sure I could have carried on, but a reasonable band of consistency has to be the guide. Look to the first 84-shots and a total spread of 28 fps, and that’s far more like it, in terms of minimal variation.

In terms of performance, I did find the NP02 a bit pellet-fussy. Persevere, though, and some half decent groups should be on the cards. As mentioned, my test model was supplied in .22 calibre, and I stumbled across my best groups with some old Daystate FT pellets that I had kicking around. 5/8” over 30yds was encouraging and proof that experimenting with ammunition is always worth undertaking.

So, there we have it; the Kral NP02. A great looking, unusual PCP, that should prove a reliable workhorse. Time perhaps, to point out that, whilst my test gun, was specified as ‘Blued’, for the more lairy among us, who insist on making an even bigger statement, the Marine version comes with a silver finish- stainless ‘Cerakoted’ barrel and cylinder. Either option represents good value for money, for this style of airgun.