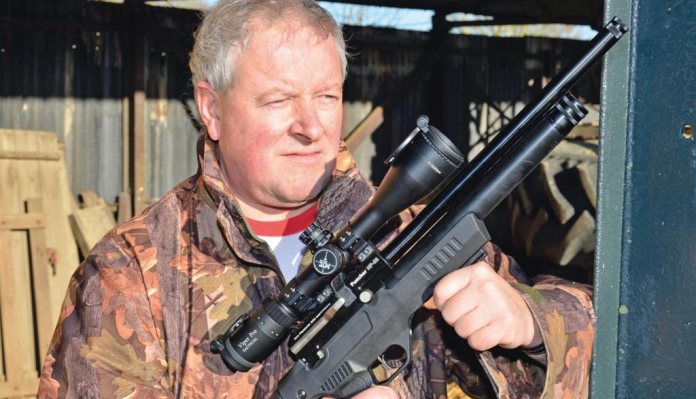 Trends come and go in any market and the recent clamour for militarystyle tactical airguns has really taken off. But whilst this fascination for macho profiling may not be everyone’s cup of tea, there’s no doubt that some serious reasoning is at play here. One thing’s for sure though, and even leaving aside the benefits, if a particular sector of the market is expanding, it’s a confident manufacturer indeed that spurns the chance to get involved.

On test here is Kral’s plucky little NP03, and this PCP model is a variation of their popular Puncher action, scaled-down, then given the tactical treatment.

At 6.4lbs unscoped, the Puncher NP03 is highly manageable, and that’s no surprise given its compact credentials. Take a close look and you’ll notice the rear modular stock assembly. It’s fully adjustable and is fitted to a now rather trendy, buffer tube arrangement.

The length of pull can be adjusted by gripping the large spring-loaded lever on the underside, then sliding the entire stock assembly back and forth to suit. With the stock pushed into the minimum setting, we’re talking just 31.5” total length. Grip and pull rearwards, and the length of pull can be increased by around 3.25”. The stock clicks into grooves along the buffer tube, so this is incremental, but have patience and with some trial and error, the trigger finger should fall naturally into place.

The adjustable cheekpiece is a definite two-handed job, given the resistance of the small adjuster button on the side. Simply hold the button down and slide the cheekpiece gently up or down until again, it clicks into the next groove. Spend some time to get this right and the end result will be a comfortable, more natural shooting position, with no straining for a sight picture. Granted, there is a small amount of movement as the comb can rock within its clip, but hey, I’m nitpicking, it’s still a brilliant feature.

Everything feels well made with the NP03 and whilst the synthetic stock components aren’t exactly soft touch, they have a textured feel that still appeals. There’s a useful hole through the butt, just forward of the pad, which could act as a sling mounting point among other things, whilst the rubber pad itself is satisfyingly soft and ridged for ultimate grip in the aim.

I love the drop-down pistol grip, which is all part of the main stock moulding, plus the ambidextrous contours just fell into place for my large hands. My only criticism is that the forend stops rather short, and given the minimal extra weight a few more inches of synthetic would have added and that it obviously wouldn’t affect the gun’s overall length, it’s an unnecessary irritation in my book. There’s a Picatinny rail mounted up front and this will be a handy feature for many, allowing for accessories to be bolted on in seconds. However, being positioned slap bang in the middle of the forend (a regular feature these days) can equally be another source of irritation. If it is, whip the stock off and the screws can be accessed.

The metalwork on show is all semimatte and finished to a reasonable standard, whilst the silver of the adjustable trigger blade and rod, contrast nicely. I like the bull barrel look from the full-length shroud, and the overall visuals get a big thumbs up.

OK, time to get a scope in place, and here, Kral keeps our options open with their neat dual rail system. Dovetail rails are on the inside, incorporating the cut-outs for Picatinny mounting that clamps on the outer edge. That’s clever, and a big help for those of us that may want to quickly transfer a sight from one gun to another, without switching mounts.

The NP03’s muzzle is screwcut 1/2” UNF and given that it’s flipping noisy as standard, and incredibly quiet with a silencer fitted, I would wholeheartedly recommend the latter. You’ll get added weight up front too, to a greater or lesser degree, which can help stability in the aim.

Look to the front of the cylinder and there’s a revolving dust cover. Twist to open, then insert the probe adaptor (supplied) from the air supply and gently charge to 200bar. Then, bleed the line and withdraw the probe.

Before going any further, we need to fill the magazine. Two mags come with the rifle - 14-shot in .177 as per my test gun and 12-shot in .22 calibre. To fill, twist the casing clockwise all the way around, drop the first pellet in head first, to hold back the spring, then fill each chamber in turn and close the lid.

Trigger pull can be adjusted, but this model requires the stock to be removed before any major tweaking can take place. There is, however, a neat match-style trigger blade, which can easily be adjusted via the small Allen key supplied. The blade is able to rotate around its axis to allow the finger to come in and make contact at an angle, plus it’s also adjustable for height. This can be done without stock removal!

Look to the right side of the NP03’s receiver and there are two controls left silver, to match the trigger. The rearmost is the manual safety catch, clearly marked up, each end of the scale. As for the circular knob at the front, this is a power adjuster, which is a feature that Kral often includes on their PCPs, and it works a treat. Turn it whilst looking at the scale on the left side of the receiver and the power can be not only wound right down but set to a precise point. It’s stating the obvious, but set to low power and the shot count will dramatically increase, which is a very handy feature to have. For example, informal fun shooting may have no requirement for power, and here, this Kral’s versatility can be a real trump card, allowing greater gaps between air fills.

Pulling back the side-lever will cock the hammer and set the trigger. This requires only modest effort. Snap the magazine into position from the right side of the action and close the lever to chamber the first shot. With that sizeable drop-down grip, shooting the NP03 from the prone position isn’t that easy, purely in terms of ground clearance, and I found standing a challenge, given the lack of front weight. As mentioned, opt to use a silencer and that muzzle can be finetuned in terms of weight to suit. You’ll be surprised at how performance can improve, just by altering the balance.

Drop to the kneeling position, and for me, this rifle is positively deadly. Tight clusters at 30 yards using Air Arms Diabolo Field pellets was an encouraging start, but I just knew this Kral needed more of a challenge. Moving back to 40 yards, and from a rested position, groups of just 3/8” were all the proof I needed. I suppose I shouldn’t have been too surprised, given the chronograph readouts. Six mags worth (84 shots) later, and a total velocity spread of just 25 FPS is very impressive indeed (shot down to a residual pressure of 100bar for the record).

In short, this is an impressive piece of kit with a host of useful features. Factor in some serious performance figures and it’s difficult not to conclude that it represents great value for the asking price.