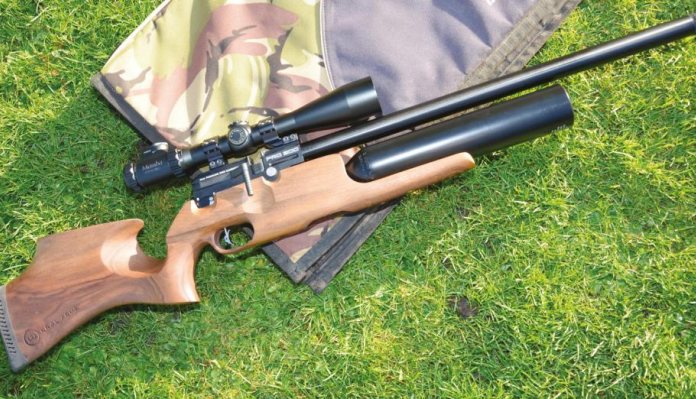 Having tested the original Puncher when it first hit the market back in 2016, I remember distinct mixed feelings at the time. Kral’s first foray into the world of PCPs was undeniably attractive, yet the use of probably the most unnecessarily complicated design of magazine, really did take away from their best intentions.

On test here is the very latest Kral Puncher Pro 500, and I’m pleased to say that all the nonsense has been dispensed with, as this Turkish manufacturer has seriously revamped the range. One quick check of their website and it’s obvious that they have adopted a new, greatly simplified and more conventional magazine system across the product range too; so, good news indeed.

I think the expression is ‘upping your game’, and Kral clearly mean business, with a plethora of new models, and bold designs, aimed at the ever demanding army of enthusiasts. Various derivatives now exist in the company’s product portfolio, and the Puncher Pro 500 takes the buddy bottle route, offering as it does a 500cc capacity front mounted air tank. Add side-lever cocking, semi-match trigger, manual safety catch, full length barrel shroud, Turkish Walnut sporter stock, probe charging, single or multi-shot, and even a power adjuster. It even comes supplied in its own padded hard case, so a real package deal, that looks good value on paper at least. Snap open the case handles and first impressions are of a purposeful sporting rifle of adult proportions, easy on the eye, and crammed with features.

I’ve always preferred the look of matt finished wood and the Turkish walnut sporter stock here really hits the spot. Plenty of attractive grain pattern on show and a mature configuration that offers real support and control where it’s needed. That pistol grip area is not only stylish, but also a little reminiscent of the sadly discontinued Daystate MKIV, in that there are twin thumb shelves to choose from, and a well-shaped grip. The high set, prominent cheek piece and extended forend all come together nicely and, with a recessed threaded mounting point on the underside of the forend, the option for adding accessories is also catered for, such as the small Picatinny rail, supplied in the box. OK; the rubber butt pad is a bit hard, but the integral trigger guard formed in wood, and laser-cut stippling and logo at the front, all contribute to the classy feel of this great looking airgun.

Matt woodwork not only looks tasteful, but it also offers practicality where a hunting scenario is concerned. On that score, the action compliments the woodwork perfectly, with a matt black receiver, and black anodised, full-length barrel shroud. Unscrewing the cap showed the barrel actually finishes two inches short, with that void utilised as a small expansion chamber complete with internal ports. I wouldn’t say the Pro 500 is quiet by any means, but the harsh crack synonymous with PCPs is definitely defused. Given the size of the shroud, however, it could be quieter; but there we are. You can however use the hidden thread at the muzzle and fit a silencer, but the ring from the hammer strike is still significant.

Looks are dominated by that sizeable buddy bottle up front and, at 500cc capacity, we are talking a serious shot count on offer. The Puncher Pro 500 comes supplied with a Foster-style bayonet adaptor, which threads onto a standard airline with a doughty seal in between. The downside is that on test, the adaptor’s spring loaded action was a bit over sprung and getting this snapped onto the valve on the underside of the action, proved fiddly. The wood around the recessed valve area is also a little rough on the hand and the small rubber cover is a bit crude, small details, but fair observations, nonetheless. With the prescribed 250 bar on board, it was time to fill the magazine.

Kral’s latest plastic, cassette-style magazine is similar to the original Theoben design, it has a clear front, which is marked to show the shot number as the chamber rotates. Capacity is 12 in .22” and 14 in .177”. Filling first requires the front plate to be twisted clockwise, all the way around, until a click is heard, and the first chamber then lines up. Whilst holding it in this ‘wound’ position against spring pressure, a pellet is dropped headfirst into the open chamber, which will stop the mechanism returning. Now, whilst initially keeping a finger over the back hole to stop the pellet from falling through, gently twist the lid anti clockwise, and drop a pellet into every chamber as they are exposed, until full. Sounds complicated but it isn’t.

Pull the side-lever to open the action and slide the magazine into its slot from the right hand side, close the lever, and the first shot is ready. On test it was particularly tight in its well and whilst this may well ease with wear, it was a little irritating, nonetheless. A raised tab on the mag looks like it is designed to add friction, and it certainly does its job! Nit picking aside, once the magazine is in place, subsequent cycling of the bolt and indexing shots, proved remarkably smooth and totally faultless for the duration of my test. It should also be noted that the design prevents the rifle from being shot empty, which is always a plus point. Unclip the lever, and its over-centre design means it is effectively spring assisted to the rear before cocking, which all adds to the smooth handling. The safety catch is manual, which for me is always preferable, and the manometer is perfectly placed on the underside of the action, by the valve, so residual pressure can be observed safely.

Kral include a neat power adjuster knob on this model, which sits on the right of the action, just forward of the side-lever. Rotating it down whilst looking at the small corresponding dial on the left side, reduces the power to around the 7 ft/lbs mark, which increases shot count exponentially. Moving it the other way brings it back up to full performance. Handy for back garden close range plinking, and informal practise sessions, where full power may not be needed, so versatility literally at the twist of a dial. Getting a scope bolted in place is simple too, given the deep rails cut into the top of the receiver. All ready to go then.

A 2-stage, semi-match trigger comes fitted as standard and some adjustment is possible for those brave enough to attempt it. The shoe looks the part for sure, and as the rifle came submitted for test, the pull was set reasonably light with a consistent breaking point, so I left well alone. Wrap the hand around that sumptuous pistol grip, let the thumb naturally find its support groove, relax the hand and let the finger smoothly take up the pressure; squeeze, and the shot’s on its way. Control and enhanced handling are becoming the name of the game these days, and Kral have gone to great lengths to deliver on both counts here.

Kral recommends a fill pressure of 250bar, which is quite high compared to some, but it does mean that, in conjunction with that massive buddy bottle, a decent run of shots is available. Over the chronograph, using the 15.9-grain RWS Superfield pellets, I only stopped recording shots after 284, which showed a slow climb and slow drop in velocity throughout. All this with a spread of 34 fps, isn’t bad going and, for those less bothered about tight consistency, I’m sure you could get many more from the charge, given that a residual pressure of 170 bar was still showing when I called it a day. However, charging to a slightly lower pressure would return a more consistent but smaller number for optimum performance. Results are impressive, whichever way you view them.

Accuracy-wise, I zeroed at 25 yards, and with Crosman Pointed ammo and the RWS Superfields tearing enlarged clusters, it was clear that it’s not pellet fussy. Moving back to 35 saw a best grouping of 3/8” using Air Arms Diabolo Fields, however, ¾” was more representative, with just about any ammo I tried. Overall then, highly creditable results, delivered in a civilised manner.

This Puncher Pro 500 has to be the most satisfying Kral I have shot to date, despite those small niggling irritations and their ever increasing and improving product line-up is a statement of intent, that they mean business. Yes, it is a highly competitive airgun market at the moment, and this model does undoubtedly have some seriously capable rivals to contend with. Yet in this price bracket, you do get an awful lot of airgun for the money. The only thing that I wonder about is the power adjuster; yes, it’s a good idea, as it does allow you to do something shot count plinking, if that’s your thing. However, how many people will actually want to use it like that? Also, and from an ethical viewpoint, taking it hunting and forgetting to turn it up to full power could be disastrous for your quarry.