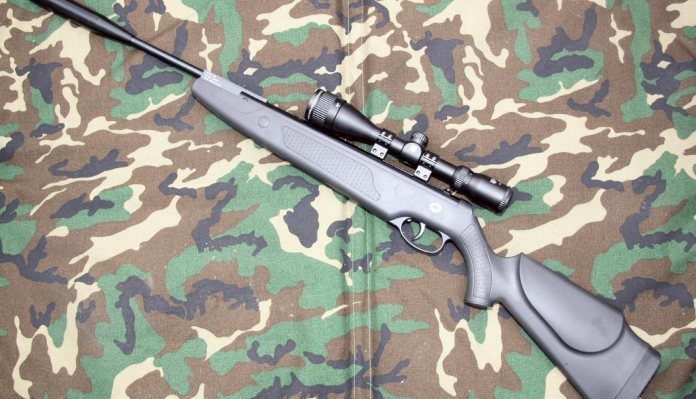 The Dragon Carbine is much slimmer than I remember and has a well-defined, medium height fully ambidextrous thickset cheekpiece and a noticeably unique looking black rubber butt pad. The ‘neck’ is surprisingly narrow and the width of the quite lengthy full face pistol grip equally so. However, it offers a very comfortable hold and has two generous panels containing raised dots and elongated raised ovals. These are also seen in the two equally generous panels positioned along the mid-section of the slab sided forend. The stock has an integral and very generously sized trigger guard which is more in-keeping with certain other synthetic (ABS) stock rifles. The forend is not quite as slim as the grip but is deep set, only beginning to slightly taper upwards as it progresses from the forward section of the trigger guard, it’s only after the plastic cover caps hiding the stock screws that it sweeps upwards to end in a small rounded tip.

The 12.75-inch long rifled steel barrel of the Dragon takes less effort to cock than you’d first suppose, thanks to the silencer adding front-end weight and of course acting as an ideal cocking aid.

In the cocked position you notice the rifle uses a large ball bearing for the detente lock. These are becoming less commonly used, being replaced by many manufacturers in favour of the wedge style lock. However, by the size, build and function of this unit, I’d say you’d not experience any trouble on this particular ruggedly built springer. A heavy-duty synthetic O-ringseal at the breech gives the rifle that all-important airtight lock when returned back to the original closed position.

Now to the dominating Hogan Firearms SG silencer that has the rifle push the tape to 43.6-inches in overall length, because it’s good to see this is a true silencer and not a muzzle weight as some presume. In respect of reducing muzzle report the silencer has been specifically created for this carbine and certainly it works.
The Dragon comes with a general purpose Nikko Stirling Mountmaster 3-9x40AO optic – a scope I’ve used in gun tests many times and, despite it being at the lower end of Nikko’s comprehensive range of optics, it’s reliable and practical, so in that respect they make a sensible pairing.

So with everything rigged, a pellet in the breech and the solid detente lock ‘clunking’ shut, I began setting zero. It has been a while since I last tried a Dragon but the trigger unit has certainly been upgraded and even cosmetically you can see Norica are now using the very same 2-stage trigger unit with in-trigger guard automatic safety button used on other Norica hunter models. Both trigger blade and safety catch are metal, the unique looking square shape buttonlike safety automatically clicks out from the top and in front of the trigger blade on cocking. A nice departure from the usual and it’s sensibly positioned to be easily disengaged with your forefinger when you are ready to take a shot.

As I was expecting, due to its size and build, the balance and handling of the combo are spot on. I set a 25 yard zero for the .22 calibre test rifle and soon achieved 3/8-inch c-c groups. For a springer in this price bracket, that’s not bad at all. To sum up I’d rate this as having all the bases covered and cosmetically it ticks all the right boxes in respect of how a UK shooter expects a silenced springer carbine to look and perform; I found it accurate, fast-handling and robust.

The ace up its sleeve is certainly the Hogan Firearms SG silencer. The majority of hunters these days not only want a can already on the rifle or the option to fit one. In this respect they’ve already got one of the better in-factory fitted units already onboard. Not only does it suppress muzzle report, but also internal spring noise on firing wasn’t an issue. It cocked smoothly and locked back for loading equally as solidly.

The Norica Dragon Carbine now really does have the look of a dedicated ‘hunter.’ It’s bundled accessories go some way to enforcing that view as the scope suits it perfectly and, quite frankly, in my opinion the chunky silencer is the icing on the cake. A few attractive aesthetic flourishes here and there, such as the company logo on the side of the stock just above the trigger guard, do catch the eye. With the acceptance of synthetic stocks now at an all time high, I reckon the Norica Dragon Carbine is now even more of a contender if you’re in the market for a springer of this type.