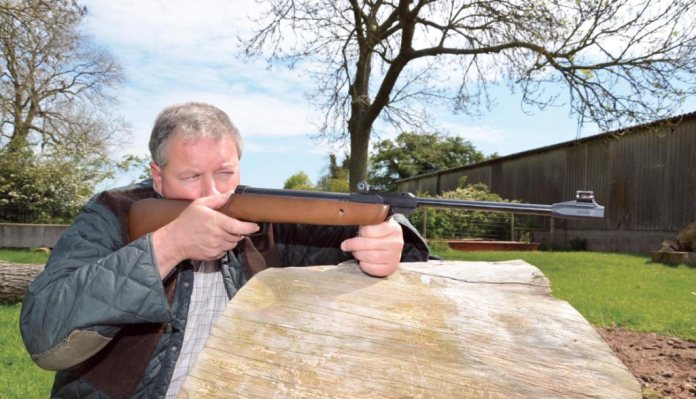 I began shooting at 13 years of age and was already physically developed enough to easily cope with the beefy old Webley Vulcan, which happened to be launched at just the right time. The Vulcan was, of course, an excellent first gun for me, fuelling a lifelong obsession; but with many youngsters these days, lucky enough to get the chance to shoot much earlier, there really is a need for specialist kit, aimed specifically at them.

On test here is the brand new Junior Hunter model from Spanish maker Gamo, and, I have to tell you, I’ve been rather impressed.

Okay, let’s get the only real gripe out the way right at the start. Putting ‘Hunter’ in the gun’s title is somewhat daft, even irresponsible, given that this is a super-low-powered air rifle, aimed solely at the little people among us. No one in their right mind would attempt to hunt with this model so it makes little sense badging it as such; there, that’s off my chest!

Now we can move on, and begin to appreciate just what a special little gun this is, for it really is a mini marvel in my book.

Consider for a moment the target audience (I would envisage 8-11 year olds), and the general awkwardness that surrounds finding suitable equipment that they can handle and operate, and you’ll get an idea of just where this gun is coming from. Small kids and youngsters, are still growing and their muscles developing, so any prospective rifle needs to be tailored to their dimensions, physique, and limited strength. The Gamo Junior Hunter, in short, hits this nail right on the head. Everything about it is effectively scaled down, and the result is a cracking little gun, which handles and shoots incidentally, like a dream! It all feels well-made for the money too, so there’s plenty to instil that all important ‘pride of ownership’ in many an eager novice shot.

In a sea of tactical plastic fantastic, traditionalists will appreciate the pleasantly shaped beech stock, and the thick walnut lacquer applied, as it’s both practical and attractive. The stock dimensions are dedicated to juniors, and that even means a super-small pistol grip, complete with attractive panels of checkering. A simple rubber buttpad would have been nice, but with an overall RRP sub- £100, including a soft gun case, pellets and metal spinner target, and target fun pack, it would be churlish to linger on the point. Length of pull is suitably short as a result in any case, and the couple of youngsters I had handle the Junior Hunter, felt perfectly comfortable.

At 36.5 inches in length, and just 4.4lbs in weight, this model is super-light and handy in the aim. Fibre optic open sights are fitted as standard too, including finger-friendly spring loaded adjustment wheels at the rear, so the fun can basically start from the off!

Cocking the action via that short 15 inch barrel is literally child’s play, and despite initial surprise at the use of a composite breech block, the super slick, silky action soon reveals just how easy and pleasant this gun is to prime.

The trigger blade is nicely shaped, and whilst another plastic component, it does its job well, admirably assisting in a fairly clean breaking mechanism. For those interested, and again for the record, the safety tab forward of the trigger, is manually operated. As for the firing cycle, its’ all rather civilised – perhaps to be expected given the low-power on offer, and with little kick or spring resonance going on, this is a highly enjoyable gun to shoot.

Where this type of dedicated junior model is concerned, power output is largely irrelevant. What matters to youngsters just starting out, is actually hitting the odd target, and in addition, being rewarded when their technique and skills inevitably improve along the way.

In this regard, Gamo’s Junior Hunter is a real corker. Velocity figures are largely academic then, but for the record, my test model posted an 8fps spread over 10 shots, with the Gamo Match pellets (supplied with the gun); which shows admirable consistency. Energy with this ammo equated to around 3.4ft/ lbs, but all importantly, accuracy was the real eye-opener. Given the Junior’s remit, I shot with open sights for the most part, managing groups of ½ inch at 10 yards and around ¾ inch at 20 yards. Potential accuracy needs to be explored of course, so fitting a scope at some point in the proceedings was always on the cards. Here, some care needs to be taken since the scaled down cylinder means there’s not much room to play with. Keeping any scope clear of the moving breech is the name of the game, and I was a little short on options, but an SMK super-compact pistol scope served my purposes for the duration. Half inch clusters over 30 yards (using the Gamo Match ammo) – yes, half inch – soon proved the point too!

Any youngster wanting to learn the ropes and simply enjoy the great pleasure that target shooting brings will be more than happy with this model. Gamo really have excelled themselves with the layout and overall execution of this pint-sized beauty, and with few other models that come to mind that go all out to cater for the really young shooter, the Junior Hunter deserves to succeed.

That ‘first airgun’ is vitally important to encourage new blood into our sport, and too few dedicated models such as this seem to appear. To say I was impressed is one massive understatement and Gamo deserve hearty congratulations for a seriously well thought out gun.

With no unnecessary power, cocking is smooth and easy, and that’s just what we need at club level to help kids who are keen yet not up to the rigours of full-sized kit. Great accuracy and a slick package deal, makes this surely one of the very best junior spec sporters on the market today.