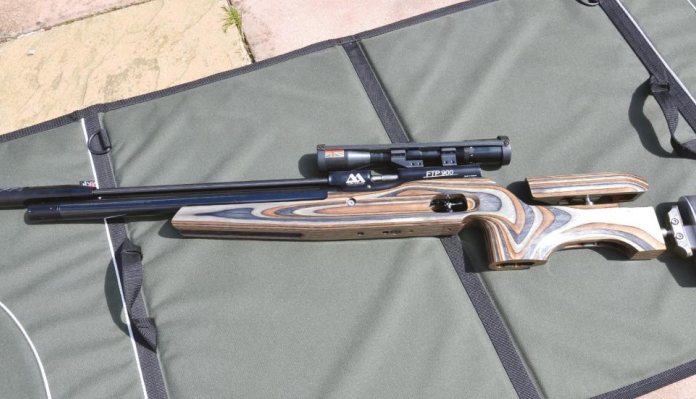 When Air Arms launched the FTP900, the airgun fraternity, myself included, was understandably excited. Air Arms have one of the best records in outdoor airgun competition, and their new flagship model really looked the part; with that snazzy shrouded barrel, and ‘no-compromise’ target stock - all aimed at the serious competition shooter. I was instantly onto the factory to reserve mine and couldn’t stop staring at it when it finally materialized.

Take a close look, and it soon becomes clear that this model is not only a thing of beauty, but a fantastic example of state-of-the-art airgun technology. Mine will produce a genuine one hole group at 35yds, and astonishing consistency over the chronograph. My only issue concerns the weight; and at 11lbs un-scoped, these are beefy airguns.

That said many Field Target shooters use incredibly heavy rifles, even filling parts of the stock with extra lead in some cases. Indeed there seems to be a trend for such monster rigs. It is of course a matter of personal taste, for what suits one person just may not suit another.

Initial marketing from Air Arms suggested the FTP900 was aimed at all outdoor competitors, but I have to say, in my opinion, FT is more its natural environment. With many shooters making modifications to their own rifles, Air Arms took it upon themselves to introduce their dedicated HFT500, aimed at the ‘Hunter Field Target’ discipline, and that model is proving incredibly popular. Despite this, the FTP has continued to show its class, taking first and third at this year’s World HFT Championships, then winning the first 2015 National UKAHFT round at Quarry, in Wales; so my reservations clearly aren’t everyone’s.

My main problem is I am fairly out of shape, and have grown accustomed to lighter kit of late. So what to do? I didn’t want to switch rifles, but something had to give. Losing a few pounds was the only viable alternative, I could probably do with that sort of thing too but my first option was putting the FTP on a diet; I can wait! I’d already dispensed with several components - barrel shrouds and clamp - to leave a fully floating tube; and of course the stock raiser (hamster) plate, which is quite weighty on its own. But the stock itself needed surgery if I was to get this model down to my target weight.

To be honest, I nearly embarked on some crude job with a hacksaw, but a conversation with my old friend Dave Welham at Airmasters, set my mind at rest. Common sense prevailed and an appointment was duly scheduled. Dave is of course, not only an authority on PCP technology and airguns in general, but a talented engineer. I soon realized I had created a monster as I’d triggered his methodical brain into overdrive; so Project FTP was up and running! But would I be ready for the outcome?

As standard, the FTP900 comes complete with an oversized pistol grip and palm shelf. It all feels great when set up; the stock was the work of three times World FT Champion, Nick Jenkinson after all! But for me, the depth of the shelf proved irritating when fitting the rifle into a compact hard case. I’d already decided to dispense with this feature and with that decision made, shortening the pistol grip was the logical next step. With the laminated woodwork all held in position for this operation, Dave’s next job was to mill out some of the inside of the grip itself.

With the stock still in position, the underside of the cheek piece adjuster housing could receive the same treatment, having layer upon layer shaved away, until a small void had been opened up. The art of the exercise was to remove significant areas of excess wood, without undermining the integrity and strength of the timber in any way. Of course, if this had been a springpowered rifle, far more care would have to be given, to preserve ultra strong joints, where the force of cocking a large mainspring would dictate the pace. No such worries here, and with common sense applied, and safety margins built in, my ideal airgun was slowly taking shape.

I’ve known Dave a long while now, and in mid flow, two things suddenly occurred to me. Firstly, it made a change not to be standing over him, whilst he fine tweaked or rebuilt a trigger mechanism of some sort our usual exploit over the years! Secondly, I sensed he had taken over - his quick brain thinking ahead, to the next subtle improvement. I’d mooted the idea of losing a half inch slice at the forend…..no sooner said than done!

In addition, the snugness of the cylinder in the stock, and my obsession for visible clearance tied in nicely with our remit to shave wood where possible. Slowly shaving down those raised side strips along the top of the forend, satisfied on both counts. Suddenly this area looked sleeker and more purposeful. It couldn’t have come out better!

Indeed, when Dave cried, “How about drilling out the centre of the ball joints”, I knew at once that ‘Project FTP’ was going into territory and directions way beyond where I had originally envisaged. Air Arms utilize ball joints in both the cheek piece and butt hook and an ounce or two could be lost by hollowing these out too. Dave was clearly enjoying himself, and he’s a good chap to have on your side! And so it went on. An ounce here, an ounce there. Drilling holes in the ball joint clamps; hollowing out part of the inside of the cheek-piece. Bit by tiny bit, the weight was falling, in my favour.

Now with the main stock trimmed where possible, the next step was to weather seal Dave’s alterations. Air Arms have the laminated stocks coated in a thick 2-pack gloss coat at the Minelli factory. We had Yacht Varnish, which given the small areas trimmed, was a perfectly acceptable match, and highly durable; being both impervious to the elements, and flexible when set.

With the initial trimming and weight saving exercise complete, the second stage of my master plan could be tabled. “Let’s talk butts Dave, if you pardon the expression”. I’ve never been a fan of butt hooks and whilst this curious trend obviously appeals to many (being almost a fashion accessory in FT these days), I can’t help getting excited about soft rubber. Oooh, er…missus. I’m obviously referring to a nice concave butt pad and I had just such an item ready and waiting.

Once I’d explained my idea, Dave set to work, first cutting out the basic shape of the backer plate, in aluminium sheet. After much sanding and polishing later, and with a couple of screws cut and finished to the perfect length, we had my perfect add-on. By neatly cutting down the joining block, the new rubber pad and backing plate could then be fixed in place. The beauty is that the butt pad assembly still has full adjustment in all directions, courtesy of the existing ball joint mechanism.

And so, as the dust and metal shavings finally settled after Mr Welham’s clever intervention, I’m pleased as punch. It simply feels right, and after the whole exercise, my FTP tips the scales a full 2lbs less than the factory specification. Allowing for the removed components, and the heavier rubber pad assembly added, Dave’s trimming exercise accounted for a further 7 ozs, which in the big scheme of things, is highly significant.

OK; I’m obviously a six foot weakling, but with my scaled down FTP, I now have what I consider to be one of the best airguns in the world, tailored to my exact needs. Thanks Dave…..you’re a genuine star. There’s just one problem; I’ve got no more excuses!