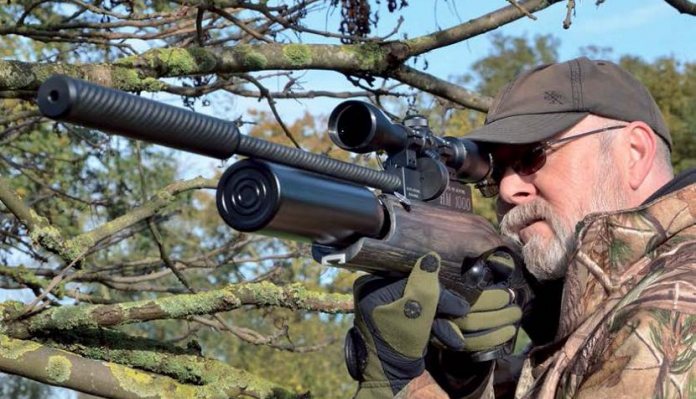 Hunting with an airgun requires skill and patience, but if we are to be fair to the quarry there should also be another pre-requisite, namely that a highly accurate rifle should be sourced for the job. All too often airguns are written off as general purpose and not fit for competition but okay for hunting duties. Of course, working to a useable distance where decent groups can still be achieved is a fair approach, but if distance over which live quarry is to be shot is to be extended (within reason), then a high level of performance is what we’re after, and we should surely always strive for maximum accuracy?

On test here is the very latest 2019 specification of the HM1000, which is a high-level dedicated hunting machine produced in the USA by Rapid Air Weapons, or RAW as they like to be known. RAW produce the TM1000 for FT and HFT competition work, but the HM is the ‘Hunting Model’, using much the same valving system in a format aimed at serious pest control.

Open the protective carton and it’s difficult not to be impressed. Handle the HM and it soon becomes apparent that we are dealing with a high-grade tool, built to do a job. The finish of the stock is exemplary, whilst the Thumb-hole Laminate configuration supplied for test just feels spot-on. A nicely defined high cheekpiece, drop down contoured and stippled grip, coupled with that adjustable rubber pad, means control and a comfortable head position are all catered for. Fancy adding either a bi-pod or lamp, and the neatly recessed accessory rail (optional at £74 extra) allows just that. However, think hard as, if the rail is opted for, its location smack in the middle of the forend can prove irritating. Personally, I think I would forgo the pleasure and mount any lamp on the scope.

Options abound, and the stocks can be ordered in either Sporter or Thumb-hole configuration, left- or righthand, whilst the actions can also be specified in left-hand spec. There are different colours of laminate available, and Walnut which comes in cheaper, incidentally. RAW even manufacture the stocks in-house, which is becoming a rarity these days, but it allows the company to keep full control of production processes.

Latest HM1000 specification now includes that rather snazzy full-length carbon fibre shroud and carbon fibre silencer. Access to the filler valve has also been greatly improved with this upgraded model, and where the old version required the use of a curious top hat arrangement to get into the heavily recessed inlet, no such fiddly nonsense exists here. Instead, the valve sits neatly on the right, just rear of the bottle. Just pull off the neat push-fit cap, snap on the Foster adaptor supplied, (fitted to the airline), and charge to the specified 200-bar or less (see performance figures below). Snap the valve cover back on and it’s job done!

All components on the HM1000 are reassuringly solid, well-machined and seemingly over-engineered, and there’s a classy air throughout which just instills confidence. Up front, that stylish silencer is multi baffled, and perfectly complements the carbon fibre shroud covering the barrel.

Fitting a scope is easy, and there’s a run of well-formed dovetail along the block just for the job. So, with glassware in place the final piece of prep work is to fill the magazine. One 12-shot cassette-style mag comes supplied with each HM1000, and it’s fair to say at this stage that the magazine design is extremely similar to that of Theoben. For that, read slick and reliable, with the filling procedure as follows: the clear lid first needs to be twisted anticlockwise against gentle spring pressure until the initial chamber is exposed. Now drop a pellet in headfirst, whilst ensuring it doesn’t drop all the way through. Gently rotate the lid clockwise, dropping a pellet into each chamber, until the whole cassette is full.

To load the magazine into the action, just pull back the side-lever until the trigger and hammer are heard to engage, then slide in the cassette into its slot in the breech block from the left side until it’s fully inserted. Now close the lever and the first shot is indexed and ready to go. These mags aren’t the most robust on the market, but in operation they are ultrarefined and work superbly.

Whilst the HM1000 is supplied with a magazine, it’s a key feature in my book that this highly capable rifle can also be shot single shot without the magazine in place.

With a fairly wide access point deliberately opened up around the breech, it’s easy to load too, with the added advantage here that the pellet is pressed directly into the lip of the rifling. Quite a snug fit on test, but this is an opportunity to detect and call an overly slack or overly tight pellet, which is a great feature when trying to maximise results. So many airguns now come with some form of chamfered breech that you don’t get to feel that connection as the lead mates with the rifling, and it’s satisfying when you can. Factor in the quality of the two-stage match trigger, and the specification on offer here starts to really score. I was salivating at the prospect, so time to hit the range.

Despite being technically regulated, the figures recorded with the HM1000 over a chronograph show a slow climb in velocity. As it stands the figures are still fair – 216 shots from a 200-bar fill pressure, shot down to 100-bar residual pressure. I stopped at this point as 100-bar must be nearing the reg pressure, although velocities for the record were still healthy. A total spread of 38fps was recorded over the whole charge, but this dropped to around 29fps, looking at shots from 180-bar onwards. So, my conclusion, given the large shot count, would be to charge to a lower fill pressure than specified, zero the gun at that pressure, and use the tighter band of consistent shots.

So, not amazing consistency, but still reasonable, especially if, as mentioned, you experiment a little more with fill pressure. This premium airgun, however, is about so much more than technical figures. Shoulder the HM1000 and you know you have a piece of topclass engineering in your hands. Cycling the 12-shot magazine throughout my test period proved a pleasant experience, and it worked faultlessly throughout. Whilst it’s impossible to fire the gun when the mag is empty, the HM can still be double-cocked (admittedly a daft thing to do, but loss of concentration is inevitable at some point). At this point, two pellets are loaded up the spout, but it’s a common fault and not a deal breaker.

As for how the mechanics go about their business to deliver the shot, that really impresses: minimal effort to work that beautifully weighted sidelever, the slick magazine, a mere squeeze of the trigger, and just a quick muted snap as the shot is released. Muzzle report is dramatically tamed, courtesy of that sizeable carbon fibre silencer, and the end-result as this all comes together is just one of the sweetest firing airguns around.

So, what about accuracy? After a brief familiarisation with stock fit and trigger pull, I soon had a rough zero achieved. Moving back to 35-yards, and a five shot group forming one genuine ragged hole and one of the best groups I had seen in a long while, hammered home the point, shot with either the mag or single loading. Sub-half-inch over 50-yards is also on the cards, so pretty superb overall.

Pedigree stands for so much, and these finely engineered rifles really are a joy to shoot. It’s all about refinement – a word that keeps cropping up where the HM1000 is concerned. Admittedly they don’t come cheap, and whilst there are a few rivals on the market that may replicate the down range performance, probably for considerably less ready cash, few can match the classy feel, top-notch engineering and refined shot release of this RAW HM special. Whilst there will always be enthusiasts who will see fit to sneer at the asking price of such an extravagance, a ready market of airgun aficionados now exists, eager to invest in upmarket fare. Build quality and engineering integrity are everything in this competitive sector, not to mention that all important element – pride of ownership. Rapid Air Weapons are one such manufacturer that fully understands their target audience.

So, if you fancy a highgrade hunting machine, beautifully put together, and built to do the job in style, then this model comes highly recommended, earning its place on any shortlist.