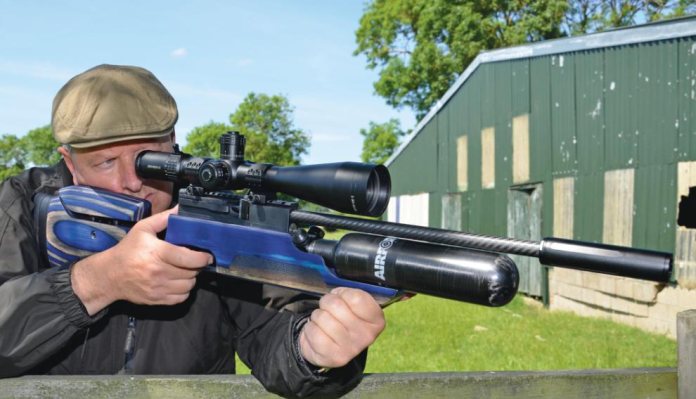 Today’s airgun market has shown that enthusiasts are prepared to pay for classy high-end kit that delivers. Take a good look at the rifle on show here and an array of subtle features stand out, but hold on just a minute, doesn’t it all look rather familiar?

Rapid Air Weapons (RAW) was set up in the USA by Martin Rutterford, a former director of the Theoben brand. In the UK, Theoben were still trading, but eventually hit problems, had to be bought out and became Impact Airguns, which is now sadly no more. However, RAW has flourished, carving out a niche sector of the market for its premium hardware.

I have a soft spot for the brand too since my current competition gun just happens to be an old Impact GSX600, which whilst having been customized by Airmasters, is built around much the same chunky action configuration. Same direct feed and same trigger blade.

What you see here is the very latest RAW HM1000X, specified in 12 ft/lbs. The eye-catching laminate stock can be ordered in red, black, blue, yellow, and light tan. Undeniably lairy, but for the army of enthusiasts who appreciate the technical stability that laminate represents, it’s clearly ‘the way to go!’

First impressions are always interesting and whilst the fit and finish on show here are near immaculate, reactions from my mini straw poll were fully mixed over the woodwork. Whilst it’s difficult to deny it does the job, the styling just seems a little vague, around the pistol grip for one and also the shape of the comb, with perhaps more definition needed. I’m talking aesthetics here, rather than any deficiency in handling, and where the grip is concerned, ‘ambi’ credentials, I appreciate, dictate play.

Crisp, pin perfect lasercut chequering always helps and the configuration overall, feels fully supportive. Look to the underside and there’s an accessory rail, and whilst I would prefer a more standard, ISU open rail, this ‘M-LOK’ design still offers plenty of anchor points.

The carbon fibre barrel shroud looks the part and mates well with the matte black coating applied to the robustlooking action. The Picatinny rail on top adds to the solid feel and with the threaded barrel capped off with a compact Tanto silencer (supplied as standard), the HM1000X is ready to roll from the off.

Before taking to the field, the RAW first needs an air intake, to fill its sizeable 480cc buddy bottle. In the interests of safety, it always pays to check the fill pressure with pneumatics and I’m assured by the factory Stateside, that this model is happy at 250bar. Given that you’ll get around 450 shots from a charge, it will probably pay to fill to a lower figure in practice, simply as less stress is placed on components over time. For my test period, I filled to the max.

The rifle comes with a 17- shot magazine in .177 calibre, which is hardly surprising, since it was Theoben who originally popularized magazinefed airguns, with their now legendary Rapid 7 model. The mag here is similar to the original design and it’s easy to fill.

Just before the action starts, with a scope bolted in place, it’s time to tweak those stock features. Both rely on a single Allen bolt, simply slacken it off and raise or lower either the cheek piece or butt pad. We are talking correct gun-fit here, so don’t rush the process. When eye/scope alignment is spot on, gently tighten the bolts and zeroing can begin.

So how does this HM1000X feel to shoot? Well, as I mentioned at the start, I use an Impact GSX600, with similar characteristics as this RAW, and one big disadvantage of that gun, as beautiful as it is, is the absurdly proud cocking bolt. Cycling the slick side-lever on the HM1000X is, to be honest, an exercise in subtle engineering and refinement, as pulling the lever back requires very little effort, given the short arc of movement.

One negative observation during the test concerned the magazine, which I have to say, wasn’t the smoothest I’ve ever used, in terms of occasional mild resistance when cycling the system, but this will depend on pellets used of course.

Take a close look at that breech though and you’ll notice the chunky action is relieved on both sides to accommodate single-shot loading which, incidentally, is a process I had Airmasters undertake on my Impact. Just trip the side-lever gently open and a pellet can be chambered directly into the barrel. You can feel an overly tight or slack pellet by doing this, which always helps maximise results down range. More subtlety comes with the articulated pellet probe and just watching it return to a close, is a satisfying business.

Trigger wise, this is the same profile components/trigger blade and safety tab, as my Impact. Whilst they may look fairly basic on a gun of this price, I can assure you that, as someone obsessed with match triggers, they deliver on all counts. I can see some individuals understandably bemoaning the lack of an adjustable blade, but the saving grace here is the pleasing blade shape, plus the set-back positioning. It suits me perfectly, but this is perhaps an area where try before you buy, is the best policy.

Trigger release is superbly light and predictable and I, believe me, am rather fussy in this area.

The massive carbon fibre buddy bottle, coupled with the prescribed high fill pressure, means you won’t be running out of firepower anytime soon. The action, as mentioned, is regulated, so I opted to test the top of the charge over the chronograph, to gauge consistency. A total spread of just 17 FPS (over 100 shots) using Webley Mosquito pellets, was a satisfying start to the proceedings. Next, it was time to check accuracy down range.

I’m always aware that this grade of rifle demands a more stringent test, so after first zeroing the optics, I settled for groupings at 45 yards. If you look at the clusters, in relation to the 1p coin in the photo, you’ll get some idea. Groups that measure sub 5p piece, get the thumbs up from me.

Now here’s a thing. If you like what you see with this RAW, but laminate isn’t your thing, if you fancy a more tactical look, then there is always the option of the HM1000X chassis. This comes with a synthetic stock, that sports a slim-line aluminium ventilated front chassis and rear bar, from which come synthetic sections. There’s an AR15-style drop-down grip, an adjustable cheek piece on a riser mechanism (complete with finger wheel control) and also an extendable rubber butt section; this time with push-button control.

As mentioned, this model is 12 ft/lbs here, but these premium machines can be specified in FAC, in .22, .25, .30 and possibly other calibres. FAC variants get polygon barrels too, a feature that takes into account users of the new and emerging slug ammunition. They also feature an adjustable regulator, which is an attribute that is proving increasingly popular of late, with high power airguns.

New UK distributors, Elite Optical, are keen to stress the family history with Theoben, and the plan apparently, is to bring in other models, such as the TM1000 Target rifle. The RAW brand remains very much handmade in small numbers, so there may be time lags here. Stocks are manufactured in the USA too, by a company called AB (American Built), and it’s the supply chain that Elite are keen to streamline.

One things for sure, Rapid Air Weapons are in a good place at the moment, with high demand, and appreciation for the pedigree products on offer. The HM1000X may represent a significant outlay but the build quality, feel and function, plus the end performance, are immensely satisfying.