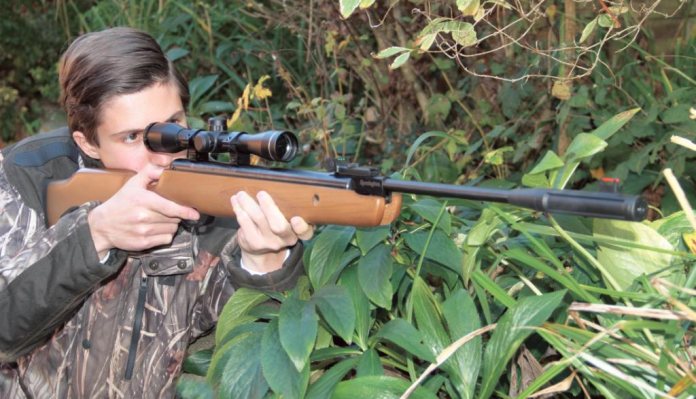 Despite the plethora of PCP air rifles on the market today, the good old spring piston powered guns still offer the young, new or experienced air gun user a cost-effective and accurate rifle.

SMK Ltd. offer a wide range of air rifles and guns to the marketplace, all of which are good value for money and practical for plinking, target shooting or vermin control. This test gun is aimed squarely at the vermin shooter and is designed specifically to appeal due to its full power performance and accuracy. SMK had a vision for what they wanted, and this ended up with Remington producing a version called the Pest Controller.

Sometimes, a wooden stock is better suited for an air rifle and that is particularly true when considering a springer. The extra weight a timber stock gives to the rifle helps dampen down recoil and spring noise and makes the whole firing cycle better and thus more accurate. It also has the benefit of looking better and feeling a lot friendlier i.e. warmer.

The Pest Controller has a typical sporter style with a long forend tip that reaches past the breech to hide the barrel action union, which I like. The forend is full-bodied and the pistol grip is average sized to accommodate a myriad of hand sizes. There is very little cast and, despite a Monte Carlo type cheekpiece and side rest, you can use this gun both left or right handed. It is made from good old American hardwood, i.e. beech and is left pretty much unstained, which is nice, as it makes the Pest Controller stand out with its blonde stock colour. This is sealed with a thin matt lacquer, so that you can still see and feel the wood grain and the chequering to both forend and pistol grip form two panels to both sides and are more decorative than for grip in truth. The recoil pad though is good, being solid black rubber and grips a treat. I like the overall look, very old-school but traditional and functional and handles very well and makes the rifle feel very sturdy overall.

Being a break barrel design Remington have gone the tried and tested detent locking system. It uses a cross bolt pivot pin, so that the barrel can open and close and is locked in place by a sprung ‘chisel’ type lug, held captive by this cross bolt; this in turn locks under a protruding spur from the action wall and so under the tension and bearing surface of the detent the barrel is held tight and parallel to the action.

It does not require a lot of effort to unlock the barrel but still it is best to tap the barrel with the open hand to break the friction between the detent and action. Then it’s a slow cocking action of the barrel until the trigger sear engages.

The barrel itself is nicely blued and is 16.75-inches long. This is measured from breech to end of muzzle shroud, which is a large polymer end to the muzzle. This is a combination of a sound moderator and fibre optic sight. It also acts as a good cocking aid too.

I’m not sure how good the sound moderation will be, as the muzzle of the barrel is only just short of the shroud. The sights though are a high raised polymer stalk with a long red fibre optic bead through it. It is bright and there is enough room for the hand to cock the rifle without touching the foresight. The rear sight is a fully adjustable wheel operated elevation and windage type and has a good degree of adjustment range and two green Day-Glo fibre optic elements to align with the foresight bead.

Where the barrel joins the action, the cross pin has a securing nut, so it won’t work lose or you can adjust any play after extended usage. The action, as with the barrel, has the same matt bluing, which complements the woodwork well. The action is Weihrauch HW95 sized, with twin 11mm wide dovetails, so there are plenty of options for scopes, red dot and NV kit.

The trigger is a standard twostage unit with a grooved striated trigger blade. It’s pretty basic but has a 4.55lb pull weight and small amount of creep, so not bad at all really. The safety is placed in front of the trigger blade and is pulled back for safe and pushed forward to fire. It’s manual, so can be set and reset when you like.

The Pest Controller came with SMK’s 4x32mm Mil Dot scope and mounts and some Remington Tyrant Shock pellets, but I also shot a wider variety of pellet types and weights over the chronograph to get a feel for what the Remington liked and disliked. As with all spring powered air rifles, there is a need for a ‘running in period’, as is also stated on the packaging. Those are wise words, as all spring guns need the internal seals and lubricant to bed in before the action becomes smooth and consistent. The manual states at least 100 pellets and that is easily achieved by the sighting process and general plinking before the test velocities and accuracy were recorded.

After 150 pellets, the typical spring noise and wheeze on cocking a spring gun disappeared and the Remington was running sweetly. Being a 22 cal only option, the slower velocity actually gave a low muzzle report, so all good.

As with most springers, it likes lighter to medium weight pellets and the best tested both for accuracy and power. Highest velocity went to the H&N FTT Green, with a velocity of 731fps, due to its light weight of 9.4-grains that produced 11.2ft/ lbs energy and nice five shot 0.85-inch groups at 25-yards.

Normal lead pellet wise and the four other pellets reached the 11ft/lbs plus energy level. Best where the FTT pellet, always good at 592fps for 11.36ft/lbs, highest recorded on test from the 14.6-grain pellet and very good 0.65-inch groups. The RWS Hobbies shot 0.75-inch groups with 649fps and 11.03ft/lbs from the lighter 11.8-grain pellet and their flat head profile are great squirrel medicine.

Remington air rifles are good value for money, spring powered guns and SMK Ltd. offer this Pest Controller version for those UK shooters that just want an affordable, honest air rifle. Well-made and, after the run-in period, accurate and offering good power levels. I shot a few squirrels and a crow, as well as just plinking away at knock down targets; so, this rifle did everything asked of it!