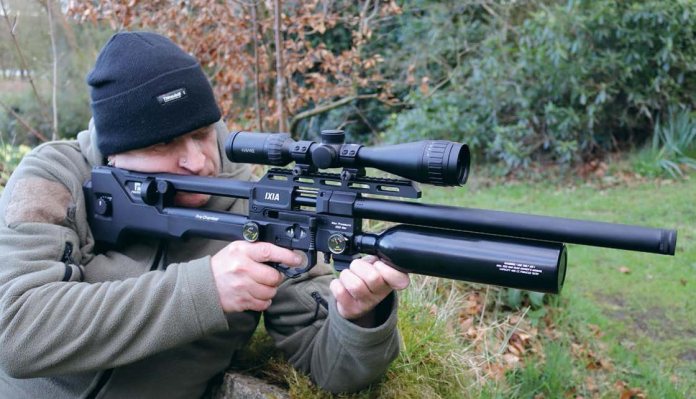 Although Reximex is a new name in airguns on these shores, due to a very pro-active advertising campaign by Range Right Ltd, they’re already gaining a lot of attention. However, it’s not just because of PR that the brand is growing, as the air rifles are gaining attention on their own merits.

The Reximex Ixia follows the most used design and style for a bullpup, so it has an unashamedly tactical appearance, it’s primarily a multi-shot PCP and it stores its compressed air in a large capacity buddy bottle.

The airgun has an ambidextrous polymer/metal stock and the former is primarily used at the butt section, with the metal buddy bottle basically serving as the forend.

The top of the butt section is actually partly covered in polymer because directly below is the barrel, whilst the lower separate hollow strut, which is described as a Pre- Chamber, acts like a Plenum chamber for the regulator. This also gives the rifle a part skeletonised appearance.

There is no cheekpiece to speak off, as the upper polymer-covered tube runs straight back from the action to stop short at the magazine housing, beyond which is a heightadjustable rubber shoulder pad that is heavily ridged. The pad is adjusted and positioned using a release catch found midway along its polymer section, which also locks it in place when you slide it to the desired height. This is a nifty feature as there is no need for an Allen key or screwdriver to be carried around should you want to adjust the butt pad in the field.

The AR15-style pistol grip shows forward ridging plus chequered panels, while the upper section also has recesses on both sides adjacent to the rear of the trigger guard. These give an unobstructed pathway for your finger to reach the trigger and allow your thumb to wrap comfortably around the other side. It gives you a very assured grip and a fine platform from which to operate the trigger.

The mid-section is metal and the forend consists of an underslung Weaver/Picatinny accessory rail that extends from the lower section of the action to reach under the neck section of the forward-mounted 425cc buddy bottle. Obviously, this gives you the option to fit certain accessories but also protects the neck and connection area of the bottle from knocks that could inadvertently cause damage. So, in that respect, its quite generous length is a bonus as it can also be used for your leading hand hold or if you prefer, it will enable you to fit a suitable militarystyle drop-down forend grip or bipod.

The rifle takes an onboard fill of 250bar via a foster-type bayonet connector that is positioned under the rifle between the trigger guard and the accessory rail. The regulated action gives 200 metered shots in .177 calibre and 240 in .22 calibre, as per the rifle on test. The Ixia is also available in .25 calibre, so you can expect approximately the same shot count as per .22.

There is an air gauge to display the onboard air reserves and it is positioned on the right-hand side of the action, just forward of the buddy bottle and above the accessory rail.

At the very rear of the butt section, on the right-hand side, is a large power adjuster dial. This is useful for situations where you might want to lower the power in order to increase the shot count and/or to avoid ricochets when shooting rats and feral pigeons indoors at close range. The dial can adjust from approximately 6 ft/lbs up to 11.5 ft/lbs and is duplicated on the opposite side, but is not marked up with the power settings.

Incidentally, you will notice that there is also an air regulator gauge that is positioned above the pistol grip, and just forward of it is a blanked-off section flanked by opposing vertical arrows. This has been done for the UK market so that it can’t be tampered with.

The action uses a biathlon-style sidelever which is ideally positioned for fast action shooting, plus its relatively short length of travel makes it doubly effective. Southpaws will be pleased to note that the lever can easily be changed over and fitted to the left-hand side. It operates very smoothly and quietly, plus, like the rest of the Ixia, it is certainly well-built for field use.

The lever runs a 12-shot, perspexfronted sprung magazine or if you prefer, you can use the single-shot loader. I’m sure most will use the rifle as a multi-shot and the filling procedure for the magazine is a familiar one.

After pulling back the side-lever, the magazine exits and enters from the left of its housing, which is found at the top and towards the rear of the butt section. At first, an unusual trait, as most multishot guns have the magazine enter and exit from the right. They also go in round end first with the straight section with loading aperture to the top left, and the perspex cover plate facing you

To load, you first rotate the clear plate clockwise against spring tension until it comes to a natural stop. Using a finger, cover the hole in the face plate, then reverse the magazine and load the first pellet skirt first into the empty chamber. Next, turn the magazine around and let the cover plate return to its original position under control, while loading pellets head first into the rest of the empty chambers as they appear. The magazine holds 14-pellets in .177 and 12 in .22 calibre.

The Ixia, like many other ‘pups’, has a raised rail for scope mounting. This one is a MILSPEC 11mm (dovetail) and Weaver/Picatinny rail. I scoped up with a Hawke 4-12x40 AO AMX, which I found well suited to the rifle. A bonus of the rail is that, unlike some bullpup designs, it isn’t raised overly high from the action, so a sensibly sized scope can still be mounted quite low to the bore.

The 2-stage match-grade trigger uses the post and shoe design and has a unique manual safety catch that is actually part of the metal trigger guard. Some will find this strange but will soon take to it as it operates extremely positively. When up in the closed position the catch/hinged lever is on SAFE and when pushed down, the rifle is ready to FIRE. There are even white etched indicators on the rear vertical section of the guard. These are a letter S and a letter F below it, separated by a double-ended arrow. It’s ideally positioned for disengaging or re-engaging with the trigger finger and as the catch has an extended paddle-shaped end, your forefinger isn’t in danger of touching the trigger. This is because the paddle shape also extends outwards on both sides.

The rifle boasts a full barrel shroud with an integrated sound moderator. It’s quite efficient and holds baffles encased in sound-deadening felt, plus there are also multiple air vent holes at its base, near the action. These allow air to be redirected down and expelled through the gap between shroud and barrel, therefore cutting the report to an acceptable level. However, should you wish to fit a secondary can, then the muzzle is threaded ½” UNF. The threads are covered and protected by a chunky metal end cap.

You can’t argue that the Reximex Ixia does take a lot of design cues from various tactical-style models of FX, but that’s no bad thing, and it isn’t a blatant copy. Also, although the market is awash with bullpups, the Reximex Ixia stands out as it has some unique features and attributes of its own. The handling and balance are superb, and the side-lever is a credit to the standard of engineering found in key areas of the rifle. It’s accurate and considering the price, it is definitely a ‘pup’ that’s well worth looking at should you be in the market for such an air rifle.

Thanks to T & J. J McAvoy LTD for the loan of the test rifle