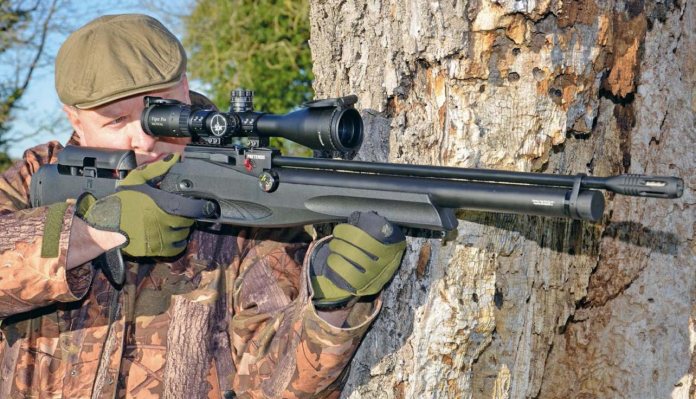 When I tested the Myth a few months back, I hadn’t even heard of the Turkish brand, Reximex, but since then a host of models have caught the eye, all aimed at showing off the company’s modern manufacturing operation. These new upstarts (circa 2015) make a big thing of their state-of-the-art production facility, and on test here is the Pretensis, which is another stylish rifle from this relatively new name in airguns.

I had to double-take as I checked out the instruction manual, as this model is actually known as the Daystar in other markets - a name which would surely arouse a certain company’s legal team if launched in the UK! However, Pretensis it is, and first impressions are of another super stylish airgun, genuinely brimming with features.

Styling-wise, the adult proportioned synthetic stock looks the part, and with an adjustable butt pad and comb all part of the design, it’s a great start. The action is the same as the Myth, but here this model sports an extended 260cc slimline cylinder, again fitted with a front-mounted quick-fill valve. There’s a factory air-stripper, cross-bolt safety, fully adjustable trigger and shoe, sling swivel studs, twin-rail mounting system, power adjuster, manometer, side-lever action, two magazines supplied as standard and even a single-shot loader. On paper at least, that’s one hell of a spec sheet, certainly for an all-in asking price of £579.

Take the Pretensis out of its cushioned protective box and it’s a striking airgun for sure. The black synthetic stock does feel a little bit ‘plasticky’ to be honest, with the butt section sounding a bit hollow in places, yet I’m surely nit-picking, given the configuration is not only visually pleasing, but entirely practical. The rather Ultimate Sporter- Esque forend just feels right, with those generous finger grooves and the deep section forward of the trigger guard - a boost to standing shots for sure. Ambidextrous it may be, but it’s difficult to fault the feel of that attractive pistol grip.

Look to the rear, and as the spec sheet promised, there’s both an adjustable cheekpiece and rubber butt pad. Press the spring-loaded button and the comb can be raised in pleasingly small increments, giving up to an extra inch of height. Set this up in conjunction with a similarly controlled butt pad and eye scope alignment will be just about perfect. Being able to replicate a consistent head position is a huge bonus and a key part of the performance equation at the end of the day.

The metal finish is pretty good too, with evenly applied bluing to the barrel and a practical matte black coating over the cylinder and action.

Make your mind up

Charging the system is fairly simple, although conflicting info comes with the gun being stamped with ‘Max fill pressure 250 bar’, and the instructions saying not to charge over 3000psi/207 bar. I adhered to the instruction booklet and stayed with a 200 bar fill, which means less high-pressure stress on components in any case.

Filling is via the probe-style adaptor supplied. Locate the valve at the front of the cylinder by pulling off the frictionfit cap, insert the airline and gently fill the system. Keeping track of residuals thereafter is easy, courtesy of the sidemounted manometer, which is not only in a safe position, so no looking down the barrel (well done Reximex!), but also surely one of the clearest available.

As mentioned, Reximex supplies the Pretensis with a plastic, single-shot sliding block and also 2x cassettestyle magazines. The mags feel nicely made and suitably precise, given their important duties. My test model came in .177 calibre, and these get 14-shot magazines, whilst .22 airguns come with 12-shot versions.

To fill the mag, first, twist the clear top cover all the way round clockwise, then when the hole lines up and you can see through, hold the cover in position against gentle spring pressure and drop the first pellet into the open chamber. This will lock the mechanism, and it is now possible to turn the cover back anti-clockwise, dropping a pellet nosefirst into each available chamber in turn.

Reximex offers these rifles with a clever dual system of mounting. Look to the action and the inner rail is for dovetail mounts, whilst the outer section is for Picatinny, whereby a small metal bar on the mount base locates into a corresponding gap in the rail. In short, fitting a scope to the Pretensis should be straightforward.

Side-lever cocking is becoming ever more popular, and the system installed here works well. The lever is nicely shaped and comfortable in use, given the angle and clearance away from the action. Cocking the lever takes more effort than some rivals but it all works smoothly and is still no big deal.

To fit the loaded magazine, pull the lever back to cock the action and set the trigger. With the lever open and the pellet probe clear of the breech, the mag can be slid into the slot from the right-hand side. This can be just a little fiddly, given that a small guide line needs to locate into the slot, but once in position, with the lever closed, the first shot is ready. Subsequent cocking indexes the next shot, and on test, I couldn’t fault the shots cycling through.

For the record, the cross-bolt safety catch on the Pretensis is manual, so not of importance, unless you insist on using it. If you do though, be aware that my test rifle’s safety only allowed the shot to be released when the crossbolt was sitting in the middle position.

So what of the trigger here? Well, it’s a suitably sensitive 2-stage unit. As supplied for test, my rifle came set up fairly light, so with my limited skills in trigger adjustment, I prudently left it well alone. Opt to make some fine adjustments, then the stock needs to be removed first, which can become a little tiresome in my experience, when trying to get the final setting just right. Minor irritation apart, the trigger also features a well-shaped and adjustable shoe. Just slacken off the small Allen screw and rotate, raise or lower the shoe around the axis rod. Nice one.

Look to the muzzle, and that factory fitted air stripper really looks the part. Look inside, and there’s no cone, rather an inner ported tube, and whilst I truly appreciate the visuals here, the fact is that the Pretensis is flipping noisy to use. During testing, I took advantage of the 1/2” UNF fitting at the muzzle and screwed a silencer into place, which instantly killed the decibels to a muted level.

So now for the figures, and at this point, it’s worth mentioning that this airgun comes with a power adjuster feature. Look to the right side of the action and there is a red control lever. Up for plus and down for minus. Set to the lowest and you can expect around 5 ft/lbs, whilst the mid setting is around 7 ft/lbs, and shot count will of course dramatically increase on the lowest setting.

On full power, from a 200 bar pressure fill, and using Air Arms Diabolo Field pellets, I clocked around 70 shots. However, with no regulator fitted the power curve was quite marked. OK, a total velocity spread of 110 FPS is fairly wide, but for more serious work, look to the first 42 shots and consistency dramatically improves.

I’m never that hung up on a huge shot count in any case, and one thing is for sure here, like the Myth previously tested, this Reximex proved blisteringly accurate. Groups measuring 1/4” c-t-c right out to 40 yards had me rushing up to the target stand to check the results, and it still excites me to see an airgun performing on the button. Incidentally, the groups were produced with and without the air stripper in place, so I would say silencer every time.

Overall, the Pretensis is another pleasing gun from Reximex. Admittedly, it’s a bit rough around the edges when compared to some of the established players, but it’s cheaper. Excellent down range accuracy always wins me over, and couple that with the user-friendly format, and this model will I’m sure, find many fans.

Thanks to Range & Country Shooting Supplies in Sleaford, Lincs for the kind loan of this rifle.