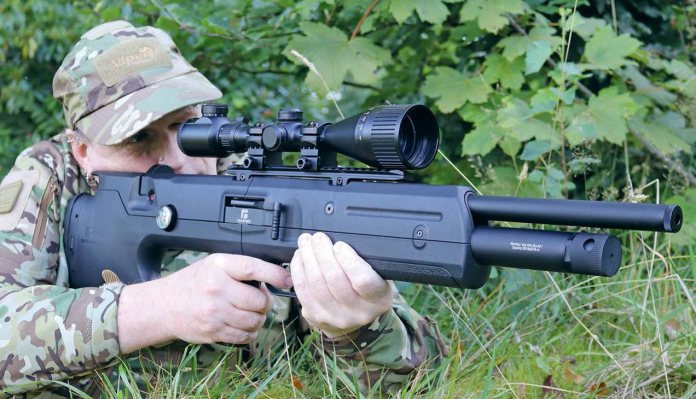 My first introduction to the Reximex brand of airguns was when I tested the IXIA bullpup. This time, I’ve had the chance to pick up one of the latest launches from the Turkish manufacturer - the Regime. Again, it’s a bullpup, and one that shows various design features that many will find appealing.

The Regime has quite a distinctive, deep-bodied, ambidextrous synthetic stock. There’s no cheekpiece, due to the top of the stock running completely parallel for its entire length. The butt section does however include a height-adjustable butt pad, like the IXIA. It is adjusted and positioned using a release catch found midway along the stock, positioned adjacent to the moving pad. When pushed in from the right of the stock, the oblong-shaped release catch allows the rubber section to be moved to the desired height, then when released it locks it in place. Also, the outer face of the pad has a honeycomb effect to aid security in the shoulder rather than being ridged.

There are plenty of cosmetic curves and contours at the aft section but the main ones to consider for handling are the very generous thumbhole and a steep drop-down pistol grip. The grip has a palm swell and deep finger ridging on the front face, which combine to make it feel solid in the hold. It’s also a very stable and comfortable platform for optimum trigger control.

The stock follows through to the forend, which displays a slab-sided, deep profile upon leaving the integral trigger guard, and from here curves upwards and inwards with a slightly rounded underside until running forward to end quite bluntly, and way short of the end of the air reservoir. The stock also shows stippling on the grip and along and underneath the forend.

Included with the rifle is a relatively short run of synthetic Picatinny rail. This can be fitted to the forward section using the pre-drilled metal grommet integrated into the underside of the forend at the required position. An accessory rail such as this can be used for a light, laser or bipod. However, it’s only fixed at one position using a large recessed Allen head screw, so can easily move around. You’ll need to ensure it’s fitted parallel to the rifle bore and fastened tightly if you require a laser to remain accurate once set.

There are two lateral spirit levels found atop the butt and midway along the forend within the scope rail. Obviously, they won’t help you counter cant, but if you’re zeroing your scope for distance shooting, then you can ensure it’s completely level on a pair of shooting bags when setting your zero.

The rifle’s air reservoir takes an onboard fill of 250-bar via a fill probe connector. The inlet port is at the front and protected by a metal ridged cover cap that rotates to hide the port or to reveal it for filling.

The unregulated action is rated at returning approximately 130 shots in .177 calibre and 150 shots in .22, as per the test rifle.

There’s also a generously sized, easy-read, colour-highlighted air gauge to indicate the rifle’s air status. It is positioned above the thumbhole on the righthand side of the butt section.

A bit on the side

No surprise that the action uses a biathlon-style side-lever, which is ideally positioned for fast action shooting. However, it does tend to be a bit noisy on returning back to the original closed position when it contacts the side of the stock.

The lever runs a 12-shot, perspex-fronted sprung magazine in .22 or alternatively, a 14-shot magazine in .177.

After pulling back the side-lever, the magazine exits and enters from the right of its housing, which is found at the top of the butt section, approximately 3/4 of the way back towards the adjustable butt pad. To load, you first rotate the perspex faceplate anti-clockwise against spring tension, until it comes to a natural stop. Then, while still holding it in this position, place a finger under the magazine to cover the loading aperture, so the first pellet doesn’t fall straight through when you place it into the magazine. Next, rotate the cover anti-clockwise and as empty chambers appear, place the remaining pellets into the magazine. Upon completion, fully rotate the cover until it returns to its original position. Now, although a tad unusual, with the rounded end of the magazine facing towards the right of the housing, slip it into the mag well until it comes to a stop.

It’s here that the rifle shows a slight niggle, because when you shoulder the gun the magazine extends out to the left of the action and protrudes above the aft section of the stock. This will feel a tad strange, but scope up correctly and you should just have enough stock behind the magazine to rest your cheek against. I presume this is why the stock is designed with a spur-like extension piece at the very rear.

As with many rifles of this nature, the Regime can be powered down. The adjuster screw is found on the right of the stock, just forward and slightly below the magazine well. Here, you will see a recessed, red, slot-head screw and directly to its right a scale showing the plus (+) symbol at the top (indicating maximum power) and a minus (–) symbol below (indicating the lowest power setting), with graduation marks in-between. Now, the company has factored in the times you might forget to take a screwdriver into the field, so the adjuster tool is actually part of the rifle. The handle of the side-lever can be unscrewed and has a slot-head driver built into it. However, the adjuster on the test rifle was very stiff, so I’d adjust the power with a standard screwdriver and check the power level over a chrono at home, should you wish to lower the power output. This can be beneficial when shooting rats at very close range, where a miss might cause a dangerous ricochet. Generally, you’ll find on the lowest setting that you will have a power setting of around 4-5 ft/lbs (for plinking) and 11.6 ft /lbs on the highest power level for legal limit hunting.

Another surprising feature is the lengthy Picatinny scope rail, which sits flush to the top of the stock and can actually be adjusted for extra elevation. After scoping up with a Richter Optik 3-9x50AOE in high mounts, I zeroed the scope at a sensible airgun hunting distance.

The 2-stage match-grade trigger uses the post and shoe design and features an in-guard manual safety lever just forward of the main trigger blade. Just push it forward for FIRE and rear for SAFE.

The match-style shoe and post are certainly being seen on many PCPs these days, due to the level of adjustment they offer, as you can adjust the height and angle of the shoe in order to attain full trigger contact.

The rifle also boasts a full barrel shroud with an integrated sound moderator. It’s extremely efficient at taming muzzle report and thankfully so because the muzzle isn’t threaded to accept a secondary can.

Without a doubt, the Reximex Regime has many plus points. It handles and balances well, feels solid on aim and is secure in the hold. It’s highly accurate out to sensible hunting ranges and the barrel shroud’s integrated sound moderator is extremely efficient. My main gripe is the magazine configuration when in the housing, as some will find it alien to have the body casing so close to their face. However, it doesn’t hinder eye scope alignment, and most will soon get used to its presence. So, in all fairness, the Regime proves to be yet another very well-priced bullpup from the Reximex stable and ideal if you’re entering the PCP bullpup arena for the first time.

Thanks to T & J. J McAvoy LTD for the loan of the test rifle