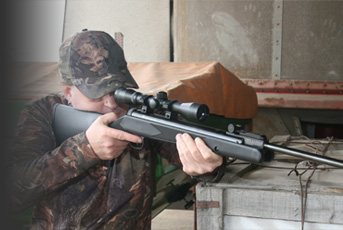 From the outset I’ll impart the information given by Armex - the exclusive importers of these air rifles - as to the Ruger brand names, as it’s their famous eagle logo that’s emblazoned on the action. Apparently there’s a major association with Umarex in relation to these rifles even coming into being.

It seems Umarex have sourced these rifles and, as is their policy with CO2 products under licence, they pay to use a famous company’s brand name if the product is a look-alike - for instance Heckler & Koch or Beretta. This time it seems that as these are air rifles they’ve chosen sporting gun manufacturing giants Ruger to go to for permission to use the name and logo. Clearly this has been granted but only after Ruger stipulated certain specifications be met, which drawing on experience I’d presume are of Far Eastern origin. So with that clarified, here are my views on the two ‘Ruger’ air rifles here on test - the Black Hawk and Air Hawk Elite.

Outwardly the two air rifles are cosmetically very different but intrinsically the rifles are one and the same because the internals, trigger, safety and break-barrel action are identical. So as you can imagine - it’s the stock and additional ‘outer’ features that set the two apart.

The Black Hawk is the more basic of the pair whilst the Air Hawk Elite offers features that many hunters today gravitate towards is certainly aimed at the more ‘discerning’ shooter. Incidentally, both rifles are at present only available in .177 calibre and come supplied with corresponding, Ruger-branded optics and mounts. The Black Hawk with a fixed magnification 4 X 32 and the ‘Elite’ having a 3 – 9 X 40AO. With that explained, let’s look at what each combo has to offer.

The Black Hawk could well be seen as the introductory level gun but on closer inspection the all-weather synthetic stock is surprisingly comfortable to hold – despite having no cheek piece. It boasts large twin panels of moulded chequering at both the grip and forend and for a rifle of this type balances well both with or without optics. I say this as it features a set of fibre optic enhanced open sights. The raised foresight has a red insert, while the fully adjustable rear unit has a pair of green rods flanking the U-notch; these line up nicely and work well at iron sigh ranges. Large, serrated edged, numbered thumbwheels alter windage and elevation and if you want to shoot straight from the box they’re well worth setting up if you fancy a plinking session or a simple close to medium range blat at rats or feral pigeon.

Incidentally at the breech it’s obvious the actions are one and the same as the Elite (that doesn’t have open sights) clearly has blanking screws on the top rail where the rear sight unit is fixed onto the Black Hawk. As the rifle comes with a scope, I immediately discovered the dovetailing is very short (only 4”) and positioned at the rear, taking up more space is a recoil strap. If you prefer, this can be removed but further into the test both rifles showed to be very low in recoil for full power springers so it’s a feature I found unnecessary.

Talking of the unnecessary, both rifles break easily at the breech and cock smoothly, after ‘thumbing’ a pellet directly into the barrel they also lock securely back up. This does beg the question why the ‘Elite’ has a muzzle weight rather than a silencer. I say this as it isn’t needed as a cocking aid or to help quell recoil so in my opinion is purely cosmetic but for the price I’m sure most hunters would have preferred a silencer.

That nicely brings me to the Elite. Whoever designed the thumbhole stock of this hardwood version of the Black Hawk must have been a big guy or have little knowledge of why the thumbhole configuration is designed to aid the shooter’s hold. For starters it’s far too thick and quite frankly feels unwieldy to the point that the timber now makes the rifle weigh 9lbs un-scoped as opposed to the Black Hawk that tips the scale a light and manageable 6.2lbs.

The Elite also has a fully ambidextrous stock with a cheek piece best described as low to medium height but very thickset. Also there’s no tapered channel from the thumbhole to allow the thumb, either for a right or left handed shooter to attain the comfort you’d expect of a stock of this design. Then again only Daystate in my book have an ambidextrous thumbhole that really works but you do pay a hefty price. But I digress and back to the Elite.

There’s no chequering at the steep, drop down, pistol grip but it does have two non-descript panels set either side of the forend. I must admit setting zero and testing accuracy wasn’t something I was beginning to relish. Fortunately, though the single stage, factory-set trigger has a bargain basement, slightly curved plastic blade, I did find it a redeeming feature and thankfully it’s common to both rifles. The mech releases shots without a hint of creep, is very predictable and the unit features an automatic safety button. Though barely more than a plastic toggle shaped ended bar that protrudes rearwards from the rear of the cylinder, when the safety is engaged it works a treat and is positioned just in the right place for the shooter to push in when ready to take a shot. If you decide not to, it can be reset by simply pulling the safety bar back to the engaged position where you also see the letter ‘S’ on the side of the bar, so visually indicating the rifles status.

Accuracy was more than acceptable with both rifles producing ½” groups at 25-yds with quality ammo which is the range I’d recommend most shooters stay within if hunting with these two.

This isn’t a bad start for Ruger and if the Black Hawk had come with the 3 – 9 X 40AO optic instead of the 4 X 32 I’d say this was a package deal well worth considering. In fact why they come with scopes is a mystery as if they didn’t and had longer dovetails then I feel that alone would have made a big difference to my opinion of both offerings.