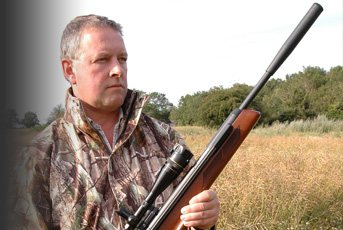 Airguns come in all shapes and sizes these days, especially with the advent of PCP’s, where the lack of internal mechanical ‘guts’ so to speak, allows for specialist lightweight configurations. In doing away with the cumbersome spring/piston internals, designers are left to their imagination as to just how diminutive they wish the design to be, and with many pneumatics now scaled down to suit, ladies and junior shooters have never been better catered for. PCP’s offer near recoilless performance of course, which just makes accurate shooting that little bit easier to come by.

At the other end of the scale however comes the super heavyweight class, and these take various forms. Target grade designs, either destined for the FT course or an indoor Olympic arena, mostly tip the scales between 10 and 11lbs; sometimes considerably more.

Yet some intriguing designs of airgun exist which offer a particular breed of shooter something different. If all that tiresome paraphernalia associated with pre-charged rifles seems a tad off putting, then there are alternatives - and the rifle on test here certainly comes into this bracket.

The Diana 56 TH is frankly a beast of a rifle, and a real technical marvel into the bargain. Consider that it weighs in at a whopping 11.1lbs before any glassware is installed though, and you may wish to turn the page now. If you’re still with me, then the chances are that you’ll be able to handle the sheer physical heft and operation of this model - and for those who fit the bill, an unusual and rewarding experience awaits.

The 56 TH is basically a spring powered air rifle which offers a semi-recoilless action, by virtue of a clever sliding ‘sledge’ system. The idea isn’t new, and is very similar in fact, to Air Arms’ sadly missed SR version of their popular TX200. Where Air Arms cited production costs as the cause of the SR’s demise, Diana have persevered, staying with the system and slowly revising along the way. This new ‘ TH’ spec is a fully upgraded version of their old Air King design, and as such it occupies a fairly unique position in the market place. The Airking still exists but as a separate alternative, but the 56 TH just adds a little extra refinement .

Functionality will of course be laid bare in just a moment, as first impressions need to be evaluated.

The rifle submitted by the official importers - RUAG Ammotec - for testing, had apparently seen one too many trade shows, so a few details apparently have to be forgiven, given that this model has done the rounds so to speak.

The Diana 56 TH is, as stated, powered via a spring and piston, with a side cocking lever action incorporated into the design. The lever in fact didn’t quite sit flush with the action on my test rifle, yet given Diana’s usual high build quality, I’m prepared to put that detail down to rough treatment from those previously mentioned trade shows.

‘TH’ in the name specifies ‘Target Hunter’, and with a range of rifles in the Diana stable now sporting this suffix, the slick branding certainly comes across where first impressions are concerned. Specialized thumbhole stocks really elevate these rifles, and the one fitted to the 56 is a chunky, bold affair, offering plenty of detail where it matters. The wood is actually beech, yet with a matt varnish applied, plenty of pleasant graining shows through. Throw some well executed chequering into the mix, and the spec list begins to take shape nicely. I’ll come back to the woodwork, but let’s just give this 56 the once over.

The manufacturers intend these rifles for hunting and also Field Target, and with all the metalwork treated to a glass bead blasted finish, the resultant overall appearance is one of a smart, well engineered rifle for the connoisseur. That anti-glare finish is of course of use to the field shooter for obvious reasons, yet given this particular Diana’s weight, I for one would look elsewhere for a hunting rifle. Much of the mass comes from solid fittings, yet the nature of the action, and the additional components needed to create the sliding action, will inevitably add up to a dense piece of machinery. A solid bull barrel, complete with a significantly heavy barrel weight (held by two grub screws and easily removable) is mainly responsible for the balance being biased towards the muzzle, but this front heavy aspect had me appreciating the handling, if not the overall weight.

Sporter Class FT is a different ball game to hunting forays altogether; and here, the 56 TH seems well equipped for action. That deep box section of wood just forward of the trigger guard, is just perfect for the classic over-the-arm FT sitting position, whilst also specifically catering for supported standing shots. Where many FT shooters look for add-on raiser blocks (hamsters), the fact this rifle comes with one effectively built in, is a great feature. Eye to scope alignment is therefore assisted, along with a nicely pronounced and well defined cheek piece. Couple that with a Wegu syle adjustable butt pad, and the discerning competitor is half way there.

An overhead glance down the seam of the stock reveals a totally ambidextrous configuration, with no side finger grooves and an absence of any thumb shelf to the rear of the grip, handling isn’t quite as good as some rivals, despite an otherwise impressive and striking design.

Initial testing was done at the chronograph, and although consistency with two of the favoured pellets was impressive, actual energy levels produced were down on the manufacturers stated figures. Again, having tested many quality rifles from the Diana stable of late, I would put the low power down to this example being abused as a show rifle, especially since it sounded a little harsh too.

One major point to make with these rifles concerns recoil - and the point is best made by explaining the unique cocking/firing cycle. To cock the 56 TH, the side lever is pulled all the way rearwards until resistance is felt. At this point, the lever is pulled back even further which then pulls the entire action of the rifle rearwards by around 13mm. The piston is engaged and the trigger set, once this operation is complete. If this cocking stroke is done with sufficient momentum, then it can be completed in one. For the less fit among us, a short breather can be taken before that final pull of the action is achieved.

With the action cocked and the breech open, a pellet can then be pushed directly into the exposed barrel. A safety anti-bear trap ratchet device is fitted, which is fairly vital in a design of this type. To return the cocking lever to its original position and close the breech, the large teeth of the ratchet have to be disengaged. This is done by depressing the knurled button to the left of the breech.

One criticism I have of this rifle (and of its Airking stable mate), concerns the fact that the cocking lever - in my opinion - should be on the left hand side of the action. Being right handed, the lever is naturally pulled back with the right hand. Yet I then find myself wanting to load the pellet with the right hand, meaning the lever has to be left unattended. Years of HW77 use has instilled a safety drill where the lever is held at all times. Any departure from this just leaves me a little uneasy, despite those huge teeth visibly doing their job.

Accuracy was good with regular half inch groups at 30yds (RWS Superdomes) the norm, shot from a sitting position. Strangely, I found I could better this more often than not from the kneeling position, and despite the action resonating and clearly in need of a tune up, felt recoil was minimal, as the sledge system had the desired effect. Recoil is still an issue though, and here’s why. Just as it was with the ‘SR’ of old, this style of rifle transfers a significant amount of recoil to the scope and mounts as the action snaps backwards through that additional 13mm of movement. During the test period, I had a one piece mount move slightly, although recoil stud holes are machined into the scope rail to eradicate the problem.

The Diana 56 Target Hunter is certainly an original. It’s heavy, relatively expensive, and definitely not for the feint hearted - yet undeniably enjoyable to shoot. If soulless pneumatics leave you cold, and just thinking about the demise of the Whiscombe brand brings a tear to the eye, then these highly capable handfuls just maybe the answer, for a unique and self-contained, semi-recoilless shooting experience.