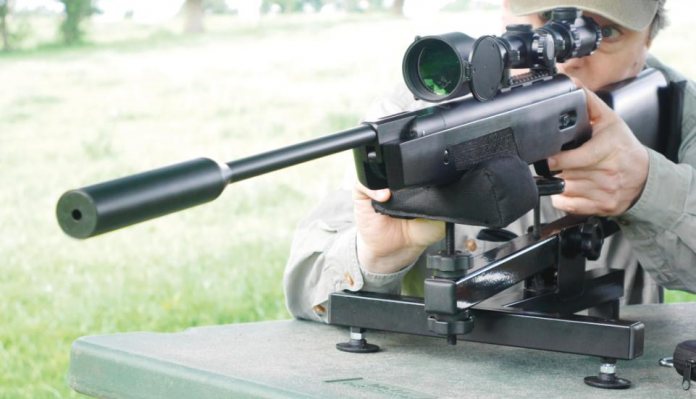 In recent years, SIG Sauer’s US operation has been growing like Topsy: making new inroads in the defence sector; establishing a successful electro-optics venture and creating an airgun division -SIG Air- to bring their name, designs and values to the widest possible market. Most SIG Air products are CO2 replicas of their service and personal defence handguns, carbines and rifles but the one that caught my eye is the ASP20, a single-shot, break-barrel, gas-pistonpowered air rifle, purposebuilt to deliver 20 ft/lbs of muzzle energy. Could this be a viable alternative to a PCP for pest control situations requiring more reach than an off-ticket air rifle can provide? To find out, I contacted distributors Highland Outdoors, who kindly sent me an example to try in .177.

The US-made ASP20 is a man-sized gun with the practical air of a defensive arm. The metalwork has a matte, scratch-resistant, black finish; the cylinder is topped with a 135mm Picatinny optics rail, and the 350mm barrel is tipped with a 170mm sound moderator. Both the rail and moderator are permanently attached. The stock, meanwhile, is stained a business-like grey-brown colour that SIG call ‘onyx’. It features crisply laser-cut SIG Sauer logos and stippled grip panels, plus is finished off with a solid rubber recoil pad. Above the trigger, distinctive inlets on each side of the stock house manual safety slides, revealing the ASP20 to be that rare thing: a fullyambidextrous rifle.

SIG’s literature makes much of the airguns solid, consistent ‘Wedge Lock’ barrel lock-up and the smooth ease of its ‘Glide Lite’ cocking stroke. They are right to do so. The former uses clever wedge-shaped geometry to ensure precise, repeatable alignment between barrel, breech and cylinder; and the latter eliminates the grunt associated with hauling back the barrel on a FAC-rated ‘springer’. A breech-to-muzzle distance of 500mm helps too, offering plenty of leverage.

Of course, you need to be able to reach that muzzle to apply the solid slap necessary to overcome the vice-like grip of the spring-loaded breechlock. If, like me, you find that a stretch, you will have to strike the barrel more forcibly, which soon becomes uncomfortable. In the field, the level of noise and movement required makes this a gun you would want to cock before sighting your quarry.

Cocking the rifle engages an anti-bear-trap mechanism. Given the power of the ram, this makes sense, though it does mean that the only way to de-cock the rifle is to shoot it. As you never want to cross a gate, fence or ditch with a cocked and loaded gun, the ASP20 is, therefore, better suited to ambush tactics than stalking the hedgerows.

SIG are also proud of their adjustable trigger unit. It’s certainly different, but not necessarily in a good way. First, there’s the blade. Long, wide and straight, except for a little lip at the bottom, it is styled after the Matchlite units fitted to some SIG centrefire models. The design may be ideal for a fastshooting 5.56 carbine, but a single-shot rifle requires a blade that guides your finger to one, optimal, point every time and the ASP20’s trigger doesn’t do that.

There’s no first-stage adjustment, so that remains quite long and heavy. For the second stage, a small hex-bolt behind the trigger controls how the first stage ‘transitions’ into the second (increasing or decreasing the ‘hump’ you feel at the end of the first stage); and pull weight can be altered via a spring-loaded crosshead bolt hidden in a recess within the cylinder end-cap.

The placement of the bolt means that it is best adjusted before mounting a scope, but SIG does provide an S-shaped, double-ended screwdriver which can be used with an optic fitted.

Changing the setting involves depressing the bolt, giving it a quarter turn, then lifting off and giving it another quarter turn. A click indicates that you have increased/ decreased the weight by 2oz. There are eight gradations available, giving a stated range of 4-2.5 lbs. The system prevents the trigger from being dangerously over-lightened, but there’s a definite knack to it. The lowest actual setting was 1.7 lbs, which was a bonus. After adjustment, the trigger was much more manageable, but achieving consistency still required my full concentration.

Careful management The ASP20’s recoil impulse needs careful management, too. The stippled panels on the slab-sided fore-end help with this, but the pistol grip isn’t optimised for either a ‘wraparound’ or ‘thumbup’hold and the butt-stock dimensions didn’t work for me: the comb sat too low, the heel too high, and the lack of pitch to the toe meant that this was typically the only part of the butt in contact with my shoulder. As such, I reckon a good adjustable aftermarket cheek piece and butt pad would work wonders for the rifle’s back-end ergonomics. I can’t fault the quality of the stock, however, whose smart external finish is matched by neat internal inletting. “Well done, SIG!” I thought, until I saw the discreet Minelli qualitycontrol sticker! A nice detail is the alloy bushings for the barrel bolts. It’s just a pity SIG chose to use cross-head bolts and screws throughout, cheapening the overall look.

I shot the ASP20 with a variety of pellets, including the superficially-similar H&N Baracuda Match and SIG Wraith designs; as well as JSB’s Exact Diablo, Express, RS, Heavy, Hades and Monster variants. Some pellets were such a tight fit in the barrel that a tool was required to seat them flush, yet despite this, the 4.52 JSB Exacts outperformed the 4.50 and 4.51 sizes.

Best consistency was achieved with 8.44-grain JSB Exacts, 10.34-grain Hades and 10.34-grain Exact Heavy, with extreme spreads (ES) of 6, 6 and 7 fps, respectively. These also did well on energy, giving 18.9, 18.6 and 18.7 ft/ lbs; figures closely matched by the RS and Express designs. Surprisingly, despite being the same 10.65-grain weight and shape as H&N’s Baracuda Match, SIG’s own copper-coated Wraith pellets produced 3 ft/lbs less and scored worst on consistency, with an ES of 26 fps.

The energy figures above are obviously below the 20 ft/lbs enshrined in the ASP20’s name. I was wondering if the rifle perhaps needed more than a couple of hundred pellets to run in, then I saw in the manual that the advertised power figure is based on results with ultra-light pellets, even though the same page recommends using heavier weights for best accuracy!

In my tests, the lighter JSB 7.3-grain RS and 7.87-grain Express pellets also produced the highest energy figures. Nevertheless, for hunting, I chose the 10.34-grain JSB Hades, as their better energy retention gives a measurable advantage downrange. Thus, even though standard Exacts enjoyed a small advantage over the Hades in point- blank range (10m-47.2m vs. 9.6m-46.3m, based on a 30mm kill-zone and a 41m zero), at 60m the Hades delivered 5cm less drop, and dumped a full 11.99 ft/lbs on target (4.32 ft/lbs more than the Exacts), ensuring fast and full expansion of their radical design.

The big challenge was to get that energy on target. I’ve no doubt the ASP20 has the inherent consistency to do it, but finding, maintaining and repeating the optimal hold and trigger technique requires dedication, practice and more than a modicum of skill. Time and again I would start producing a thrillingly tight group only to make some slight change to my stance or timing that ruined it. And while the physical investment that goes into every shot does concentrate the mind, every reload also adds fatigue and requires you to rebuild your position from zero.

In conclusion, if you don’t already have a PCP and its associated paraphernalia, I reckon a flat-shooting breakbarrel rifle like this could be an excellent addition to your on-ticket armoury. Does the SIG fit the bill? Up to a point. The barrel lock-up gets full marks, as do the Picatinny rail, the ambidextrous build and the stock inletting, plus I like the aesthetics. The trigger needs careful adjusting and operation but it’s a pity there’s no de-cocking function. If this were my gun, I’d be looking to add an adjustable comb and butt-pad as well as fit a curved trigger shoe to favour a consistent, predictable let-off and improved recoil control. I’d fit some sling studs, too. Oh, and I’d also get some hex-head stock bolts and safety-slide screws to replace the naff cross-head ones!