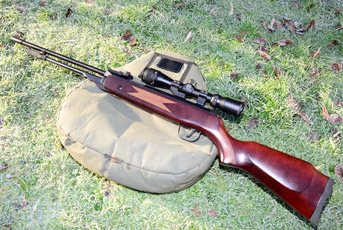 When you consider that the weakest point of any break-barrel design is the break barrel design itself… so it should come as no surprise just how popular the under-lever concept has become.

Break-barrels rely on the barrel being hinged at the breech, and doubling up as the cocking lever, to compress the mainspring. Wear at the breech over years of use, can occasionally result in an inconsistent barrel lock-up, with small amounts of shift in the point of impact, the result. Of course where the very best quality examples are concerned, this is rarely an issue. Yet the theory holds true.

Under-lever rifles in contrast, offer the shooter a rigid fixed barrel arrangement, with a separate lever held beneath, which is used to cock the action. On paper at least, fixed barrel accuracy should outshine the break-barrel, so it’s little wonder that manufacturers bring out their own takes on this highly popular theme.

Sportsmarketing (SMK) have become one of the largest suppliers of airguns to the market place, and on test here is their brand new SMK DB5 model. In keeping with the majority of their products, the emphasis is on value for money, and at £99.95, it certainly looks a bargain.

Technical improvements are included inside the DB5 too, with the air transfer arrangement featuring a cone-shaped breech which dovetails into a conically shaped cylinder-end, complete with a conical seal. Apparently this design allows for a shorter transfer port, which improves air flow - with the manufacturers claiming ‘more power for less recoil’ as a result. More on this in a while.

There’s no doubting the appeal of the new woodwork, and first impressions of the DB5 are very favourable. That rich walnut lacquer contrasts well with the chequered panels, and while the laser patterns are extremely shallow, they do add detail to an otherwise conservative design. Few guns of any note come in cheaper than this rifle, so it’s fair to say that the few minor dents and imperfections on the stock can be overlooked. These rifles are intended as starter models at the end of the day, and manufacturing down to a price has to be accepted. The cheek piece is defined for the right handed shooter, yet given the subtle definition, it may as well be considered as an ambidextrous design.

What stands out for me though, with this rifle, is the action. The finish and precision of the engineering is a huge improvement over earlier similar models that I have seen. Add to that the attention to detail, and the DB5 begins to impress.

Fibre optic open sights come as standard, and the rear-sight is fully adjustable via thumb wheels, for both windage and elevation.

Cocking the DB5 is easily done by first unclipping the lever. Two points of note here; yes the sprung retaining clip is crude, but the inclusion of a rubber handle on the cocking lever is a really nice touch.

Pulling the lever all the way down until the trigger engages, requires only modest effort too, and is another impressive plus point. Cocking the action also slides the breech cover back exposing the conical breech; a pellet can now be pushed home directly into the barrel. Another two points of note here. Firstly, chambering a pellet can be a fiddly business, given that the lip of the breech is set back a little, and the chamber itself is fairly narrow. So while this is a good starter rifle, I would say they aren’t exactly user friendly for the youngest beginners.

The second point concerns safety, and applies to any under-lever rifle. Whilst the DB5 comes fitted with what’s termed an anti-bear trap device (a built-in mechanism designed to prevent the sliding cylinder from moving forward whilst loading), ‘best practise’ dictates that the under-lever should always be gripped firmly, whilst fingers enter the loading bay – this applies to any under-lever rifle, no matter what mechanical safety measures are built in.

Trigger wise, a pseudo two stage affair is fitted, but the test model’s factory setting wasn’t bad at all. Once the first stage had been taken up, the second stage released after no great effort, and with minimal creep. My only criticism concerns the blade itself, which is too narrow and, I would have thought a little too far forward for many shooters. I have big hands, yet I was at full stretch. A flatter, more set back design would be a big improvement. That said, consider the asking price, and this trigger still outperforms many competitors.

Firing the DB5 reveals a quick snap of an action. A little noisy maybe, but strangely, not from spring resonance.  As for the internal trickery, well don’t get too excited. There’s still recoil, but it’s perfectly acceptable for a rifle of this type, and more civilized than a few supposedly superior rifles I could mention.

SMK reckon on these guns producing around the 10ft/lbs mark, once run in, and my tests certainly bore out that claim.  SMK’s own Black Dome pellets supplied with the rifle, produced around 8.8ft/lbs, whilst RWS Superdomes came in right on the button at 9.9ft/lbs.

Accuracy wise, over 30yds, the SMK pellets produced average 1.25inch groups, but since they were tight in the barrel, I reckoned it was only fair to look elsewhere. An excellent sample of Superdomes seemed like an ideal choice, and sure enough those clusters shrank to half an inch at the same range. Excellent results from any springer, let alone one at this price.

In short, the DB5 really impressed. Quality control can often let this grade of rifle down, so I would advise you to try before you buy if at all possible. Yes it’s made down to a price, but the relative quality of the tested action and subsequent accuracy on offer, gives this rifle the accolade of the best Chinese made rifle I have shot to date.

A sign of things to come? Who knows.  Once things for sure, at £99.95, if my test model was anything to go by, the DB5 is a genuine bargain.