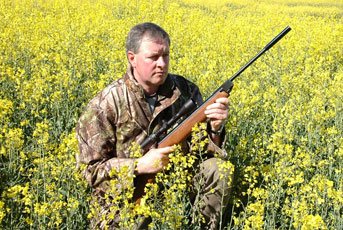 Sportsmarketing offer an incredible selection of shooting gear, mainly aimed at the shooter who wants to keep their budget in check. Their range of air rifles (the largest in the UK) has grown year on year too, and the custom SuperGrade XS20 model on test here, represents the top of their higher quality product line-up.

You could be forgiven for any double take on this model too, since the general profile has undeniably taken inspiration from the ever popular Weihrauch range of springers - the safety catch, cast trigger guard, and chunky breech bolts looking almost identical.

What sets this model apart from some other SMK models is the high quality chemical bluing applied to the main action and barrel. A rich, even lustre is achieved, and first impressions of the XS20 really are very favourable. OK, there’s a few scuffed machining marks on the barrel weight, and the finish applied to the trigger guard slightly detracts, but the overall feel is of a solidly built, nicely finished rifle.

So what we have here is an adult proportioned break-barrel model, capable of full power delivery, with a spec list that doesn’t come up short. The hardwood stock is particular pleasant, with the highly attractive grain patterns showing through the thick medium brown varnish/lacquer coating; basically allowing the natural beauty of the wood to shine’; and up close, it really is very attractive.

If I had to be picky, the fit of the butt pad was less than perfect, but bearing in mind that RRP, I think we can let it go - and to be fair, you have to look hard to notice. The rubber pad itself is nicely concave; in other words it hugs the shoulder when mounted.

Wood to metal fit is excellent however, along with the crispness of the chequering, applied to both the pistol grip and fore-end. Overall configuration of the woodwork is fairly par for the course, being namely that of a standard sporter stock, but with the subtly tapered fore-end, angled tip, and raised cheek-piece, I found the XS 20 handled very well indeed. Mounting a scope sees the head held in exactly the right position, which is just as well, given the absence of open sights. Setting up that scope in the first place, is made all the more easy, since an extended scope rail is machined into the receiver. With three arrestor stud holes on show at the rear too (classic Weihrauch again), the whole process should be, and is, a formality. Most spring powered air rifles will impart significant recoil to the scope/ mounts assembly, so the use of a small arrestor block, positioned ideally behind the front mount will solve this problem. Alternatively, many modern mounts come with the screw/tap-out arrestor stud in the base, ready to locate into the receiver, and that’s where those machined holes come in handy.

Cocking the XS20 is a revelation, requiring only a modest amount of effort to compress the mainspring and complete the stroke. The push-button safety catch is then automatically set, and the pellet can be chambered directly into the barrel. Again, no complaints concerning the breech lock up, with a reassuringly solid snap as the spring-loaded détente goes about its business. Those chunky adjustable side bolts on the breech are an added level of insurance against future wear in this area too, so all in all, full marks here.

The cocking stroke itself was fairly smooth on my test model, although the firing cycle was a little ‘twangy’. Bear in mind that many spring powered air rifles suffer in this area, as they come supplied from the factory, often with minimum lubrication, and it’s certainly no big deal. In short, this type of rifle will always benefit from a strip down and correct lubrication.

Trigger wise, the pseudo two-stage unit here is pretty basic, with an amount of creep inherent in the design. Yet again, bearing the asking price in mind, this level of trigger is par for the course, and perfectly usable.

I shot the XS20 over 25yds, using the brand new Thunder Bolt pellets marketed by SMK, but despite looking extremely well made, they just didn’t impress in this rifle. Falcon pellets faired even worse, yet (classic vagaries of the air-rifle) SMK’S own budget Spitfire pellets suddenly showed what the XS20 is capable of, printing groups just under 1.25 inch. I know for a fact that both those other pellet brands are capable of great accuracy, yet, if you were ever in any doubt as to the benefits of trying a cross section of pellet brands, take this as a perfect example. Get the right brand to suit your rifle and you’ll get good results.

Compatibility with the rifling in the barrel will always play a part in how accurate a particular brand of pellet is, yet interestingly, all three pellets were extremely consistent over the chronograph tests. Thunder Bolts returned just 6fps spread over ten shots, whilst Falcon Accuracy plus had a ten shot string with a spread of just 5fps. SMK’s own Spitfire’s, the most accurate on the day, were still highly creditable on 10fps. One thing’s for sure- the efficiency of the power plant behind the XS20’s performance, is beyond question.

In the XS20, Sportsmarketing have an extremely attractive contender for those after a budget spring-powered rifle, that offers the kind of civilized features expected by today’s shooter… and I have to say it feels and looks the part too.