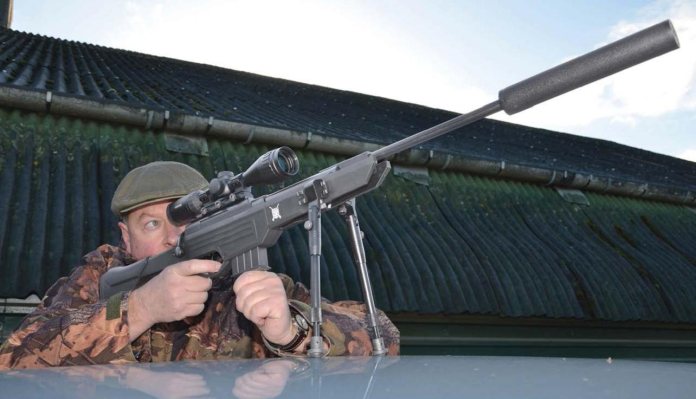 Sportsmarketing (SMK) are an astonishing operation and are still apparently the largest importer and distributor of airguns in the UK. That’s some boast, and with value for money their stock-in-trade, my test model here serves as a prime example of what this energized company is all about.

The SPEC OPS Sniper MKII is a real box of delights too since included alongside the rifle itself is a two-part adjustable bipod, 3-9x40 SMK scope, mounts, and even a sound moderator.

First impressions are dominated by the military styling. The synthetic thumb-hole stock features a nicely extended forend, complete with small Picatinny accessory rails on each side. The cheek is a bit low, but the shoulder butt pad is rubber, as is that sweeping and satisfyingly contoured pistol grip.

Product upgrades and alterations are a regular occurrence in any industry, as manufacturers strive not only to improve upon what went before but also to streamline their production methods. And so it is with the SPEC OPS here. In a previous incarnation, the dummy magazine was removable to allow small items to be stored within. I’m assuming it’s now fixed, as I couldn’t shift it! In addition, the rear section of the stock was at one time adjustable, and now that is fixed as well. Just an observation, as there are still plenty of positives that add to the user experience.

First up, fitting the two-part bipod is simple, since both legs feature a screw clamp that just bolts on tightly around their respective accessory rail. Thereafter, they can be activated by pulling the spring-loaded catch on the leg forwards, and then each leg can be angled down, where they lock into place. The catch is stiff, and this is an opportunity to catch the fingers, so carefully does it. Also, both legs are adjustable for height. Slacken the knurled ring and the springloaded bottom section of each leg will fly out. Nip up using the ring at any stage of length to set the height. If the shooter fancies shooting without resting on the bipod, then pull the catch and angle the legs up.

As with most gas-ram/ spring powered airguns, the inclusion of a sound moderator will have little effect on muzzle report, since the air doesn’t rapidly expand in quite the same way as a PCP, where the difference can be astonishing. The chunky moderator included here is undoubtedly a bit plasticky and rattly where my test gun was concerned, but it looks great and really helps to reduce cocking effort, given the added leverage afforded. The moderator is of the reflex variety, whereby the unit slides on and over the barrel, and has a threaded connector a good few inches up inside the tube. This has the benefit that it actually loses nearly two-thirds of its length by the time it connects and tightens in place, so adds only a few inches to the rifle’s overall length.

The scope that is included in the kit is also easy to fit and with high peep mounts supplied that just lock onto the Picatinny rail, everything can be set up in minutes. As mentioned, the cheek piece could be higher for a bit more support in the aim, but handling overall is very acceptable.

A fair assessment has to report back that the 3-9x40 scope that came supplied, did cause me problems when trying to zero in bright sunshine. I couldn’t help but swap it out temporarily for a tried and tested Hawke 3-9x40 model which I had available. In the sunshine haze, I came to the conclusion that the scope supplied didn’t have a particularly sharp image at the 25 yard zero/test distance; which at the time, was the case. However, returning to this scope on a cloudy day revealed a perfectly useable optic which rather caught me out. All well and good, but to be honest, this SPEC OPS shoots so well that it deserves a decent scope. Given the plethora of bargains available in today’s market, I reckon a small additional investment in this area has to make sense. Treat the kit scope as a starter and you won’t be disappointed.

I have always had a soft spot for break barrel airguns and shooting the SPEC OPS is an enjoyable experience. This is helped in no small part to that nicely shaped trigger (broad flat blade) that trips after only a small amount of creep, and that super comfortable soft rubber grip. As mentioned, the large silencer massively helps reduce cocking effort, and the process is smooth and fairly easy.

And so to performance. With the bipod legs bolted into position, it seemed only fair to try the SPEC OPS shooting from the bipod first. Groups of around 1.25” at 25 yards were fair and plenty good enough for some lazy plinking sessions. Although, the practicalities of cocking the break-barrel action then getting back in position to take each shot would somewhat stifle the fun.

Ultra close range hunting would be more practical, in a stakeout scenario, waiting for rats to emerge at a known location for example, and here the bipod comes into its own. There is, of course, the principle of spring-powered airguns and hard surfaces, and shooting from the bipod does mean the action isn’t as cushioned as it could be. Admittedly, I shot mounted from a shooting mat on concrete. Soft ground would help, but to get the best from this model requires respect for the recoiling action, allowing everything to move and vibrate naturally, unhindered. Expect best results to come from a stable cushioned and supported position then, in other words, without the bipod.

From my over-the-arm FT sitting position, on test, the SPEC OPS really shot well. It showed its true colours and proved super accurate in the process, with standard 16-grain FX pellets printing sub 1/2” groups at 25 yards. I had to adapt my stance and work around that slightly irritating dummy magazine, but the results speak for themselves. Yes, the gas-ram powered action here makes a surprising old clatter, with plenty of resonance on firing, yet given those terrific groupings, and easy smooth operation, I’d be prepared to overlook the din. As it stands, a total velocity spread of just 8 FPS over ten shots and energy around 11.9 ft/lbs on test, is excellent, and about as textbook as it gets.

Deal or no deal

Even allowing for the slightly delicate nature of the glassware included, this SPEC OPS Sniper MKII represents good value for money. A bundle of accessories adds fun and versatility for sure, but all importantly, what lies at the heart of the deal is an accurate sporter that can reward careful technique, making it a great starter pack or basic hunting model.