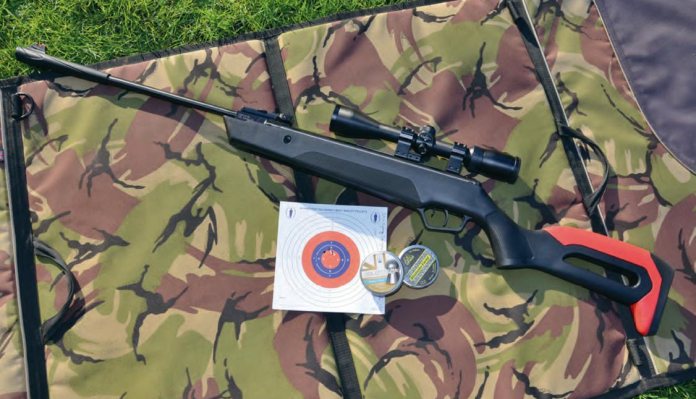 I’m always amazed at the number of airguns in the Sportsmarketing (SMK) catalogue, and they now cover most sectors of the market. Something for everyone indeed, and with much of their output aimed at the budget end, there are often bargains to be had.

Different model ranges reflect different quality levels too, and that’s a deliberate strategy at SMK, since much of the production costs can go into fine finishing and preparation of metal surfaces before assembly, for example. Restrict such refinement levels and the RRP can be reduced accordingly. Whilst the line-up includes a host of traditional spring powered models, again, fit, finish and performance can all vary by some margin. On test here is one of the break barrel springers from the SMK Supergrade range, and I have to say, having now spent some time with the SMK Synergy Supergrade B19-36, it’s a slick little number.

OK, that name is rather a mouthful, but as the ‘Supergrade’ bit suggests, this model gets the full treatment before leaving the factory. Mirror finish chemical bluing always looks the part and the B19-36’s barrel and main cylinder do just that. There are fibre optic open sights as standard, an extended foresight assembly that doubles up as a cocking aid, a 2-stage trigger, manual safety catch set inside the trigger guard, drilled dovetail scope rails and even an articulated cocking link.

Maybe too brash and lairy for some, but I just love the styling of that synthetic stock, and whilst the red contrasting profiled rear section has no bearing on performance, it’s a smart and trendy configuration if ever I saw one. High-quality moulding means those extensive panels of chequering along each side of the forend and around the pistol grip are super precise, and genuinely add to the level of grip. The angular forend is stylish and still manages to be comfortable in the aim, despite the slightly sharp edges underneath. The thinned down ambidextrous pistol grip is comfortable, and whilst some sections of the rear stock are hollow, the feel overall is impressive.

As mentioned in the spec sheet, this model comes fitted with very competent fibre optic open sights. My usual approach has to be reiterated here, namely that open sights can be a great introduction to learning the art of accurate shooting and to simply dismiss them at the outset seems not only sad and a waste, but a missed opportunity.

The foresight bead is formed by the red element up front and whilst it is vulnerable with no hood, that cocking aid assembly is long enough for the leading hand cocking the action to hold the barrel further back, thus respecting the fragility of the sight element. Do that and you’ll be fine.

The rear sight unit is well thought out, with twin green fibre optic elements forming the ‘notch’ and finger wheel controls for both windage and elevation. Neither has graduations marked, which is a little irritating, but the saving grace is they do have audible click stages. The bright sight picture created though, is excellent.

With around 7” of usable dovetail rail to use, and a long compression cylinder in any case, mounting a variety of scopes onto this rifle is a simple task, helped further by the hole for an arrestor stud that’s machined into the cylinder. Any spring gun is going to generate recoil, and the two-way recoil cycle can cause the glassware to shift in the mounts or the mounts themselves to move along the rails. On test, I used a Sportsmatch arrestor block sat behind the front ring mount, which deals with the problem neatly, but for peace of mind, the belts and braces approach is a one-piece mount.

A gentle jolt down at the front is enough to release the breech, and with the rubber butt firmly controlled in the groin, it’s fairly easy to cock the action and set the trigger, given the ample leverage from the 18.5” barrel and the cocking aid up front. Push home a pellet into the breech, flush to avoid deformation, and snap closed the barrel. For the record, the in-guard safety is manual as mentioned, but an internal bear trap system prevents the action from being fired until the barrel is returned to the closed position. A neat feature which obviously aids safety and peace of mind in equal measure.

Unsurprisingly, the 2-stage trigger is fairly basic, yet that broad ribbed surface goes some way to making up for the creepy build-up to release. Squeeze through the creep as the sears work apart and the final release isn’t too bad.

As for the firing cycle itself, it’s best described as very slick and quick, with quick meaning lock time, rather than hot internals. No spring twang or resonance on firing, just a slight metallic ring, which in my experience, often accompanies a well-tuned spring action. Let’s be fair, this model is unlikely to be fully tuned at the factory, given its remarkably reasonable asking price. However, the sophistication of the shot release certainly suggests a well thought out internal configuration, with some recoil calming measures and some appropriate lubrication employed.

On test, the airgun gave a good account of itself, posting around 11 ft/ lbs of energy over the chronograph, using a variety of pellets. The ubiquitous Air Arms Diabolo Fields just edged accuracy, with 1/2” groups over 30 yards, matched with a creditable 15 fps total variation over a ten shot string. That’s all pretty handy, given this SMK’s modest RRP.

Impressive results from a fairly inexpensive springer, and combine those range card figures with the slick snap of the shot cycle, not to mention that snazzy stock, and we have ourselves a very appealing little sporter that’s hard to put down.

Thanks to Range & Country Shooting Supplies in Sleaford, Lincs., for the kind loan of the rifle.