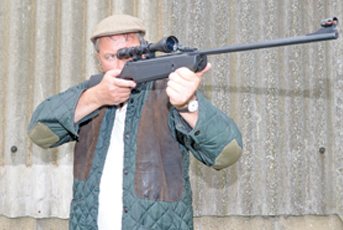 Getting started in the world of airguns can pose a problem, since the vast majority of what’s available is fairly weighty and unwieldy for youngsters. I was 13 yrs old when I received my first gun, and that Webley Vulcan, though a bit of a handful at the start, stood me in good stead for a couple of fun filled years.

Many young shots are lucky enough to start shooting even earlier these days, and the rifle on test here, from Sportsmarketing, is a great example of how modern materials can help the cause.

OK, the coded name, SYNXS is a bit soulless, but with one of the main criticisms out of the way, let’s get on and see just what this model has to offer.

It’s largely a case of what you see is what you get: a conventional spring/piston break barrel design, supplied with a composite synthetic stock. Open sights come as standard too, so it’s ready to go straight from the box!

Sounds good so far. Now bear in mind that my old Vulcan tipped the scales at 7lbs, and this SMK model weighs in at around 6.2lbs, and the plus points start to build. Synthetics are normally lighter than wood, so this conventionally styled sporter stock helps trim unnecessary mass, whilst still offering the features that aid good shooting. Fully ambidextrous configuration means a nicely defined cheek piece is on both sides of the stock. The raked pistol grip feels good in the aim, and the fact that a ventilated, soft rubber butt pad, complete with white line spacer, is also included, all adds to the ‘good feel’ factor.

Metal finish is a little dull and slightly rough, but par for this grade of rifle, yet that said, this SMK model is still good to handle and is pleasing to the eye.

As mentioned, the SYNXS comes complete with fully adjustable open sights, of the fibre optic variety - meaning small fluorescent elements are inset, to form the rear ‘notch’ and the fore-sight bead. The spring leaf rearsight comes with well marked finger wheels for windage and elevation, and the attractive fore-sight is even hooded for protection. The sight picture is very good, although as usual, many shooters won’t be able to resist the lure of glassware. When fitting a scope to this rifle, just bear in mind the relatively short scope rails, and the fact that any glassware has to be fitted without fouling the breech area, as the barrel has to be cocked to loas meaning that the open sight assembly swings upwards and could foul an over long scope.

So we like the conventional profile and feel of this gun. But what really impresses isn’t always obvious. Look closer, and attention to detail in crucial areas, is much in evidence.

Break barrels are great fun to use, due to their fast fire nature, but the snap open breech that lays at their heart, can often be their Achilles Heal. Wear over time can result in a slack breech, where play between the barrel and breech jaws results in a less than consistent resting position for the barrel. The kiss of death to accurate shot placement of course, so with this in mind, SMK actually provide a locking ‘keeper’ screw, which allows the user to gently tighten the main breech bolt, then lock the tightening screw itself. A nice touch indeed on this grade of gun.

It should be noted at this point that, despite some confusing descriptions elsewhere, this model isn’t ‘High Energy’, but produces mid to low power at best. That’s hardly a criticism, since the company has a raft of full power models from which you can choose if you want a higher power level. In fact, given the remit of ‘starter gun’for the SYNXS, the resultant ease of use that stems from having a lower kinetic output, shouldn’t be under estimated; for cocking this gun is easy. Effort required gets progressively easier through the downward stroke.

Trigger wise, the shape of the blade here, is spot on, with a nice broad surface, yet the final release, of the non-adjustable mechanism, whilst crisp, was just a little heavy.  Still better than my rather painful Webley of old though, with its absurdly narrow blade!

Minor niggle time, and that concerns the auto safety catch. With a small scope fixed in place, reaching round for the safety with the right hand thumb, (the normal approach) proved awkward. The design sees a small button which needs to be pressed inside its recess - not easily achieved from a conventional grip. I found myself nudging off the button with my left hand, before taking the shot. A weak bit of design, in an otherwise good rifle. These actions can be manually de-cocked incidentally.

For the best groups JSB made pellets are always a good place to start, suiting most guns as they do, so AA Diabolos (a typical JSB design) were next up, to give the SYNXS a fair test. Many cheaper pellet brands may well suffice for plinking, but I wanted to see just what this gun was capable of.

Over the 25yd test range, inch groups were the norm, but the interesting thing was that, more often than not, four shots were in a ragged cluster, with the fifth just pulled slightly. In short, this gun just felt inherently accurate. A slightly better trigger would help, yet all things considered, performance was satisfyingly good.

What really stood out with the test model was the total absence of vibration and reverberation, with very little recoil to speak of either. The shot cycle happens in one crisp action, and it makes for a very pleasant experience. All a great surprise in what has to be seen as a budget package.

It should be noted that power output is fairly low, with the test gun producing around 7.1ftlbs; with velocity just shy of the manufacturers claimed figures, so I personally wouldn’t recommend this model for hunting. Yet overall, I couldn’t help but be immensely impressed. At £79.95, the SYNXS has to be one of the best value youngsters’ starter guns or adult plinking rifles on the market today. A slick operator for sure! GM