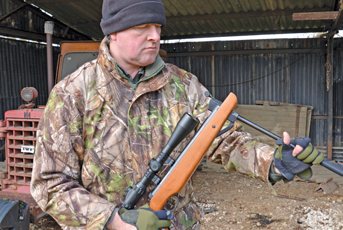 Sportsmarketing, or SMK as they are more commonly known, remain one of the largest suppliers of airguns to the UK market. Their extensive range of products are evidence of the company’s ‘something for everyone’ ethos, and it’s an impressive operation for sure.

On test here is one of the evergreen XS208’s, and bearing in mind the RRP of £139.95 for the model on test here, you certainly get a good list of features for your money.

SMK’s bread and butter business is of course traditional spring powered models, and the XS208 falls into that category. Whilst the 208 action is available in a variety pf guises, the XS version here comes with the standard sporter style stock. It’s a full length model and is particularly striking with its light coloured wood stain, and some pleasant grain on display. Open sights come as standard, and first impressions are of a well presented, slickly finished adult rifle.

Focussing on that woodwork, with no definition to the cheek piece, the visuals are a little bland.

The advantage of course means the stock is totally ambidextrous, and if those open sights are to be used, then the fairly low cheek piece comes into its own. The nicely tapered fore-end fully conceals the breech block too, which contributes greatly to the streamlined profile overall.

Of course this price bracket has to be regarded as starter rifle territory, so corners will be cut at the manufacturing stage. Having said that, with the overall quality of Chinese imports rising significantly of late, the standard of engineering is surprisingly good. Where they still lag behind though, is in the final blueing stage, and all the metalwork on display here is admittedly rather lack lustre.

Inspiration has clearly come from a well known German manufacturer, and the Foresight housing, safety catch and trigger, all follow the recognized profile. It’s a good one though, and the 208 has a purposeful, stylish look as a result. Coming with fully adjustable (finger wheel style) fibre optic open sights as standard is a great start, and these can be very satisfying to use. If you’re not familiar with fibre optics, the principle is that a strand of coloured but clear fluorescent plastic is used to gather as much available ambient light as possible.

This gives natural illumination to the end of the strand which appears as a small glowing coloured dot (one red at the front and two green on the back sight) which can make a big difference to open sights in poor lighting conditions. The moulded plastic foresight housing sets off the muzzle, but if you really insist on mounting a scope from the off, then removing the open sights is a simple matter of twiddling the single grub screw with an allen key.

SMK have made provision for fitting the scope too, with the addition of a small arrestor block, screwed to the receiver, just to the rear of the dovetail rails. This prevents the rear mount from moving backwards under the two-way whiplash effect of recoil, and it’s impressive attention to detail for sure. Offering an arrestor block as standard makes sense with any spring powered model. The rear mount just needs to be located so it sits up tight to the arrestor block, as it will prevent the scope or mounts from moving under the influence of mechanical firing cycle or recoil.

Cocking the action is a simple task, just requiring an initial jolt to free the barrel from its détente. Cocking effort is very reasonable, assisted of course by the full length barrel, and whilst some spring noise was present on the test model, the operation was a civilized experience overall. Pellets were a snug fit into the rifling where the .177 test gun was concerned, which is a good thing, but the breech jaws were a little slack, allowing the barrel a bit too much freedom of movement when the breech was broken. That said, final lock-up when the barrel was in the closed position, was reassuringly solid.

The safety catch on this model is automatically set once the action is cocked, and just needs nudging off before the shot is taken. Triggers are so often an area to suffer on budget rifles, and the 208’s is a fairly crude affair, being spongy and vague as the trigger sears creep over each other. But with a reasonable final release, it’s about par for the course. It still amazes me why more guns don’t feature flatter, wider blades, to help spread the load across the finger, but accessory trigger shoes are still available in some gunshops to accomplish just that.

At 7.3lbs, this a rifle that won’t tire you out too soon over an extended session, and with the full length barrel adding front weight where it matters, balance for me was just about right.

Over the chronograph, this XS208 posted what can only be described as text book figures. A ten shot string with a total spread of just 14fps using the ubiquitous JSB pellets (AA Diabolo Field for the record), and a 12fps spread using Webley Accupells, was an impressive start indeed. The barrel did prove pellet fussy however,  showing a dislike for the Accupells. Groups shot over 30yds with the Diabolos were better, with the best just shy of an inch, and the average around 1.25inches.

This is a rifle to cater for entry level shooters and enthusiasts who wish to keep their costs down. Performance is average, yet final accuracy may depend on barrel quality. In my experience, this grade of rifle can vary a little from one example to the next, and it’s maybe this aspect that needs to be born in mind. Overall though, the XS208 has to be seen as great value for money, and I for one couldn’t fail to be impressed by the price. It comes well appointed and presented, and as such, would make an ideal first gun, or for those on a budget. GM