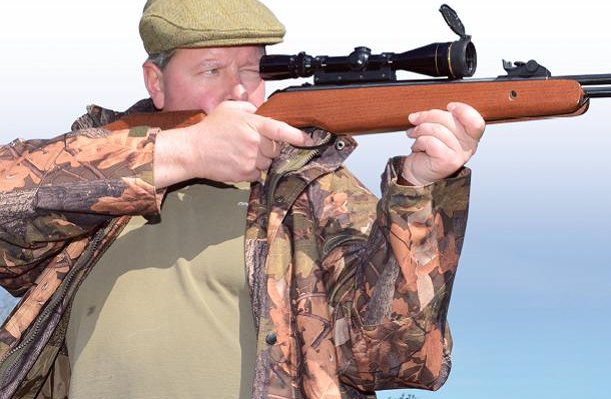 Under-lever airguns have been around for many years, but it was Weihrauch that re-energised the market, with their highly successful HW77 model, back in the mid-80s. A fixed barrel configuration has an advantage over conventional break barrel designs, since a separate lever is used to cock the action. By keeping the barrel fixed, wear over time is kept to a minimum.

Sportsmarketing have several under-lever options in their massive range of spring powered guns, and it’s the SMK XS38 Custom, that’s on test here. The 38 is a full-sized, full-powered sporter, which comes brimming with features, so I was keen to get started.

With Custom in the name, it’s fair to expect something a bit out of the ordinary, and the SMK XS38 doesn’t disappoint on this score. On opening the protective carton, I was particularly struck by just how big it is up close, with dimensions and weight that place it firmly in the ‘adult sporter’ category. Get over the sheer mass of the thing, and it’s surely rude not to appreciate the rather tasty woodwork. SMK use attractively grained beech, and with plenty of grain pattern showing through the thick, orangey brown lacquer, the overall look is very pleasing to the eye. An unusually long forend marks this rifle out, along with the curved cylinder end block, and with a better all-round standard of finish over standard models in the SMK line-up, there’s an air of quality, especially considering the modest asking price.

Modern thinking promotes ambidextrous stocks, which not only allow anybody to use them with ease, but also help to reduce production costs, as the number of options available to the customer are effectively limited. That said, the XS38 Custom’s stock actually comes with a right hand dedicated cheekpiece. In practise though, it’s so shallow as to be no hindrance to lefties whatsoever.

Fibre optic open sights come as standard with this model, and they really do offer a good sight picture. The rear-sight is fully adjustable via finger wheels for windage and elevation, while the moulded foresight assembly doubles as the under-lever clip. The usual coloured elements are utilised, and the impression of semi illumination in poor light is a very useful feature.

Standard of finish overall is well up to scratch in this price sector, and with the metalwork receiving an extra metal polishing process, before the chemical blueing is applied – the resultant deep gloss finish is aesthetically pleasing. Wood to metal fit is spot-on, and a fair standard of engineering prevails.

I can’t over emphasise the worth of shooting any airgun with just open sights to start, gaining a feel for the basics along the way, but a sporting rifle such as this eventually demands that some form of glassware be fitted. Sportsmarketing fit an arrestor plate to the top of the receiver, at the rear of the dovetail rails, which means that with the rear scope mount fixed right up against the arrestor, any scope creep should be eliminated.

To cock the XS38, first pull the front plastic cap of the underlever slightly back to release it, then pull the lever down until you hear the mechanism engage and set. A pellet can now be loaded directly into the exposed breech. Under-levers of this sort need internal safety systems built in, and SMK have taken a reassuring ‘belt and braces approach’. To this end, the breech cannot close until the lever release catch (shotgun in style at the rear of the action) is first pressed forwards. This disengages the internal antibear trap device, allowing the lever to be returned to the closed position. The automatic and re-settable safety catch can now be pulled back to its rear position, and the shot taken.

The trigger on the XS38 Custom is specified as single stage, and whilst it is fairly crude, if the blade is slowly pulled to take up much of the creep, the final release is at least lessened. This rifle is comfortable in the aim, with the lead hand sitting nicely at the tip of the forend. At 8.8lbs, weight is significant, with centre of balance towards the front, which may not suit everyone; mass does help absorb much of the recoil however. The action felt a little rough through the cocking stroke, and there’s plenty of spring resonance through the shot, but after spending plenty of time shooting the ‘38, I really warmed to it.

Over the chronograph, energy figures were incredibly consistent with a variety of pellet brands. SMK’s own Black BS55 Domed pellets returned a spread of 13fps and average energy of 11.7ft/lbs, whilst a spread of 10fps with RWS Superfield, and 11.9ft/ lbs was equally impressive.

Accuracy tests over 30yds saw the XS38 Custom print 1.25-inch c-t-c groups with pretty well anything I cared to select, which admittedly isn’t stunning, yet to be fair, well within the manufacturers claimed performance in their manual.

Take one look at the XS38 Custom, then pick it up and handle it, and it can’t fail to impress, as a full-sized general purpose sporter. Yes, there are many more options in this price bracket, and it may be too heavy and unwieldy for some, but if it does appeal, then you get an awful lot of gun for the money