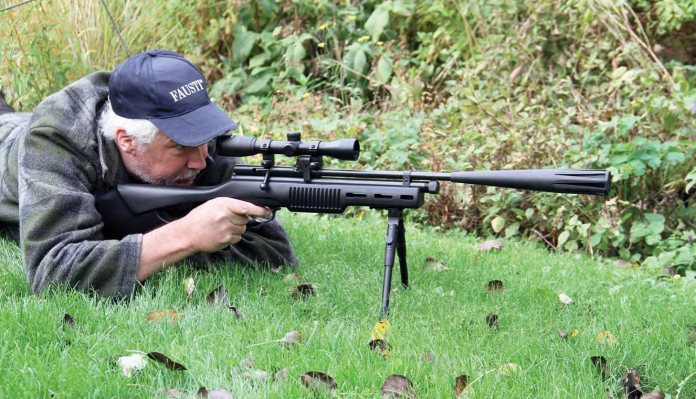 I have tested a few SMK rifles of late, including CO2, spring and pre-charged models and it always strikes me that SMK rifles always shoot better than their price point would indicate.

I am a died in the wool spring gun fan, as readers will know, but I do like the CO2 propulsion system, as it offers a flexible and an ‘instant power to hand’ sort of firing sequence, without all the faff of a full diver’s bottle. The problem is getting the power most people want for hunting was a bit of an issue, which is where the XS78 comes in. It uses a tandem, back-to-back CO2 capsule system, designed to give dependable power with good accuracy and enough shots to keep shooters happy.

The XS78 is definitely designed to appeal to younger shooters, with its ‘Tactical’ format but it comes with a bipod, scope and 8-round rotary magazine, all for £299.95. Let’s see how she performs.

There is no getting around it and so I will mention it first, who the ‘bleep’ thought that faux sound moderator or brake was a good idea! It’s part of the look I suppose, but forms no real useful purpose and is just too large for the overall gun. It is non-removeable, as it looks bonded to the barrel, but would look so much better with a small sound moderator. Right, that’s that sorted, now the rest is really good. It’s probably my age!

The barrel is 16-inches long with a 15mm diameter. It has a matte/satin blued finish and the calibre on test was .22, although .177 is available. In .22-calibre, with a CO2 capsule power source, you will have more shots per loading, as it is more efficient.

The action is your typical cylindrical bolt action form, with the bolt action housing on top of the valving and trigger unit. The bolt is 3.25-inches long and has a 1.5-inch handle with a slim but rounded knob, also blued, that is very easy to operate and has a nice positive action through its stage of opening, cocking and closure with 1.0-inch of travel.

What is interesting and a nice feature, is the ability to have your XS78 as a single shot, with direct pellet access to the loading tray, or multishot with the supplied 9-round rotary magazine. This mag is a repeater unit, which is actually really simple but incredibly reliable in use. It clamps to the front of the receiver, just ahead of breech; the synthetic jaws clamp around the receiver and a single Allen screw secures it. This two-part magazine then allows the rotary section to be slid right to separate the two halves and thus load the mag. Really simple and very easy, just rotate the thumb screw whilst placing a pellet into the loading tray, and as it is indexed to the next round, the previous loaded pellet is held snug within the magazine. Once loaded, it’s laid back in and each movement of the bolt back and forth loads the new pellet into the breech after rotating the thumbwheel. I have to say, it performed without a flaw, but remember to turn for each shot!

The trigger is simple, to be honest, but is fine for this class of rifle. It is a single stage unit that broke at 4lbs and had quite a long, single-stage before release but it was predictable in use. You can adjust it by taking off the stock, but leave it alone, it’s fine. There is a safety, which is a rotating lever to the front of the trigger guard, which I have never seen before that has to be quite forcibly moved rearward to disengage the trigger firing mechanism and as such disables the firing mechanism.

The stock and bipod are a really nice unit that have a characteristic thumbhole configuration and one that works very well. The forend is step with two levels; intentionally, as the first section has very deep serrated grooved to secure a hold in the offhand position and the front lower section is equipped with a Picatinny rail. To this, the supplied bipod can be attached. I thought: “another cheap bipod”, but blimey it’s really good! A single clamp attachment and then the length is altered by a large knurled securing ring. Loosening this allows the sprung leg to extend and so any height from 9- to 11.5-inches can be instantly obtained and secured by re-tightening the securing ring again. It’s simple but just what you want, as it is fast and very easy to use, I like it.

The thumbhole section is very open, which is good for ergonomics but not looks but that does not matter. This stock is very user-friendly with no left or right-handed bias, which helps both shooter types, as quite often after rats in barns you need an alternative hold to get the shot.

The actual pistol grip has a moulded chequered panel with a standard comb height but has a cheek piece to both sides, befitting a rifle of ambidextrous abilities. Finally, there is a ventilated black rubber recoil pad with a length of pull of 14-inches.

SMK supply a 4x32 scope with the package, along with two piece mounts, and considering the cost of the complete outfit, finishes off the SMK XS78 very well.

A CO2 air gun is like others, the propulsion of the pellet towards the target is initiated by the power source of the CO2 gas load. To load up, you have two capsules that are loaded back to back i.e. opposite ends to each other. This system allows a twin power source to be combined by entering the two CO2 capsules into the air reservoir beneath the barrel loading hatch. You then tighten the cap to break the CO2 capsules’ seal and then backing off a tad to fill the air reservoir from which a measured amount of propellant CO2 gas is used to direct a pellet towards the target.

With two CO2 capsules, you have an average power on tap and in .22-cal that equates to 52 shots per two CO2 capsules on test, with further, reduced velocity shots before the capsules were entirely empty.

This obviously will differ per temperature change and pellet weight but it’s a good average load from which you can assess the pellet that best suits you.

Firstly, the muzzle appendage is not right, but other than that the XS78 really shoots like a pre-charged rifle but with only the addition of extra capsules, rather than a complete air tank system. Accuracy was actually as expected, good with all the pellets, with the FTTs being a real performer and enough power for short range hunting.

SMK aim at the entrylevel shooter but actually sell themselves short, as their rifles are good value for money and always shoot well, whether you like the look or not.