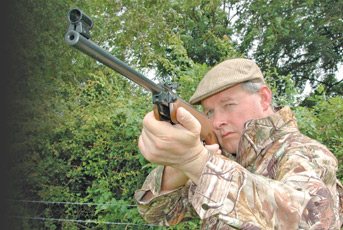 General purpose spring powered airguns are the area where the Colchester based company, Sportsmarketing, really specialize; and they now command an enviable share of this market sector. It’s a logical way to go too when you think about it, since the budget end of the market is as popular as ever; especially in the current economic climate.

Sportsmarketing, or SMK as they are probably better known, have an amazing array of models from which to choose, but the model on test here is the SMK20, which serves as a perfect illustration of the company’s successful formula for
customer satisfaction. Many shooters just want no-nonsense, straight forward spring power, at a price that’s right, and that remit just about sums up this popular rifle.

The SMK Model 20 comes complete with open sights, and is a light weight, yet full powered break barrel. In addition, it comes with an attractive hardwood sporter style stock, and a two-stage trigger.

If the profile looks familiar, that’s hardly surprising, since this gun follows closely the external pattern of a few famous classics from a certain German brand. ‘Nuff said, but leaving that obvious observation aside, the end result is undoubtedly attractive, and first impressions of the SMK20 are extremely positive. This grade of rifle can often be wanting where the final finish is concerned, yet all credit to SMK, for the well polished and nicely blued metalwork on show here. OK, the chemical blueing looked just a little thin in places, but overall, this is well above average for this price sector.

An automatic cross bar safety catch is fitted which sits just to the right side of the rear of the cylinder. Whilst I’m no fan of these auto designs, it is at least easily nudged off with the thumb, meaning inconvenience is kept to a minimum.

Bearing in mind that this gun may well act as a ‘first rifle’ for many, the fact that open sights are included as standard is a real bonus. SMK mix and match here, with the fore-sight a traditional ‘iron sight’ post, and the rear sight, formed from green fibre optic elements. Overall though, the sight picture is crisp and clear, and as I’ve said before, for training beginners in the art of marksmanship, these sights will do just fine, earning many fans in the process.

The natural progression these days is to fit glassware of course, and in that regard, this model comes perfectly well appointed. Extensive dovetail rails (seven inches long) are cut into the cylinder, which also include no fewer than three arrestor stud holes, so all bases should be covered. Most spring powered airguns will inevitably suffer from scope creep, as the recoil generated from the guns piston- action is partially transferred to the scope and mounts. The remedy is to either fit a one piece mount, which with the designs longer area of grip, should nail the problem then and there, or alternatively, to use an arrestor block, positioned on the rails, just behind one
of the mounts. Many mounts themselves now come fitted with arrestor studs, which can be wound out so that they locate with the arrestor holes in the gun’s cylinder - and in short, the SMK20 basically allows for all of these eventualities and more.

Overall the SMK20’s woodwork handles pretty well. Technically, it’s a right handed stock, with defined cheek piece et al, yet in practise, the bias is so mildly configured, that the end result is all but ambidextrous. That’s probably a good thing for a beginners or general purpose model in any case, and whilst ‘bland and conservative styling may seem an apt description, it’s perhaps those very qualities that give this rifle such wide appeal. Overly technical, target style weaponry can simply be off putting to many, and that’s where the timeless traditional look of the SMK20 can pay dividends.

We’ve established that visually, this gun is highly appealing, but how does it shoot?

Firstly, just cocking the action is an enjoyable and easily manageable task, given the moderate cocking effort required. Secondly, the pseudo 2-stage trigger, whilst still fairly creepy, manages to release the shot after predictable movement, and modest pull weight.

Chronograph check first, and using Milbro Select ammo, some highly creditable figures began to take shape. A ten shot string varying by just 10fps proved that consistency wasn’t hard to come by, although, sadly, the barrel just refused to group with them. Making a tactical switch to the ubiquitous Air Arms Diabolo Field (JSB) brand, returned an equally impressive 12fps variation, for an average kinetic energy reading of 11.8ft/lbs which really is quite remarkable consistency; especially given this rifle’s price bracket.

Accuracy wise, over 30 yards, the best groups recorded were 1.25inches, which isn’t bad for this grade of rifle, and par for the course with open sights.

In a crowded sector of the market, spring powered break barrels are jostling for supremacy, yet sales figures suggest that Sportsmarketing are appealing to many, where value for money, budget beaters are concerned.

This rifle offers the enthusiast an impressive array of features, in a highly shootable format, and these factors come together to present the shooter with a user friendly, full powered rifle, at a price to suit; ideal as a starter pack, or for close range vermin control. Indeed, to coin a cliché, you could say the SMK20 does what it says on the tin, and on that basis, it certainly deserves a closer look.