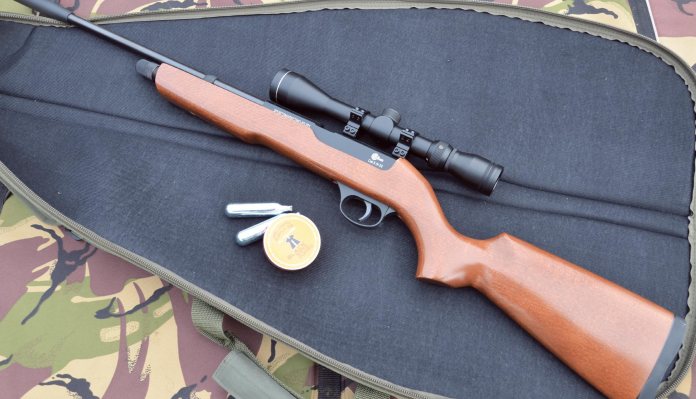 CO2 power has a large following in the UK, and there are benefits over conventional air systems. A big part of the attraction comes with the fact that the power itself is contained within the CO2 bulbs, so designers have more flexibility. Where a conventional spring piston model needs a relatively heavy mainspring and piston inside, to generate power, no such cumbersome guts are required for CO2, and the result is often lighter, more manageable products; easily handled by all.

First things first though, and at this stage it makes sense to labour a general point regarding this specific power source. CO2 is directly affected by temperature. The colder the conditions, then the lower the likely power output. Likewise, cold temperature equals fewer shots per CO2 bulb. Accept that fact, and the medium has much to offer.

When a call came in from Sportsmarketing that a new CO2 model was hitting the market, I was intrigued. Having now had a few weeks to play with the XS501, as it’s called, I can report that I rather like it! First impressions are very favourable indeed, and picking up this new model reveals a modestly weighted, wellbalanced rifle, that holds much appeal. Looks are of a small calibre hunting rifle, with that fully extended forend, and side bolt action, and the visuals get everything off to a great start. Specification includes a beech sporter stock, single shot recoilless action, automatic safety catch, fibre optic open sights, two-stage trigger, and a 22 inch rifled barrel.

As mentioned, the looks are very compact hunter and the beech sporter stock is both well-shaped and handsomely finished. Attractive grain pattern shows through the clear lacquer, and whilst the butt is rather straight line plain, it suits the streamlined feel of this rifle.

A full-length, slightly beefed up forend and comfortable pistol grip all add to the overall package, whilst that overly hard pad is basic but functional. As for the action, the large 22 inch barrel comes chemically blued to a reasonable standard. The breech block gets treated to a matt black finish, which contrasts well with the plastic trigger guard. The trigger blade itself is metal however.

Sportsmarketing (SMK) had sent this model through with one of their own branded 3-9x40 AO scopes, which meant they had removed the fibre optic rear sight from its rails, and failed to include it for inspection. Having seen the fore-sight assembly mind you, other than the fact that it’s curiously marked ‘XT501’, I’ve no reason to believe that the fully adjustable fibre optic rear sight won’t be perfectly up to the job.

With sights sorted, I just needed to get some power on board. This comes courtesy of two 12g CO2 bulbs, and the process is a little fiddly. Firstly, that front valve cap needs to be unscrewed, to allow for the CO2 bulbs to be inserted into the main expansion chamber, and this whole area deserves a little explanationsomething sadly remiss from the rather incomplete, curiously worded instructions!

That front cap needs to be carefully unscrewed ideally via the ribbed metal ring, which is the wider section of the assembly. It’s important to use this, since the front plastic section actually has a reverse thread. If you can unscrew the plastic section, then make sure that the plastic ‘screw bolt’ underneath is backed off to allow for the valving to work correctly. I managed to get the plastic cap off and check this, but it then locked on solidly, so removal was difficult. If all functions correctly, then this shouldn’t be necessary in any case.

With the valve cap assembly removed, two 12g CO2 bulbs need to be dropped into the expansion chamber, as per the photo; the first one thin neck first, then the follow up bulb rounded bottom first. The two bulbs should then be lying back to back, so that closing the front cap forces each end to be pierced, releasing the CO2 into the chamber.

It’s important to note that when pushing that front cap assembly into place the thick ‘o’-ring needs to be firmly and quickly pushed into the neck of the chamber, then the threaded metal cap pushed down and screwed into place. The whole operation needs to be completed smoothly and quickly so as to achieve an efficient seal, containing the CO2 as it rapidly turns to a gas form. What should be simple is a bit fiddly and a dummy run with no CO2 loaded is a good idea, to get familiar. Prepare for frozen fingers if the seal isn’t good!

With power in place, pull that chunky bolt up and to the rear, until the hammer and trigger are heard to engage. Then roll a pellet into the loading channel, and push the bolt forwards and down to lock in position. You’re now ready to go.

The loading channel is rather cramped it has to be said, but adopt a ‘roll across from the right-hand side’ routine, and it soon becomes second nature. An automatic safety catch sits to the right hand side, and slightly high of the trigger, but its positioning makes it very easy to pull rearwards, effectively disengaging the mechanism just before a shot is taken.

Shot count with the XS501 is specified by the manufacturers as between 50- 60, when the rifle is used between 16-27 degrees C. As already mentioned, fluctuating temperatures affect CO2 as a power source, but obviously as the on-board CO2 slowly gets used up, velocity and power will drop. For a rough guide, my tests clocked energy of 9.9ft/lbs for the first 38 shots, dropping to 7ft/lbs over 50 shots. Velocity towards the end dropped by approximately 20fps each shot, but best practise would see a thorough test of a particular rifle at the start, and then work with the figures achieved – if you know you normally get 30 shots that are consistent, then stick to that number before looking to gas up. As velocity is heard to drop near the end of the charge, just cock the hammer and keep firing the mechanism until all residual gas is expended.

Velocity on test using Sportsmarketing’s own Black BS55 Domed pellets in .22 calibre showed a very acceptable total spread of 31fps over the first 38 shots. As for accuracy, I was really impressed. From a rest, I managed ¾ inch groups over 25 yards with the Black Domes, against 7/8 inch with JSBs. This all compared favourably with the manufacturer’s claim of 30mm, although over what range, those pesky instructions failed to mention!

Handling and performance overall was immensely satisfying, enhanced undoubtedly by quite the sweetest trigger for this grade of gun – wellshaped, slightly creepy, but fairly predictable nonetheless.

I really liked the XS501, and with its modest weight and easy handling fun shooting beckons for all – for a bargain asking price at that!

It just feels right in the hand, and with a pleasant bolt action, and very civilised trigger for this type of rifle, some highly creditable results are fairly easy to come by. SMK need to refine or upgrade the cylinder end cap assembly, and some half decent instructions wouldn’t go amiss, but otherwise, I can’t fail to recommend one of the nicest CO2 newcomers in a long while.