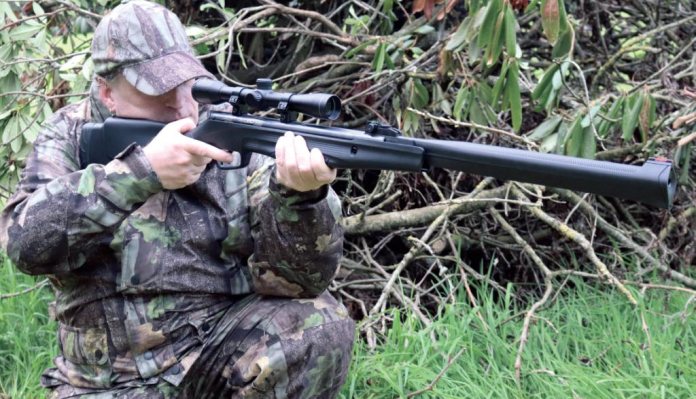 It’d be true to say that the cosmetic appearance of any rifle is what initially draws a person’s attention to it. So, in that respect it’s a certainty that the Stoeger RX20 S3 with get eye-balled when seen on racks at any gunshop. However. There’s no point looking the part if you can’t perform to the standard required, so looking beyond the high-tech looking modernistic styling and almost futuristic barrel shroud/ silencer, I’ll begin at a point and position that should be our first concern: the stock.

The ambidextrous synthetic handle features a relatively low yet defined cheekpiece with a thick full black rubber buttpad. The slim and narrow neck has a shallow rake while the pistol grip drops gently down with a slight palm swell. It’s immediately noticeable on handling that the grip is set quite a way back from the trigger blade, however its shape and curvature allow you to hold it in a way that will suit both younger and adult size hands – a noteworthy feature in itself.

The forend features an outward curved belly that also fills out at the middle section before it progressively tapers upwards and inwards towards the tip.

To aid grip, the stock features what the company term as ‘ProAdaptive Chequering’, a technical result of their ‘Human Tech Design’ philosophy. It carries the claim to be ‘the most versatile, efficient and progressive chequering developed so far and one of a kind’. That’s as may be but in plain speak the rifle is best described as using a combination of moulded rounded off oval shape stippling on the upper sections at both the grip and along the forend but also has removable grip insert plates on the lower sections at both areas. The standard black inserts as the rifle is displayed with have a very well-defined chequered outer finish – notice I refer to the colour as with the rifle you get two sets of replacement coloured inserts (orange and blue), these have an embossed finish.

They not only allow you to customise the rifle to suit your favoured cosmetic look, but also the feel you prefer due to the coloured plates having a very fine textured outer rather than the more standard chequering that adorns the black ones. This combines to make up what is termed ‘Multi-Grip System Technology’ which is designed to suit the shooter, preference and the environment the rifle is being used in. A single recessed Allen screw holds each insert in place and it only takes a matter of minutes to change all four to the colour and/or finish you prefer.

The rifle has a set of Hi-Viz fibre optic enhanced open sights comprising of an interchangeable raised red or orange fibre optic bar at the front and a fully adjustable metal rearsight with green fibre optic bars flanking the square shape sight notch.

The rifle also of course also has a set of well-cut dovetails and comes supplied in combo format with a Stoeger 4x 32 scope in a pair of two-piece mounts which for the price is an adequate sighting option.

Stand out from the crowd

Although a standard break barrel action springer, it’s at the forward section where the rifle really stands out from the crowd. On closer inspection the full top section of the shroud is also covered by shallow stippling which not only looks cool but effectively aids grip on the barrel for cocking.

The breech breaks quite easily, the cocking stroke is smooth and lock up when fully open is very solid. Also, when it reaches the end of its travel, the auto-safety mech pops out rearward. After thumbing a pellet directly into the barrel, the shroud and barrel assembly can then be swung back into the original closed position where it locks up securely with a reassuring clunk.

The 2-stage adjustable trigger has an ABS blade and, as mentioned previously, is fitted with an auto safety. This is ideally positioned for thumbing in without removing your hold at the grip. If you hold off taking a shot it can be re-set at any time by simply gripping either side with the thumb and forefinger and pulling it back fully rearwards.

Now we come to the full-length barrel shroud classed as the S3 Suppressor. The shape of the shroud isn’t just for cosmetic appearance because the integral lower section that tapers down from and runs the full length of the more rounded upper is a decompression chamber. So, while the upper section of the shroud uses internal baffles to reduce sound, air is also used upon firing, directed down into the lower chamber. Here it’s contained and slowed down, therefore exiting the gun after the main air with less speed thus further reducing muzzle report.

During zeroing, the S3 immediately showed its effectiveness as the sound on firing is significantly reduced compared to a standard comparably priced unsilenced springer. Recoil is also low which certainly aids accuracy and the .22 calibre test rifle soon showed it was capable of making ¾-inch groups at the set 25-yard zero. Incidentally, before scoping up I put the open sights to good use on my back-garden range where they proved highly useful out to 12-yards or so.

My first time with a Stoegerbranded rifle has proved to be a pleasant trip and it’s obvious that the lightweight RX20 S3 handles and balances extremely well for such a full-length gun. It feels good in the hold due to the very well-designed ergonomic stock while the suppression unit is a very effective one that helps elevate the rifle to a level well above its incredibly reasonable price tag.

Quite frankly for the price you’d be hard pushed to find any company offering a deal that gives you as much by way of performance plus the rifle has two sighting options – as many know I like open sights on springers and when of such quality they’re a definite bonus.

For newcomers and young guns, the RX20 S3 is a very nice choice as it’ll be a pleasure to use on the plinking range and can cope with many general walkabout hunting situations.