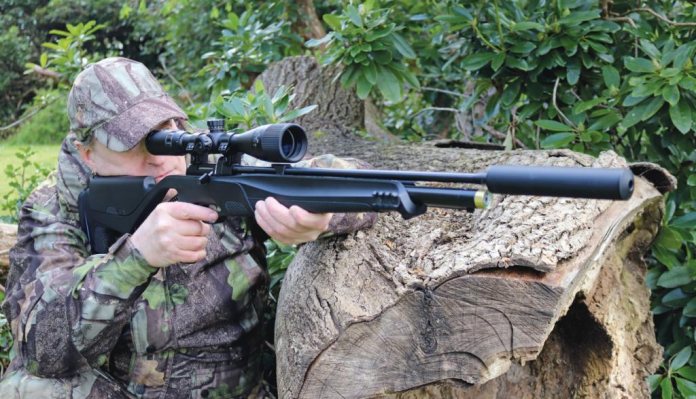 When Stoeger (a brand that is part of the Italian Beretta group) first came onto the airgun scene they did so with a small selection of spring-powered air rifles. They soon began a development programme which brought us a family of springers with a very efficient sound suppression system. These rifles were well priced, good quality and very practical.

It was then becoming obvious that sooner or later they’d enter the precharged arena and sure enough they have.

Step forward the Stoeger XM1 PCP. The name does sound like a bit of kit from Thunderbirds but it’s a very well thought out move forward by the brand. Before going any further, I must mention that globally the XM1 is a series of rifles and at present, in the UK we have the one option featured here.

The rifle comes bundled with a Stoeger branded 3-9x40 AO scope, 2-piece mounts, two magazines, a single-shot loading tray, two Picatinny rails, a sound moderator and a filling probe. There’s also a few other extras that I initially found a tad strange; an alternative blue colour pistol grip insert and an alternative height cheekpiece. These need full explanation so let’s now look at the stock, which will explain how the latter extras ‘fit into’ the XM1 equation. Incidentally, there’s a bipod available as an optional extra, which comes as two separate legs.

Straight out of the box the XM1 shows a low to medium height cheekpiece, black rubber butt pad with removable spacers and an overlarge thumbhole sits behind a steep drop-down pistol grip. It’s here the ambidextrous ergonomic stock can be altered to suit your requirements and personal preference. The stock comes with an extra high ‘Monte Carlo’ cheekpiece cowl. This actually replaces the low/medium height or ‘base cheekpiece’ that’s ready fitted. They’re easily exchanged as both are held in place by two, small, recessed grub screws set on either side of the butt. The Monte Carlo cheekpiece is required for use with a scope, I mention this as in some territories an open sighted version of the rifle is available, so I presume the base cheekpiece is for use when you prefer ‘opens.’

Now the pistol grip is also interchangeable for a slightly fuller black cover. I say cover as the pistol grip cover (blue or black) is held in place by a single recessed grub screw and slips easily on/ off and secures in place with the aforementioned screw located in the base of the grip. The difference in palm swell is negligible, so if blue’s the colour you prefer then in use, I’ll doubt most shooters will feel any noticeable difference by way of user interface and how much the grips alter your ability to control the trigger. They also have a term for this as it’s known as the ‘Multi Grip System’ (MGS).

Overall the XM1 has a slim stock, and this is most noticeable at the forend. The fore section is relatively lengthy in proportion to the metalwork and is quite straight with a slight taper towards the tip. There’s a run of fluting along the top edge and the underside the rifle has chequering. Incidentally, the same style of chequering is applied to both choices of pistol grip cover. This is termed as ‘ProAdaptive Chequering’, and despite the techno-jargon, the chequering is actually well configured and gives a very secure hold.

At the tip of the forend you have the option to fit the Picatinny rails supplied with the combo. Both attach to the synthetic moulding with two recessed hex head screws. Interestingly, they’re not of the same length or in fact design. The piece designed to fit on the right is a small run of standard Pic rail, while the one on the left is extended to serve as a magazine rack. This can hold three spare magazines and also uses magnets to hold them securely in place. For those who like to use a sling, rather than have standard metal sling swivel studs, the rifle has attachment holes at the very rear and front of the stock, which are integrated into the moulding.

There is a forwardfacing, colour highlighted manometer (air gauge) to help you keep a check of your air reserves, and the rifle is charged via a fill probe inserted into the fill hole located on the underside of the air reservoir. This in turn needs attaching to the fostertype coupling (supplied) before being attached to an air supply. From a recommended 200bar fill, I found the .177 test rifle’s regulated internals returned approximately 40+ full power shots, while the .22 is rated at approximately 60+.

The XM1 has a quite unique bolt handle and while the operation is straightforward, the design is quite radical and works a treat. Rather than a ball ended configuration, the rifle has an angled paddle shape handle or ‘Ergonomic Bolt Handle’ (EBL). Not only is the shape unconventional but it also has raised grip aids. Some will like this feature as it really does give a secure hold for cocking, although, admittedly, a standard ball ended design would have sufficed.

To cock, you simply lift up the bolt and pull fully rearward, where it locks very positively in place. Now you can remove/insert a magazine or indeed install the single-shot loading tray. A noteworthy feature of both magazine and tray is that they secure in place by a magnet, similar to the design that Daystate use. Once removed, the 9-shot magazine’s (7-shot in .22) perspex cover plate needs to be rotated anti-clockwise against spring tension, then reversed so the back is facing you. Once this is done, you can place the first pellet into the exposed chamber skirt first and this locks the cover plate in place. Next, carefully turn the magazine back around so the cover plate is again facing you, then drop a pellet into each chamber as they appear. Finally, turn the cover back to return it to its original position. When all are filled, you simply slide the magazine back into the lefthand side of the action, push the cocking bolt forward and turn it down to its original position. A very positive system that throughout the test worked faultlessly. For thoroughness, I also used the tray, which fits exactly into the housing and is capable of guiding any shape of pellet directly into the tube.

The optic is surprisingly good quality. It has uncovered finger adjust turrets that work very positively and it features a standard duplex reticle. The AO ring and zoom work very smoothly.

The rifle came with the next piece of praiseworthy kit already fitted; the silencer/moderator. This was a revelation as I wasn’t expecting it to be as efficient as it was, and by today’s standards to be able to say this is a silencer that can stand alongside the best of them. It’s also worth mentioning that its compact size suits the rifle perfectly and it sensibly has a hunter friendly, nonglare, matte black anodised aluminium finish.

The XM1 has another tasty feature up its sleeve in the form of its trigger mechanism. It isn’t just a standard 2-stage adjustable as you can alter the trigger position within the guard forwards or backwards to suit your preference. This is achieved by loosening a small grub screw at the top, then sliding the trigger along the bar above. When it’s in the position that suits, simply re-tighten the grub screw. The metal blade is nicely curved for finger feel and trips the sears very cleanly. The mechanism also uses a large cross-bolt type safety positioned at the front of the unit. Push it in from the left for SAFE and from the right for FIRE.

As for accuracy, yet again the rifle didn’t disappoint, showing pellet size clusters out to 30 yards using quality ammo. So, it’s a rifle I’d have no qualms using for hunting.

Considering this is Stoeger’s first step into the PCP arena, the XM1 is a highly proficient performer. It’s very accurate, lightweight, handles well, plus it comes with a good quality scope and a very effective sound moderator. However, when compared to most PCPs on the market, it does have a low shot count, but for those new to the precharged scene, it’s an ideal starter rifle for shooters of all ages.

Thanks to T & J. J
McAvoy LTD for supplying the rifle on test.