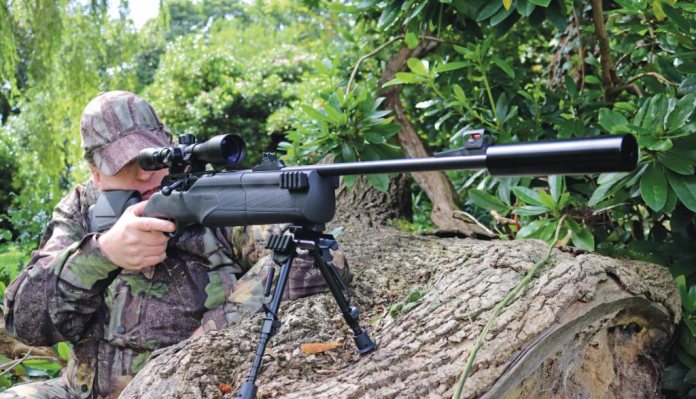 I’m sure many will remember the Umarex Air Magnum as it was one of the first massproduced CO2 powered air rifles to be capable of producing nearly 12 ft/lbs of power. In more recent times, it seemingly ‘went out of fashion’, however, thanks to John Rothery’s, it’s back in full combo format.

Although the latest version of this rifle has a re-designed stock, it stays true to its roots by being of a black ambidextrous synthetic build. This part of the rifle has received much attention and makes up for a large part of its upgraded status.

The stylish ergonomic stock features a medium height cheekpiece with steep drop-down pistol grip and a thick ventilated black rubber butt pad. Now, I’ll stop here because as the rifle has open sights, Umarex has come up with a neat addition for use when required. For want of a better term, it’s a removable, friction fit cheekpiece cowl that simply slips over the top of the rifle’s true cheekpiece to raise it to a more suitable height for scope use.

The forend - like the gun itself - is rather lengthy and shows three short runs of Weaver/Picatinny style rail. One is positioned underneath and two either side at the very front of the fore section. These are for attaching accessories and of course, the rail underneath is for the tactical bipod.

To aid grip on the otherwise smooth stock, both the pistol grip and forend have a generous amount of multi-oblong indent patterned panels. These really do help the shooter attain a firm and secure hold, so it’s good to see these unobtrusive, yet practical grip aids have been integrated into the moulding.

Inside the forend, there is a removable and renewable 88-gram ‘tank’ of CO2, or as it is better known, the ‘Air Source canister’.

To access the inlet valve housing the front section of the stock’s forend has to be removed. This is achieved by using the release catch found underneath the stock at the point the two-piece forend meets, where you’ll find a slotted push in catch. The ridged slots allow a firm thumb hold as you press inwards and push or pull forward, whereupon the front section releases to facilitate its removal from the rifle. Don’t be under the misconception this could in any way be a weak spot due to it being hollow, as the stock at this position is thick-walled plus the securing catch is very strong.

Now back to the installation of the power source. When the forend separates it reveals a cavity where the 88-gram Air Source tank screws into. When in place, it’s already half-covered from being seen from outside the rifle and then when the front section is pushed back into its original position it’s held very securely by the clip-type catch.

Once you’ve screwed the canister into position you should dry fire the rifle in a safe direction as you would with a low power CO2 pistol. This ensures the canister is fully pierced and the gas is correctly feeding through the inlet valve as well as all the rifle’s internals.

A full canister is capable of easily giving 200+ shots and using the Umarex Mosquito .177 calibre 7.40-grain pellets supplied, the test rifle averaged a power output of 11 ft/lbs. Incidentally, if you want to use 12-gram CO2 capsules, then you can fit an adaptor from Walther.

Those familiar with the Walther Rotex RM8 series of rifles will be glad to know the 850 M2 uses the same action and trigger unit layout. To remove the 8-shot alloy magazine for loading, the generously-sized ball ended cocking bolt needs to be lifted from its original position and pulled back until it locks fully rearward. Then to remove the magazine from its housing you need to slide back the slim, outer edged release catch positioned directly behind the housing on the right. Then you can lift the drum shape magazine out from the left-hand side of the action.

To fill the mag, you just place a pellet into all the empty chambers with the centre boss facing you, ensuring all pellet skirts fit flush or below the mags rear face. Once filled, slot the mag back into its housing and then push the cocking bolt forward and return it down to its original position. No need to manually close the catch, as returning the bolt to its original position takes the retaining catch forward with it. In effect, this provides a foolproof magazine security system.

The 2-stage trigger unit (adjustable for length of travel only) is equipped with an auto-safety positioned at the rear of the action. This engages (pops-out) every time the action is cocked. Also, it uses what is known as a ‘double safety system’. This requires the slim vertical slide catch positioned on the safety’s outer edge (facing you) to be pushed down and inwards before you can push the main body of the safety in. Once you get used to this particular nuance of operation it doesn’t overly slow the procedure, rather ensures when primed, unless manually overridden, the rifle is always on safe.

To visually display status, when the safety is pushed in fully, a red dot can clearly be seen on top of the action’s rear base plate indicating it’s now ready to fire. Also, should you decide holding off on taking a shot, it can be manually re-set at any time by simply pulling it back using your thumb and forefinger.

The rifle has a basic pair of fibre optic open sights, those being a hooded red fibre optic foresight blade at the front, whilst the rear sight utilises two green fibre optic bars set either side of a square shape aiming notch. Although sight adjustment is quite basic, the opens are still capable of kill-zone accuracy out to 12 yards.

The rifle also has a lengthy uninterrupted scope rail for fitting optics and this is when the gun really begins to shine. I’d zeroed the included Walther scope at 25 yards and was soon making sub 0.5” c-t-c groups while shooting off the pod. In skilled hands, the rifle is still capable of kill-zone accuracy out to 30 yards. However, if using this for pest control let’s remember this is a CO2 powered rifle and because of power fluctuations due to temperature and even weather conditions, I urge users to keep ranges within 25 yards and regularly check the power output and the chosen set zero range.

The trigger is quite predictable in feel so can cleanly send lead on its way with no undesirable creep. The sound moderator included in the package is the Umarex Neo K3, and as I’ve mentioned in past tests where I’ve used this 3-baffle mod, it’s superb at quelling muzzle report and once again proves its worth here.

As for the tactical bipod, this largely earns its name due to it having Weaver/ Picatinny rails on the outer sides of either leg. I’ve never really found a use for this configuration and as the rifle has similar side rails on the forend it does seem to be a bit over the top. However, it’s good quality and you’ll not run out of accessory attachment points if this type of set up appeals.

As I alluded to at the beginning of this piece, CO2 air rifles capable of creating a power output close or up to the 12 ft/lb legal limit are now very thin on the ground. This could be due in part to changing trends, plus there are now a lot more pocket-friendly single-shot and multi-shot PCP’s on the market than ever before.

However, the 850 M2 is a fine and timely reminder that there’s a very viable, cost-effective alternative for those looking for a multi-shot CO2 powered air rifle that suits generalpurpose pest control duties. Say for instance if ratting or feral pigeon culling in inhospitable, grim, and dirty conditions then it’s certainly up to the job and tough enough to take the knocks and scrapes.

It’s accurate, light and handles nicely on or off the pod, plus has a high shot count. For fans of CO2 then I’d say it’s a must for those precision plinking sessions that test stamina and the quality of your kit.