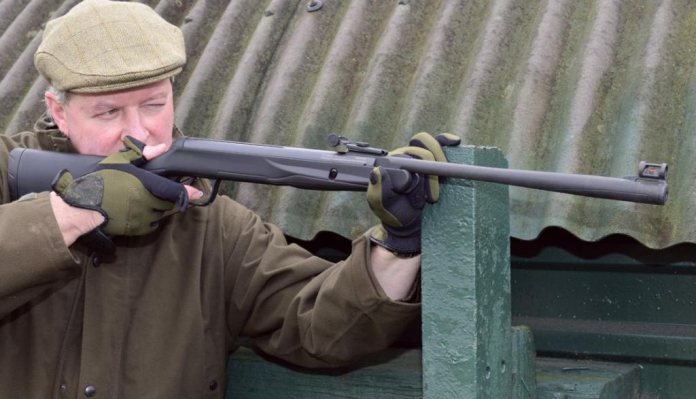 Just as I was beginning to ponder the importance of getting youngsters involved in our sport, there seems to have been a rush of new models of late- all aimed at the little people among us. It’s a two-way thing of course; as we need the next generation of shooters to come on board, and manufacturers need the next wave of customers for their products. Vested interests aside, it’s a heartening sight, and one such new model, specifically aimed at the junior shot, is on test here- the Browning M-Blade.

Umarex, based in Germany, are the huge concern behind a plethora of airgun products that find their way into the UK market, and much of their output is manufactured using famous brand names, under license. The Browning M-Blade is one such venture, and first impressions are highly favourable. So, let’s get a closer look, and see what it has to offer.

Anyone who has tried to help youngsters take part in the shooting sports, will appreciate that the problem is scale. Little ‘uns between the ages of 9- and 12-years old for example, being underdeveloped, just don’t have the strength in their arms to support a full-sized rifle in the aim; yet we often persevere. “You’ll grow into it”, is the usual cry, but some youngsters are inevitably put off from that initial encounter. Guns such as the Browning M-Blade can therefore make a big difference.

It’s a break barrel design, and at its heart is a traditional spring piston power plant. But here, the manufacturers have correctly identified the fact that juniors just don’t need full power to enjoy their sport. So, the M-Blade is deliberately low powered, which has added benefits, as we’ll see. A rather snazzy, scaleddown synthetic stock is part of the deal, along with fibre optic open sights, 2-stage trigger, and a fully shrouded barrel.

Umarex have a reputation for good engineering, and that seems to spread through the product range. The M-Blade’s barrel and breech block are coated in some plastic compound, and this is very well done. It effectively becomes a shroud, with the synthetic coating running the entire length of the barrel. It gets much wider towards the muzzle end, but look closely, and the lip of the rifling is visible at the muzzle, so it is largely cosmetic, and doesn’t act as a silencer in any way. That obviously matters not one jot; for what it does do, is act as a very comfortable cocking aid, and the matt textured feel, adds grip as well as great protection to the metalwork underneath.

The stock is a single-piece moulding, which incorporates an integral trigger guard in the design, and I reckon Umarex have come pretty close to nailing those proportions. The sleek, thinned down fore-end looks great, with that stylish swell, whilst the drop-down style grip looks and feels the part too. I would say it has the right amount of density, without feeling too hollow and cheap- a common complaint with this type of stock. As for the metalwork on show, that comes down to the main compression cylinderand since this sports quality chemical bluing, the overall impression is that the M-Blade is well made and built to last.

I always reckon that dedicated junior rifles should come fitted with open sights as standard, as this allows beginners to get to grips with the basic elements of sighting and shooting. Start with the basics, learn the key elements of correct hold and consistency, and hopefully a lifetime of enjoyable shooting will follow. This Browning comes with Fibre Optic style sights, and they take the form of a fully adjustable finger wheel controlled rear sight, using green fibre elements, and a hooded foresight, with a plastic hood containing a red fore-sight element. The result is a great sight picture, that works well in fading light. As mentioned, I’d always start with the open sights, but the M-Blade has all bases covered, coming, as it does, with a generous stretch of dovetail scope rail machined into the top of the receiver.

This is of course a traditional springer, and to cock the action, we first need to break the barrel. I found a small jolt under the breech was necessary, but from thereafter, the actual cocking effort required is fairly slight, partly helped by a short stroke. Umarex have deliberately designed the M-Blade to operate at sub 6ft/lbs energy levels, and this means that less spring needs to be compressed, so the effort is minimised. But it should also mean that there’s less kick, recoil and noise to worry aboutall factors that can reduce the enjoyment for youngsters taking their first shots.

Break the barrel, push home a pellet in the breech, slap the breech closed, and the shots come as quick as you can move- the beauty of the break barrel design after all. As far as muzzle noise goes, there is some, but there’s no twang and little vibration, which is nice. Recoil is modest, and the two-stage trigger, whilst admittedly non-adjustable, is very usable indeed; being fairly light with a small amount of creep. To be fair, if I’d had this trigger when I started shooting, I wouldn’t have complained, since it has the edge over many rivals in this price bracket for sure and doesn’t leave an ache in the finger! As it stands, the straight-line cheek piece looks the part, and proved perfectly formed when using the fibre optic open sights. Opt for a scope though, and it may feel just a little low.

10 shot strings with the M-Blade are impressive, and on test the figures showed a typical total spread of 17fps using BSA Red Star ammo, and just 9fps using Air Arms Diabolo Field. And so, to accuracy over 25-yards. My best efforts managed around 1.3-inches c-t-c, which is fair, especially when we remind ourselves of the low power, the sector of the market this model is aimed at, and that super low RRP.

With the M-Blade aimed specifically at the younger shot, I thought it made sense to get a second opinion from a little chap, James, who shoots regularly down my club. I can do my usual of course and bolt a scope in place to evaluate down range performance, but seeing first hand, whether this rifle scores with anything like its target audience, adds way more credibility to the results.

First Impressions and James loved the looks of the M-Blade, but with the rifle in the aim, he said it was really well proportioned. He liked the compact drop-down pistol grip, and the pictures show that his trigger finger isn’t having to over stretch, meaning the shorter butt configuration is along the right lines. As we’ve already mentioned, a maximum of 6ft/lbs here results in a much easier cocking stroke than would otherwise be possible, and with that in mind, little James had no trouble locking the barrel down. He did need to work on the jolt to open the breech though, but it soon came.

My little assistant, James, is actually12-years old for the record, and whilst the M-Blade suits him, how well this model suits other youngsters, will depend upon age and body shape up to a point. Variation in this department is only to be expected, but one thing’s for sure- the Browning M-Blade is a great little rifle, aimed specifically at junior shooters, who want a manageable gun, with plenty of features. It’s a well thought out design, well executed, and certainly gets the thumbs up here.