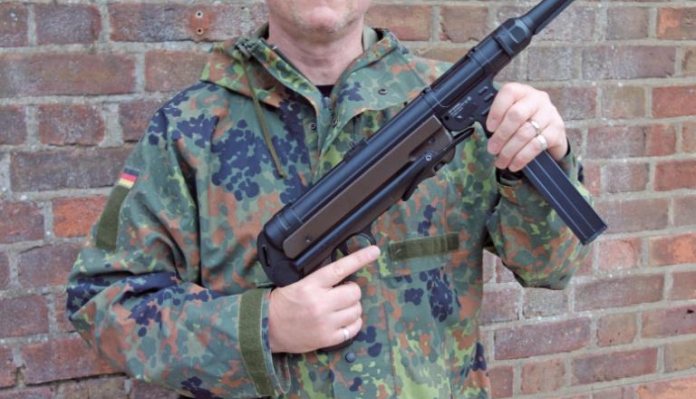 During the First World War, the opposing sides ended up in pretty fixed positions, sometimes a long way away from each other, where long-range bolt action rifle and machinegun fire kept the enemy’s heads down but often the adversaries were only a few hundred yards from each other. There were frequent attacks, often resulting in one side taking over the other side’s trenches for a while, only to be forced back again. Bolt action rifles, such as the German Mauser and British SMLE were the most commonly used weapons but they weren’t exactly the best weapons to use in confined spaces and their rate of fire was obviously limited to how fast the soldier could operate the rifle’s bolt and 5- and 10-round magazines were quickly exhausted. Many soldiers resorted to more medieval weapons and spiked clubs and other such primitive items were employed in brutal, hand to hand combat.

Towards the end of the war, to give them an advantage in these situations, the German troops experimented with high capacity magazines in the Luger P08 and Mauser C96 semiautomatic pistols. Right at the end of the war, the German company Bergmann introduced the first proper submachine gun, the MP18 and was a rather heavy, traditionally made weapon that used the snail drum magazine that had been used to good effect in the Lugers. This simple blowback SMG had a wooden stock, which isn’t really a surprise, all guns had wooden stocks in those days. It was a little late to the game but the ‘Sturmgruppen’ units that were equipped with it put them to good use and this new style of weapon and the tactics employed by those using them caught the eye of most armies. In the 1920s and 1930s, many countries saw the usefulness of these guns and many new designs appeared; most notable was the Thompson that was in development but too late to be used in WWI and was used extensively by American gangsters and police officers.

World War II saw unprecedented innovations in all forms of weaponry, from armoured fighting vehicles, aircraft and warships etc. but it was the small-arms fielded that were really improved over the weapons used in WWI. Long gone were the trenches and the relatively static armies using bolt action rifles and heavy machine guns, the new style of warfare demanded lighter, more portable weapons that had a fast rate of fire. The German army’s ‘Blitzkrieg’, or ‘Lightning War’ was similar to what we now call ‘shock and awe’, where fast moving, heavily armed troops overwhelm their enemy. The way the Germans swept through Holland, Belgium and France was truly breath-taking and one of the small-arms employed was the MP38, often incorrectly referred to as the ‘Schmiesser’.

The MP38, firing the 9mm Parabellum cartridge, was the first truly modern SMG and employed no wood at all in its construction and used plastic for the grip and side panels. Made entirely from steel, alloy and plastic, this superb weapon employed a shoulder stock that could be neatly stowed under the forend or snapped into position and the weapon used from the shoulder. The compact dimensions of the MP38 with the stock folded made it ideal for paratroopers and vehicle crews. This style of folding butt was so simple, yet so effective that it was later ‘borrowed’ by Mikhail Kalashnikov for his AK47 assault rifle – imitation is the sincerest form of flattery, even in the firearms world! Gone was a sidefeeding, snail or box magazine, this new SMG used a box mag inserted from underneath the weapon and could be used as a foregrip, although care had to be taken to prevent miss-feeds. The recoil spring was a selfcontained unit and the heavy bolt kept the rate of fire to a relatively low 500 rounds per minute; this was handy, as this open bolt SMG was full auto only, although single or double shots were possible with good trigger control. The MP38 was later simplified by doing away with the machined receiver and magazine well; the MP40 was therefore easier and cheaper to make, with only the barrel and bolt being machined.

Over one-million MP38/40s were made during the war and were popular weapons and were often used by Russian troops. Overall, it was a reliable SMG, let down by the double column, single feed magazine but that is hardly unique to the MP40. The British copied the feed device for the STEN Gun, which maybe wasn’t such a great idea but they were cheap to make and it meant that British troops could use German magazines if they came across them.

Bang up to date!

Well, that’s the history of the MP40 then but how does this relate to UK shooters, with our extremely strict gun laws? Well, those good people at Umarex have developed a replica of the MP40 that we can all own and shoot, although 9mm Parabellum has been replaced by steel BBs! Umarex are past masters at producing lifelike CO2 versions of pistols and revolvers and to look at, the ‘MP German’ is an almost exact replica of an MP40; it really is very good looking indeed and it’s on the desk as I type this- how sad am?! With the stock folded, it’s 24¾-inches long and 33-inches with the stock deployed. Weight with an unloaded magazine is around 8 pounds, so it’s a bit of a handful but quite authentic; the magazine alone weighs 1lb 5oz.

The main body is made from alloy and includes the ribbed magazine housing with the circular magazine release button that is pressed in with the left thumb to remove the mag for loading. The magazine holds 50 steel BBs, in an in-line magazine that has a sprung follower. The follower is pulled down against spring tension and BBs fed into the loading hole. The follower doesn’t lock down though, so must be held all the time BBs are fed in; it’s not ideal, as it makes things a bit fiddly. Once full, the screw in cap on the bottom of the mag body is removed with the supplied Allen key and two 12g CO2 capsules dropped in; the first one goes in neck first, the second base first. The screwin cap is tightened until a hiss is heard and this signals that the capsules have been pierced.

Before the magazine is inserted, the sliding safety catch in front of the trigger guard is pushed forward to reveal a white dot, putting the gun on SAFE. When ready to fire, with a full magazine in place, the safety can be pushed to the rear, where a red dot is revealed, showing that the gun is ready to fire. The cocking handle that is fitted to the left of the gun is pulled fully to the rear and allowed to travel forward under spring pressure. Sights consist of a hooded blade up front and a two position, flip up rear notch. When the trigger is pressed, CO2 is released behind the BB and it is pushed out of the magazine and fired down the barrel; as this happens, the bolt flies rearwards, as the MP German has a gas blowback action!

I’ve not been lucky enough to have fired a real 9mm MP40 but I can imagine the recoil is somewhat greater than with this Umarex replica but the movement feels pretty good and adds to the realism. We aren’t trusted to have fully automatic airguns in the UK, more’s the pity, but semi-auto is still great fun. Elevation-wise the BBs were impacting where I was aiming at 10-yards with the rearsight fully up but I guess each gun will vary slightly; the BBs were going straight windage-wise, so no aiming off was required. BBs were grouping into an inch or so at 10-yards and the group obviously opened up as the range increased. Empty tin cans were great targets but caution is required due to the possibility of the dreaded ricochets- safety glasses should always be worn!

All that blowback, fast-fire action soon sees the magazine empty of BBs and the two CO2 capsules are good for a few BB refills, so it’s good to buy in bulk! I love the MP German; it’s an authentic looking replica that you can use to safely shoot all sorts of reactive targets but tin cans and plastic drink bottles are perfect. It’s accurate enough for some fun-filled range time and is a great way of letting off steam. It can obviously be used with the shoulder stock in position or folded up beneath the gun but don’t expect to be as accurate in the latter position; however, once you get your eye in, it’s great fun dancing things across the range. As long as all the usual safety measures are taken care of and safety glasses are worn, the MP German can be used by shooters of all ages and I think that Armex will have to keep reordering them from Umarex!