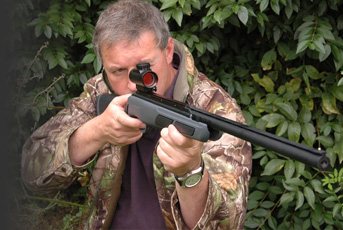 Despite a buoyant market awash with new designs and innovation, the good old basic spring/piston powered airgun still accounts for the majority of sales in this country. OK, admittedly some offerings at the cheap and cheerful end of the market are best avoided, but for the newcomer at least, the simple break-barrel design concept really takes some beating. For ‘break-barrel’ read hassle free shooting enjoyment, and the pleasure to be gained from fast fire fun, free from the constraints of charging gear, should never be underestimated.

Spanish airgun manufacturer Gamo are a big player on the airgun scene, and one glance at their product brochure reveals an extensive range of guns, with specifications to suit most shooters. Unsurprisingly, many break barrels sit pretty in that line-up, yet if I’m honest, I’ve found some of their previous offerings rather uninspiring in the past - competent rather than ground-breaking. Yet my test rifle here has gone some way to changing my view on this famous brand.

For a start, the Viper Skeet is somewhat unique in that it very closely resembles a single barrelled shotgun; complete with a full length ventilated barrel and sight bead.  Gamo include a rather neat red dot sight (more of which later), as part of the package, which sits perfectly with the fast handling theme of the Viper.

A full length grey composite stock holds the Viper action, and this coupled with the relatively light weight, makes for an extremely fast handling rifle indeed.

Intriguingly, a version of this rifle, the Gamo Viper Express has been sold in other markets, offering the option to shoot shotgun style (Viper 25) mini cartridges full of shot. This model isn’t currently available in the UK; nor is it likely to be, according to BSA Guns, Gamo’s UK distributor, yet it demonstrates a willingness on the part of Gamo, to ‘think outside the box’, whether or not the concept has been well received.

The Viper Skeet comes fitted with a pseudo 2-stage trigger, which, whilst not exactly the most sophisticated unit on the market, does manage to release with a reasonably light breaking point. Admittedly some creep has to be taken up, but the end result is certainly no bar to good performance. If I had to criticize the unit, the blade itself would be vastly improved if it simply offered a flat surface to the finger pad, but as it stands, it’s acceptable.

Whilst the rifled barrel takes the form of a steel liner held within a crisply moulded composite shroud, the main compression cylinder is treated to a traditional chemical blue. That bull barrel is left with a smart matt black finish, and the end result, in my view, is a purposeful rifle that really looks the part, and handles superbly. A full length raised scope rail is fixed to the cylinder, offering positive purchase over no less than eleven inches of mounting space, so the sighting options are endless. Indeed, because of the all-encompassing nature of the rail, open rear-sights could be fixed in place, just behind the breech, to be used in conjunction with the front bead, if the need arose. Just having that choice is great, and the Viper is nothing if not versatile.

Returning to the composite stock, the quality of the moulding and material used, coupled with those rubberized inserts, means the Viper Skeet has much to offer the enthusiast, in terms of both function and feel. Weather proofing is obviously a given with this style of stock, yet given the slick streamlining of the action, the composite seems somehow even more appropriate.

So the visuals get the thumbs up, but how does this Viper shape up mechanically, in the real world?

Cocking the action reveals quite the slickest, breech lock-up arrangement that I have encountered in a long time. The cocking effort itself is highly manageable, given the leverage of the full length barrel, but that final lock-up is as sweet and refined as can be. Full credit to Gamo here, as the air of refinement due to fine engineering and a well balanced spring détente, results in a wholly pleasant experience, and a rifle that just begs to be shot repeatedly. One interesting observation is that, in keeping with a few other brands tested recently, this Viper cannot be de-cocked without firing the action.

Get the Ammo Right

Over the chronograph, consistency varied according to the pellets chosen, largely I hasten to add, as expected. Opting for BSA’s own Storm pellets (since the company now forms part of the Gamo portfolio), consistency and power levels were both fairly poor, and came as no surprise, due to the tightness of the pellets in the breech. One of the market leading JSB brand of pellets, in the form of Air Arms Diabolo Field, came to the rescue however, proving at a stroke that the problem lay in pellet compatibility rather than with the Viper. The AA pellets slashed variation to a highly creditable 15fps over ten shots, and energy registered close to the benchmark 11ft/lbs.

And so to the accuracy evaluation. Fixing the ‘Quick Shot 30mm’ red dot sight in place is a cinch, with two large bolts on the side, easily tightened using a coin in the slot. Gamo deserve credit for attention to detail here, as they even include their neatly designed arrestor block, to sit behind the sight on the rails, eliminating the chance of any creep at a stroke.

Sighting in the red dot system is simple too, since there are only three controls to worry about. The two small covered turrets are the conventional windage and elevation adjusters, easily set via a small screwdriver. The large graduated knob on top of the unit is the rheostat and this houses a small disc type 2032, 3volt battery. The Rheostat allows for the usual 11 brightness settings, and the red dot itself shows as a floating image within the 30mm circular tube. The fact that the shotgun style front ‘bead’ is perfectly visible through the sight window just adds to the overall feel of this Viper. Bear in mind that the red dot is fine enough for precise aiming, and suddenly what appeared to me at first sight, to be nothing more than a fun gun, begins to show its true colours. 3/8inch groups at 25yds just blew me away, showing that this Viper Skeet really does shoot as well as it looks.

To say I’m impressed with this model is a genuine understatement. Quite simply this Viper Skeet has forced me to reassess my opinion of Gamo in general. It represents a refreshingly different approach, in a well presented, slickly produced package, and as such, deserves its place in the company’s product line-up. Given the accuracy of the test sample, I would even be tempted to take the Viper on a field trip, and there’s no doubting it has many applications; yet for sheer ease of use, this Viper has to be just ideal for novices; easing them gently into the marvellous world of airguns, whilst rewarding any improvement with genuine performance.