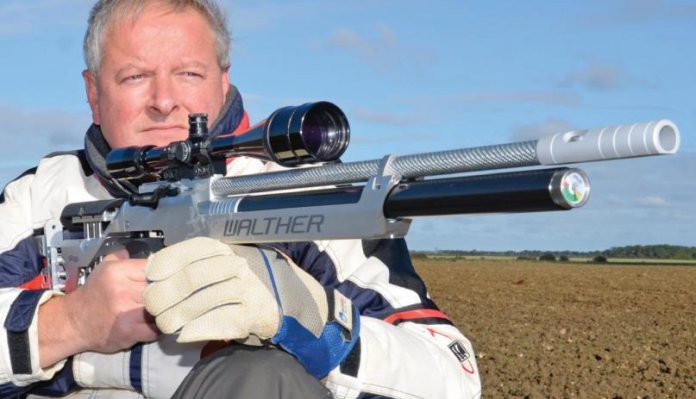 When I got into Field Target (FT) shooting, 40 years ago, it was a real ‘all-comers’ event, and shooters turned up with all manner of basic airguns. Nowadays it’s a different story. Full match-grade airguns are everywhere, with top models from Steyr, Air Arms, Anschutz and the like. It’s become a bit like Formula 1, where prestigious manufacturers want to be seen to at least have a presence.

Successful companies like Air Arms and Steyr, have designed FT models from scratch. Yet several makes of full-blown ‘match’ rifles have actually been based on a 10m Olympic indoor versions, then tuned up to full UK 12 ft/ lbs spec. Recently, companies like Anschutz have entered the fray, with their 9015 HP, which offers full power out of the box.

On test is the latest FT model from Walther, and it’s called the LG400 Field Target. Walther produced the Dominator, based around their LG300 action, and that was a full power model, but their upgraded LG400 was released as a low powered indoor-only spec. Of late, a retrofit factory regulator became available, but the decision to release this full FT specification will excite followers of this premium brand.

The LG400 FT can be purchased with a wooden stock or the Alutec Expert version as supplied to me for test. You can also just buy the action as I understand it, which makes sense, given the propensity for many FT enthusiasts to source bespoke furniture. However, you will also need to purchase a cylinder separately. Order with either factory supplied stock, and the actions in each case are identical, but the wooden stocked version does come fitted with a much-simplified butt hook assembly and costs about £600 less than the Alutec.

This Walther comes supplied in a plastic hard case, which is very deep, so the rifle and a large FT scope may actually still fit back in the case. Now there’s a novelty! Additional kit includes a DIN charging adaptor, pull-through cord, 50m test target and a tool that includes all the necessary extended Allen keys.

There is tonnes of adjustment available. The pistol grip and cheek piece are what Walther term ‘Protouch’, and whilst looking like composite, they are actually formed from coated wood. The end result works really well and is snug to the touch. These rifles are supplied with a large grip as standard, but Walther does supply small and medium grips too.

Slacken off the bolt on the underside of the grip, and it can rotate to suit. Do this first, as the bolt may become awkward to reach. There’s an access hole in the side of the grip, and this allows it to be slid down or up. Come in from the top, and the grip can be moved forward or back, and there’s even movement on a ball joint to off-set the angle. The cheek piece angle can be altered in the same fashion, laterally, vertically and for cast and angle.

FT shooting has pushed and nurtured the role of the butt hook, and with the grade of rifle on show here, it would be remiss of Walther not have indulged themselves, and they haven’t let us down. The back section with main slider adjusters and knurled locking wheel, are lifted straight from the indoor target version of the LG400, but the backplate and riser assembly, including extended hook, are all new for this model. Overall, the level of adjustment possible is incredible.

Walther has designed this model to have a removable main cylinder, and whilst I now appreciate this is a nice safety feature, as in the vessel can be easily tested further down the line, having to remove it to fill the rifle is irritating.

To charge it, first unscrew it from the action, which can be done at any time. Screw the cylinder into the DIN adaptor and then screw this assembly straight into the large connector on a divers bottle. Walther recommends a fill pressure of either 200bar or 300 bar. I would always go with the lower figure, since you place the components under far less strain, and you still get plenty of shots.

The ‘dry-fire’ mode is activated by cocking the action, then with the side lever up, press the side button to ‘T’ (test), then close the lever, and thereafter the trigger mechanism can be tripped, without discharging air. The 2-stage trigger is superbly crisp and fully adjustable for first stage weight and travel plus second stage weight and let-off point. It can also be adjusted to be single-stage, and with a release weight down to less than 2oz, we are talking all things to all personages! It’s also got a directional shoe that’s fully adjustable for height, position and angle.

The plain, rather utilitarian cocking lever is an improvement on the basic lever fitted to the preceding Dominator model, yet I still reckon Walther need to up their game in this department. The lever is easily reversible (you then push down to cock instead of up) with one Allen bolt holding it in place, and it can also be fitted to the left-hand side to suit southpaws. The fact that the arc of movement includes an external articulated link remains a crude inclusion on such an upmarket rifle. FT shooters love to customize their kit and I can see several bespoke levers coming into play. As for the articulation, it can foul scope mounts if you’re not careful, so something to bear in mind when fitting glassware.

OK; we’re almost ready, but there is the small matter of the barrel. Firstly, that attractive carbon fibre shroud sits within a metal support bracket, and whilst I’d heard that it was adjustable to ‘tune’ the harmonics, close inspection just shows the shroud sitting fairly snugly inside, with little room for manoeuvre. I can’t see many FT competitors leaving it in place, to be honest.

The old Dominator FT model had a shrouded tube with barrel weight, whereas we now have a new, fully adjustable air stripper. A small cone sits inside to strip excess air from behind the pellet, and the distance between the cone and the lip of the barrel can be altered by the screw above. Play around with the gap, and groups will change slightly. To be honest, I shot my test rifle straight from the box as supplied and accuracy was spot-on. Rolling a pellet into the loading channel is easy and cocking effort is even spring-assisted as the lever hits its midpoint of travel.

The LG400 Field Target’s regulator is based on the latest version that was used in the Dominator. My test gun came with a target card showing a tight sub 1/2” group at 50m. Using Weihrauch FT Exact pellets, I managed several c-t-c 1/4” groups at 40-yards, so all pretty text book.

It’s not so much just the accuracy on offer here though, rather the manner in which the shot is delivered. A satisfyingly crisp snap from the muzzle, and a dead feeling from the action, just instils confidence. Over the chronograph, it produced 11.7 ft/lbs and I clocked 150 shots from the 200bar fill, within a spread of 24fps. Not exactly mind-blowing consistency, but competent nonetheless.

I reckon some sort of stock raiser should be supplied as standard, but at the moment, the hamster issue is resolved with an optional extra. Walther doesn’t make a riser specifically for this model, but UK importers, John Rothery Wholesale, supply one as an optional extra. It costs around £180 and is designed to slide and lock straight into the LG400’s UIT accessory rail. Admittedly there are reams of after-market options to consider, and with FT shooters renowned for their desire to customize, perhaps this lays behind Walther’s somewhat reserved approach.

That bland, slightly rough cocking lever still grates, the external cocking link is an irritation, and the gauge is in a dangerous position to view. There’s also the small matter of weight; 10.2lbs as supplied for test, sans glassware, and discounting any stock riser kit. That said, speak to many of the current top FT shooters and they’ll tell you that they see that very same weight as a selling point; bringing stability and allowing them to ‘plant’ the rifle in position.

This area divides opinion, but there’s no doubting the trend is for heavier kit in our flagship airgun discipline. If the weight’s not an issue, then it may be time to appreciate the quality on offer here and see the Walther LG400 Field Target for what it is; a serious contender. Not perfect by any means, but it is in effect the perfect platform for today’s FT enthusiast, looking to progress. A full-power rifle straight from the box, beautifully machined, ‘tweakable’ to the nth degree, and superbly accurate and refined. Walther is indeed back in the game.