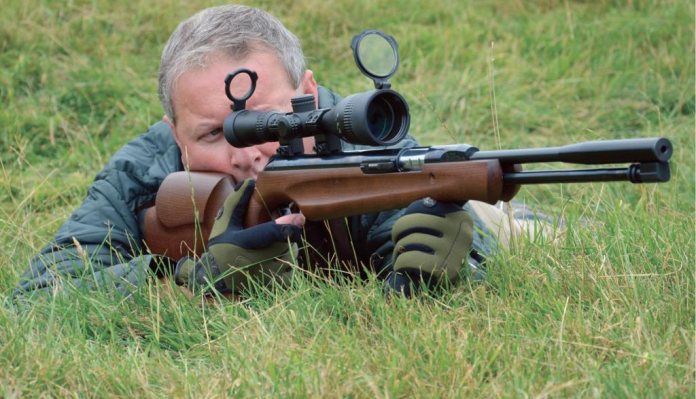 Visiting the Umarex factory in Germany, a while back, was undoubtedly an exciting experience. Seeing close up, first hand, the astonishing attention to detail and care taken in the production process, of a variety of shooting products, was a revelation in itself. Yet for me, the highlight of the trip had to be the production line and assembly of the Walther LGV break-barrel air rifle.

I’ve long held a fascination with highly tuned springers, and with the LGV, the idea was to incorporate pretty much all that had been learnt over many years of experimentation and research, into a factory production airgun. The result was a breakbarrel design that shot with an incredibly slick action, no spring resonance, and only modest recoil. Inevitably, a fixed barrel version would surface at some point, and on test here is the very latest incarnation – the Walther LGU. Excited? You should be!

Up close, the LGU is clearly a serious piece of kit, and at 9.5lbs, I would suggest it’s for adults only! Unlike pneumatics, spring-powered airguns have to make room for the on-board power plant, and that includes a relatively heavy mainspring and piston configuration. There’s really no way around that fact, but sheer mass also helps to absorb recoil, and it’s no coincidence that some of the most pleasant spring guns to shoot, are also among the heaviest.

First impressions with the LGU are favourable indeed, and close inspection reveals a gun which is particularly well engineered and finished. Weihrauch’s HW77 set the blueprint for fixed barrel, direct-feed configurations and the LGU closely follows this ground breaking yet now classic design. Yet the high-tech internals undoubtedly give the LGU the upper hand, making it more pleasant to shoot, straight from the box. So, with this aspect so relevant, let’s first take a closer look at what’s going on inside the action.

First, we have ‘Super Silent Technology’, and these are the measures that Walther take to limit noise in the rifle’s action. ‘Zero-play fit’ means that they have added nylon bushes and small pads around the internal bearing surfaces wherever possible, and it really works.

The ‘Vibration Reduction System’ is Walther speak for ensuring an ultra-smooth firing cycle. This is achieved by incorporating piston rings made from a low friction synthetic material, with the result that there’s zero-play around the piston itself. The design has been monitored in development, and the end result is an optimised piston, that brakes on an air cushion at the end of its travel. Transfer holes are drilled for each energy level, at optimum locations, which all helps to dampen recoil. The mainspring is made from specially tempered valve spring wire, whilst a full length, close-fitting spring guide kills resonance at source. The result is really rather impressive, as we shall see.

I’ve already stated that this Walther is an adult affair, and the well-proportioned beech sporter stock is another good reason for that assessment. That oversized, drop-down grip is nicely shaped, and comfortable in the aim, with its pin sharp, laser cut chequering, but it does favour the larger hand. The prominent, defined cheekpiece, and extended forend also allow for a full stretch, and the result is a full sized sporter, that feels satisfying to use. Super smooth matt varnish finishes the woodwork beautifully, but couple that with the quite superb rich chemical blueing of the metalwork, and what we have here is a top-class spring gun to please the most demanding of enthusiasts. It should be noted too that the very latest versions will include an adjustable butt pad too, which is a great idea too!

Airguns of this class demand that a scope be fitted, and with this in mind, Walther pre-drill holes in the receiver to accept arrestor studs for the mounting system. One point to note here concerns the fact that clearance needs to be left around the sliding breech area, with a scope fitted.

Fit too long an optic and it could become a fiddly affair, trying to chamber a pellet.

Cocking the action just needs the underlever to be pulled downwards from the silencer/ catch assembly. It’s held in place by a springloaded ball detent, and whilst this is easy to use, it does mean that if sling swivels are on the agenda, these are best fitted somewhere other than around the underlever, since it doesn’t lock!

Bearing in mind the relatively short, 12-inch, carbine-length barrel, the effort required to compress the mainspring using the similarly short underlever and cock the action, is extremely modest. The action is super smooth, and with those two large rubber O-rings sitting at the tip of the lever, the cocking hand gets a safe grip, whilst vibration between the lever and barrel is eliminated.

Safety is a key issue with this style of under-lever airgun, and Walther have taken no chances, with their ‘belt and braces’ approach being very visible. A side ratchet, anti bear trap system is built in, almost identical to that used by Air Arms on their TX200 series. The idea being that the sliding breech is prevented from flying forwards to crush fingers in the loading port, whilst inserting a pellet. ‘Best practise’ dictates that when cocking and loading any under-lever airgun, the lever should be gripped and held firmly whilst chambering a pellet into the barrel with the other hand.

With the LGU, pull the lever down and you’ll hear the ratchet catching on each internal tooth in turn. You can even cock in stages and take a rest along the way or depress the side bar at the same time as pulling down the lever, to achieve a silent motion in the field. Push home a pellet flush with the breech, close the lever, and all you then need to do is flip off the automatic safety located at the rear of the action, which pushes up for FIRE and reverses for SAFE. We’re now ready for action!

As one of the biggest names in gun manufacture, Walther are experienced enough to appreciate the importance of a decent trigger on any top-class rifle. The LGU comes fitted with the same excellent unit as the break-barrel LGV, and it is a proper 2-stage affair, where sears move on the first stage. However, despite the blade being particularly comfortable and nicely broad, I found it sits just a little too far forward, with a small amount of over reach the result. Triggers can be highly personal of course, but I have fairly large hands.

Over the chronograph, a 10-shot string returned a highly creditable 12fps extreme velocity spread using Air Arms Diabolo Field pellets. Weight of expectation was enormous with this rifle, adding pressure to my testing session! All that built-in sophistication and features designed to tackle recoil, should of course make a difference, and thankfully they did! The design allows the piston to rotate as necessary on firing; so, torque (piston twist) is all but eliminated.

Theory is all very well, but the action really did feel incredibly muted and slick in operation, which all importantly, translated into impressive results down-range. Best groups on test surprisingly, came from Daystate Rangemaster Li pellets, since they were particularly tight in the barrel, but when you consider that the JSBs (Air Arms Diabolo Field) were still capable of ¼-inch centre-tocentre groups, you can begin to appreciate just how good the LGU concept is! Shooting from the over arm, Field Target (FT) sitting position, I still had to do my part, but performance was beyond question.

As previously mentioned, finely tuned, spring-powered airguns have always held a fascination, and my early FT days, competing with Airmasters’ ‘specials’ taught me much about this mysterious art. When I say that this LGU model could hold its own against those specialist high-end performers, you get some idea as to the refinement and performance on offer.

Weight is the governing factor though. Get past that stumbling block, and if the LGU suits, straight from the box, it has to be one of the slickest shooting ‘springers’ available, for HFT or even Field Target shooting.