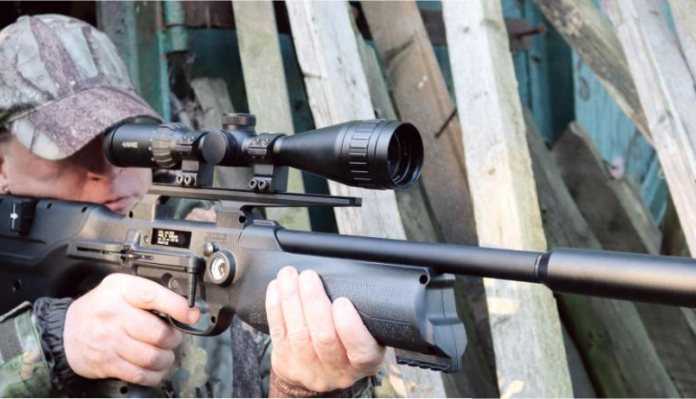 Once mainly known for their low-power CO2 powered pistols, there’s no denying that Walther have made huge leaps and bounds in the quality and diversity of the 12ft/lb airguns they now offer.

In respect of their PCPs, they’ve now more than established themselves with the Rotex RM8 family, and it follows that like many other manufacturers they’d eventually release a bullpup. Well with the launch of the Walther Reign that time has obviously arrived, so without further ado, let’s check it over.

While to some extent, all bullpup air rifles are radical in design the Reign has to be the most radical by way of the action and buddy bottle being fully encased by the stock. This has caused some debate because to do this the outer has to be made from a material that is strong, can be moulded to be ‘hollow’ yet have external features that give you a decent handle to hold. So, you could say the Reign’s stock is quite a controversial feature of the rifle – because what you basically have is a matte black polymer shell assembly.

Now although the rifle looks and is quite a chunky chappy, upon first handling it does feel a tad alien, not only because it’s so incredibly light but it goes against what we’ve become use to in bullpup design. One reason for this is because the action is fully enclosed, you don’t have to fear feeling cold metal against your cheek; however, this area is where the rifle displays some quite intriguing attributes.

The Reign shows a lack of cheekpiece having a top aft section that runs back parallel with the rifle, and however because it’s quite low, when shouldered for sighting through an optic, the sighting system needs to be very well considered. This is because if you scope up in high mounts your cheek will actually ‘hover’ above the rifle’s butt section. So, this means if you want to fit a scope with a large objective lens then you’ll have to adapt to shooting with quite a strange head position.

So immediately you can see this certainly isn’t your run of the mill air rifle by any means. However, the butt can boast a very nicely curved ventilated rubberised yet sturdy thick butt-pad and a very generous thumbhole. The latter of course lies behind a steep drop-down pistol grip with palm swell which also has finger contouring on the rounded front face.

This is where the rifle begins to feel more comfortable in the hold and the grip also has decorative moulded grip panels reminiscent to those seen on the Rotex RM8 Varmint. The forend takes even more from that rifle having a short bulbous and deep bellied profile and uses the same type of patterned grip aids for almost its entire length.

The underside also houses a short run of Weaver/Picatinny style rail for accessories such as a laser, light sling swivel or bipod. The fill point is next to the air gauge positioned on the right-hand side of the stock. When not in use it has a pushfit grommet to keep out dirt and grime. Though you have a recommended 232-bar – the gauge is highlighted red at 230- bar so deciding on that as my fill the rifle should still return the stated 140 shots in .177 and 180 in .22 calibre as per rifle on test. The spec for the .22 calibre I found to be pretty much true and what’s equally interesting is the Reign has a regulated action.

A very smooth and precise operating biathlon style sidelever runs the action which can be fitted to either side of the stock, it’s recommended you request this done on ordering or take it to a registered dealer for adjusting. Incidentally, the manual safety can also be reversed to operate in the direction you prefer as well.

To make this even more of a ‘truly’ ambidextrous rifle, the 10-shot sprung block shape magazine can be placed into the left or right of the action. To remove from either, you pull the sidelever fully rearward, then pull it from the side it was inserted into. Incidentally, you’ll notice it positioned well back on the top upper edge of the rifle’s butt section. I mention this because coupled with the other ‘side-interchangeable’ position features, it’s obvious the company have really thought out the design to cater for all tastes.

The magazine casing has a couple of ball bearings on the outer (front) face which help locate and secure it into the action. To load, you need to hold the magazine with the white lettered and arrowed outer edge to the right and drop a pellet into the first chamber you can see through the faceplate. Then turn the inner rotor anti-clockwise against spring tension until the next empty chamber appears. Then place a pellet into that and it’s a simple matter of repeating this process until all 10 are filled. As mentioned, the magazine has a large arrow on the outer edge indicating that this should also point towards the muzzle (front) when the magazine is being loaded into any side of the rifle.

Incidentally, in .177 calibre, the Reign’s removable magazine will hold 11 pellets.

The raised scope rail is a lengthy one and accommodates the fitting of any size optic you desire. Now here I will once again stress the importance of choosing a scope that suits the rifle’s build and design.

I opted for a Hawke Airmax 4 – 12 x 40AO AMX which I soon secured onto the raised rail using 2-piece medium height Sportsmatch mounts. Set up in this manner gave a comfortable head rest position on the stock plus correct eye-scope alignment.

The rifle’s 2-stage adjustable trigger sits within an integral trigger guard and the blade is nicely curved and of a generous size. There’s a manual push button ‘cross block’ style safety positioned above and in front of the main blade in the body of the stock itself. On the test rifle, the trigger released predictably and as it came pre-set from the factory, I saw no reason to adjust it. If you feel the need to tinker with yours (snigger), then remember I used the terms ‘assembly’ and ‘shell’ when referring to the stock. Well it’s at this point you’ll need to remove the stock, or should I say, unscrew the fittings that hold both sides of the casing together to get at the trigger adjusters or indeed any part of the action. In this instance, this wasn’t required but I reckon this procedure should only be done by someone with experience because before you get to the trigger adjusters – dismantling the stock seems quite a task.

The free-floating match grade Lothar Walther barrel is fully shrouded and has a ½-inch UNF screw cut muzzle to accept all popular cans. Obviously, a compact can is the ideal choice for any bullpup so here I again used a silencer that has recently impressed me – that being the Umarex K3 Neo. I’ve praised this in past rifle tests and once again I’ll praise it again as it tamed the Reign’s muzzle report to a very acceptable level.

Now, upon firing as the trigger breaks you do hear what is termed internal hammer strike, this is also made more pronounced due to your ear being next to what in essence is a hollow stock. Therefore, the sound resonates and is possibly amplified to some extent. However, have someone else fire the rifle while standing safely away to one side and the sound isn’t at all alarming or in my view cause for concern.

It’s a trait of the rifle you’ll either understand and accept or dismiss and deal with, but as for the rifle’s accuracy – this is something all will appreciate.

After setting a 25-yard zero, the rifle produced sub ¾-inches groups right out to 35-yards.

Consistency was impressive and the rifle didn’t seem to be pellet fussy but I’d advice – as I always would – and that’s stick to quality ammo you can trust.

Bullpups are a specific style of air rifle that people either flock to or run from as personal preference is a key decider. However, now with far more choice amongst pups, this is not only the major reason for choosing one as there are a wide variety of different styles that offer different and specific features. This could be the compact dimensions these rifles display or the feel, and even the overall look. The Reign has another trait, that being it’s incredibly light and therefore a highly responsive rifle. In that respect I’m referring to the fact that it’s easily effected by sloppy or bad gun handling and off course trigger technique/control. Slightly move a light gun such as this which is very easy to do upon firing and this will result in shots going badly off aim.

Now when you combine all the features of this rifle in this, I certainly include stock design, build and the rifles weight you have a very individual gun. Yes, even for a bullpup this is radical in fact possibly the most radical we’ve seen so far.

If a more substantial pup is to your liking then there’s a host of candidates out there to choose from but if you want the most radical of military styled, lightweight and highly accurate ones available – then look no further.