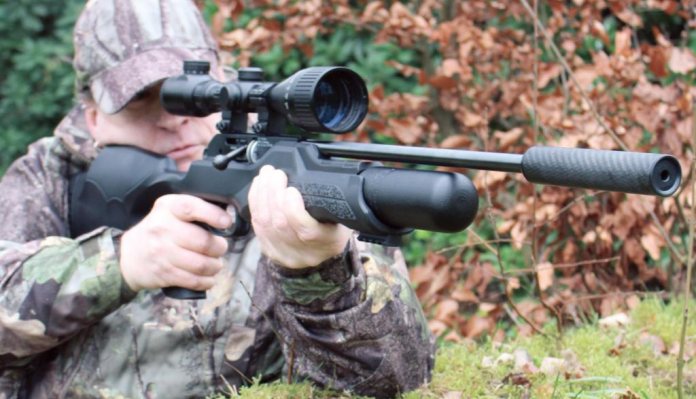 The Walther Rotex RM8 has been a progressively popular MS PCP, not only due to performance, but also its very affordable price tag.

Encouraged by this, Walther decided to release a synthetic variant, but I’d wager that they’ve taken a good look at the current market, as this model is offered in a thumbhole stock design many now prefer and for this it’s also been given the designation – Varmint.

The ambidextrous all-weather black synthetic stock retains a high and very well defined cheekpiece with a nicely curved, ventilated black rubber butt pad. Behind the grip is the now familiar elongated thumbhole, which combines with a very slim and quite narrow neck ‘bridge’, to give easy and full access to the steep, dropdown pistol grip. This also has a very generous palm swell, and the forward area is curved and contoured for maximum finger contact to give a very assured hold.

The forend is best described as swelling out in quite a ‘bulbous’ fashion and has a thickset overall feel, which begins with a wellrounded underside that curves slightly inwards, to where the fill point and neat button size air gauge are set adjacent to each other. Just forward of this, the underside then curves slightly outwards to another flat area, where the company has installed a very useful run of alloy Weaver rail. This ends at the most forward point of the underside, where the tip neatly extends part way under the buddy-bottle, so you’re leading hand doesn’t feel the cold metal of this air tank.

Instead of chequering, the stock is adorned with very decorative patterning that consists of raised eclectic shaped separate panels of aggressive ridging. This is applied along most of the forend, plus is seen wrapping around the underside. This is complemented on either side of the grip, where the company’s logo is also clearly seen moulded into the lower side sections of the very stylish and sturdy handle. All this combines to not only make this a very easy rifle to hold, but the patterning makes it all the more stylish and results in a rifle that certainly has a quite unique overall cosmetic appearance. Talking of looks, the bulb-ended buddy bottle has been bead blasted, which adds even more individuality and is as practical as it is stylish, resplendent in a matt black finish.

Charging the fixed 200cc air tank is via the deeply recessed fill point mentioned earlier, which takes the elongated brass fill probe supplied. The company state a recommended 232-bar fill gives approximately 160 shots in .177 calibre (as per rifle on test) and nigh on 180 in .22.

The action is side-bolt operated and, although practical and easy to operate, there are a few particular nuances of particular note. Obviously, to remove the 8-shot alloy magazine, the steel ball end cocking bolt needs to be lifted from its original forward position and pulled back until it locks fully rearward. Then, to remove the magazine from its housing, you need to slide back the slim, lengthy oblong shape serrated outer edged release catch positioned directly behind the housing on the right. Once slid back, you can then lift the drum-shape magazine out from the left-hand side of the action.

To fill the magazine, you just place a pellet into all the empty chambers with the centre boss facing you, ensuring that all pellet skirts fit flush or below the mags rear face. Once filled, slot the mag back into its housing and then push the cocking bolt forward and return it down to its original position. Yes, you read that correctly, as upon returning the bolt to its original position it takes the retaining catch ‘forward’ with it; so, effectively, if you forget to manually close the catch (which you can do first if you prefer) the action does it for you.

It must be noted that the trigger unit is equipped with an auto safety positioned at the rear of the action, which engages (pops-out) every time the action is cocked. Also, it uses what is known as a ‘double safety system.’ This requires the slim vertical slide catch positioned on the safety’s outer edge (facing you) need be pushed down and inwards, before you can push the main body of the safety in and therefore fully disengaging. It’s a safety within a safety so to speak; once used to this particular nuance of operation, it doesn’t overly slow the procedure, rather ensures when primed, unless manually overridden the rifle is always on safe. To visually display status, when the safety is fully pushed in, a red dot can clearly be seen on top of the action’s rear base plate indicating it’s now ready to fire. If you should decide to hold off taking a shot, it can be manually re-set at any time by simply pulling it back using your thumb and forefinger.

For test, I teamed the RM8 Varmint up with a Richter Optic 3-9 X 50AE in a pair of high mounts, which suited the rifle’s high cheekpiece perfectly and, due to the uninterrupted receiver, fitting any size of optic won’t pose a problem. I was soon achieving ragged .177 pellet-size groups at my 30-yard set zero, which only opened out to sub ½-inch groups when I pushed out to the 40-yard mark. The more I varied pellet brands, I’m pleased to report, as long as I fed the RM8 quality lead, it wasn’t in the least pellet fussy.

The ‘XT’ 2-stage adjustable trigger mechanism has a nicely curved blade but here again we come to a nuance quite rare to hunter PCPs, that being its only adjustable for length of travel and not let off, which is factory pre-set. I didn’t realise or notice this on the original wood stock model (which of course uses the same trigger), so it couldn’t have been that ‘alarming.’

However, this time I had more time to spend with the rifle, but if I hadn’t been instructed on this I wouldn’t have cared, as the trigger trips the sears crisply and cleanly and, by my reckoning, is a unit that isn’t in the slightest one to cause concern. Anyway, we shouldn’t want a hunting rifle to have a hair-trigger.

The free-floating barrel has a very stylish ported ‘muzzle brake’, which serves no real purpose other than to protect the ½-inch UNF threads it’s screwed onto, but it does of course add to the rifle’s cosmetic appeal. However, for practicality, most hunters will fit a can of choice and using several popular mods at my disposal, all proved that the RM8 is a rifle that has a very low signature upon firing. However, an average size silencer will add up to 6-inches to its overall length. The only way you can get a balance between reasonable sound reduction and not making this overly lengthy is to use a reflex design mod. For most of the test, I spun a Daystate Airstream Mk5 can up-front and, although the rifle wasn’t totally hushed, it became far more acceptable.

The Walther Rotex RM8 Varmint is undoubtedly a top-quality PCP; it’s not overly heavy, is very accurate, plus handling and balance are highly desirable for such a chunky mid-weight gun. The stock design is one of the standout features, as it certainly feels good in the hold, sits solid on aim and is very stylish to boot. The underslung weaver rail is a useful feature, ideally positioned to accept an appropriate bipod.

However, I’d like to see Walther address the length of the barrel, as if made shorter, then any standard can of choice could be fitted without making the rifle overly lengthy. Having said that, if you’re looking for a multi-shot PCP to use as an ambush hunter, shooting off a bipod, then the Walther Rotex RM8 Varmint will certainly deliver and won’t cost the earth, even when teamed up with the necessary accessories of scope and pod.