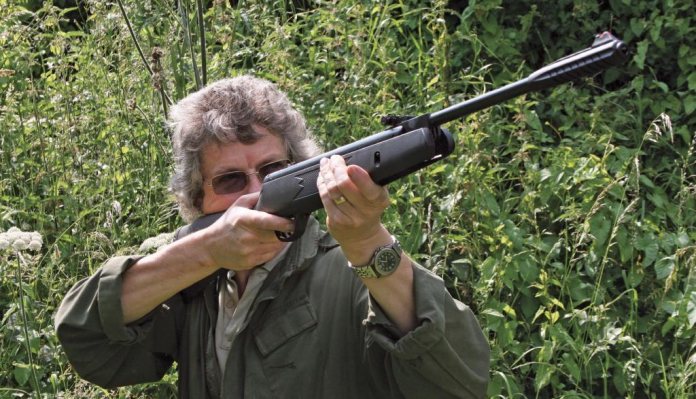 Since Webley is now no longer English made and fashioned in Turkey, prices have fallen, which is good for the consumer who is ever becoming more vigilant at cutting costs but still demanding quality. The Webley VMX (Value Max) D-Ram is one such rifle, aimed to please a large segment of the airgun fraternity. Cheap at £149.99, with this particular version housing not a spring piston but the D-Ram gas ram system made popular by Theoben many years ago.

The D-Ram is typically Sporter in looks and profile with a black synthetic stock, ideal for hunting and available in .177, .20 and .22 – the latter model being the one on test, although as a .20 cal. fan I’d like to try that one too at some point in the future.

It feels light and it is 6.45lbs by my reckoning without a scope fitted. It has an injection-moulded two-piece stock, the two halves being cemented together. It is therefore light, but very hollow feeling with the forend feeling very flimsy around the receiver area. It has a black/charcoal moulded in colour with a matt semi-textured feel which is subdued for hunting and gives a pleasant look. There is moulded in checkering to the pistol grip and forend and is ambidextrous in profile so great for both persuasions. This is enhanced by a cheekpiece to both sides with a small Monte Carlo comb. There is also a black vented hard rubber recoil pad and the length of pull was a healthy 14.75 inch.

Overall it’s a practical stock that will shuck off the weather, dirt and mud.

Rather than the typical spring piston propulsion the D-RAM uses its own version of the gas ram system. Here a compressed air cylinder is used instead of a spring for a consistent and noise free power plant.

There are several benefits to this system; there are fewer moving parts so it is lighter and faster than a conventional spring piston and it can be kept cocked for longer. Here you can load your rifle and keep it cocked whilst hunting so it is instantly ready to shoot if a rabbit pops out. No cocking the rifle with its break barrel operation and risk having your quarry spot you.

The action has a very quick action, this also helps reduce noise although there is a faster “thok” noise rather than any spring twang. Also the benefits of the lock time is significantly improved, so less chance to wander off your target as you pull the trigger, this will certainly help in the accuracy stakes. It is also a sealed maintenance free system. The barrel is 17 inches long and encased in a polymer sheath with the actual barrel being 16.5 inches inside. The muzzle is recessed with eight inverted slots and seven slots cut into the plastic shroud for effect.

Lock up is via a standard chisel style detent system with a black ‘o’ ring seal. On this D-Ram it was loose, but you can easily tighten it up to ensure a perfect union. The action and barrel are blued in finish and the cylinder has a 6.5 inch dovetail and screw down recoil arrestor to stop scope creep, with three differing positions. You will need it as the snappy fast action of gas rams can shift even the sturdiest mounts.

The trigger-guard to stock is a one-piece plastic unit held by two Phillips screws which blend with the rest of the stock. The trigger blade itself is curved metal with a blued finished and smooth to the touch.

Regards trigger pull, well, the Stingray model has a good trigger, but this D-Ram is not the same! Very long first stage pull and then a vague let off. Not that heavy though, but it needed practice to get the sear break point right, and into your ‘muscle memory’ for consistent accuracy.

The safety is an auto unit that actuates when the rifle is cocked and thus a push forward on the latch with your thumb is all that is needed to flip off and fire the D-Ram.

As with most Webleys, this rifle comes with a very good set of open sights whether you want them or not – I like them. They are highly visible in most lighting conditions. The fore sight is incorporated in a plastic shell around the barrel itself and has a vivid red fibre dot. The rear sight has twin green dots for alignment and adjustemnet is made via a thumbwheel with increments from 0-9 for elevation with windage just marked ‘L’ (left is counter clock-wise).

The D-Ram is light, even with a scope, so good follow through after the shot is essential. The cocking effort is typically gas-ram in nature, not heavy but quick and sudden, unlike the longer slower spring ‘decompression’ on a conventional spring powered rifle. The firing cycle is very quick with a loud snap to it from the action and also a loud muzzle report. That’s fine but there is no provision for a sound moderator. The trigger is ‘very safe’, a long pull and then vague sear break to it. Despite this I managed some nice groups but truthfully you need to practice to eke the best from the D-Ram.

It liked the lighter pellets on tests, although the Logun Penetrators gave the best accuracy at 0.85 inch for five pellets at 25 yards at a velocity of 548.5fps for 10.6ft/lbs energy. Highest velocity went to the Paragon Z2 pellets, not surprising as they were the lightest at 12.0-grains for 615.7fps and 10.1ft/lbs energy, but accuracy was 1.0 inch at 25 yards. Highest energy went to the A A Diabolo Field pellets weighing in at 16.0-grains dead producing 561.2fps for 11.2ft/lbs energy but again only 1.0 inch groups.

Despite the long trigger pull the Webley D-Ram is a fine air rifle ideally suited to short range hunting or plinking. At a price of £149.99 it is actually very good value for money although the Webley Stingray model has a better stock and trigger if you want to upgrade.