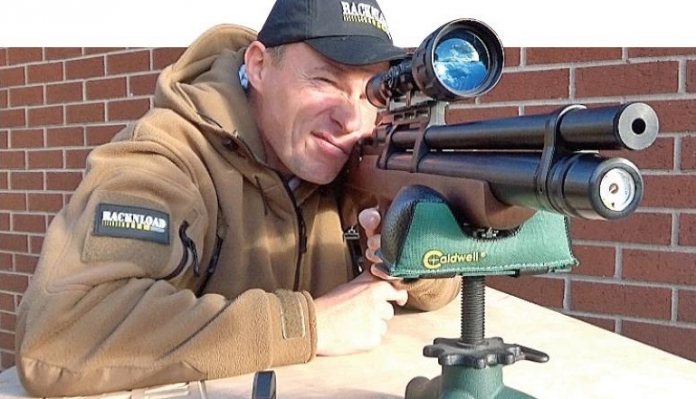 The Mastiff is a pre-charged multi-shot pneumatic (PCP) semi bullpup rifle that has a side-lever action. Take your pick if you want to run it with either a magazine in, or the single shot pellet tray ( supplied) which is a real nice touch. My tester was in 22 with a 12-shot mag, the 177 version takes 14, so good capacities. I’m not overly fond of cassette-style magazines and these are just like the FX and Kral ones and find them a little fiddly! Not only that but they do rattle a bit once loaded, so hunters be aware! (Give me an HW100 mag any day!) On a plus side, they do keep the muck out and the pellets aren’t going to fall out.

Let’s start at the butt. The recoil pad is rubberised and fairly soft and is vertically adjustable via a spring-loaded button, which is quick to use. The Turkish walnut stock is so very sleek, although it does feel like it needs finishing off with a bit of oil or lacquer, to my hands it felt just a bit ‘sanded’, if that makes sense?! However, ten points to Webley for making it an ambidextrous plank of wood though, because us lefties do exist! The cheek piece is height-adjustable via two Allen screws, so you can soon get this gun set up for yourself.

Moving along to the thumbhole and pistol grip that are comfortable, in fact, I found this particular semi Bullpup to be one of the most comfortable I’ve used and, for a lefty like me, surely that’s a good thing! The aperture offers plenty of room for a gloved hand (or thumb that is) and the flowing wooden trigger guard has enough room for a gloved finger too. The forend has plenty of real estate for your hand, but I would have liked to have seen a bit more stippling, as there is only some on the underside. What is there is nice and has ‘Webley’ in the actual stippling done by a laser by the looks of it. I think a bit more ‘finishing off’ of this stock would have made this rifle a lot classier looking. However, on the bonus side, there are fixed sling swivels pre-fitted, so that saves a job, pity they weren’t QD studs!

The trigger is really not bad, especially for a Bullpup and, on my trigger pull scale, it broke at a rather crisp and very light 1 pound 10 ounces! It is adjustable too, but you have to take off the stock, which is a bit of a pain. The blade has an adjustable pad for height and angle, which is always good to see, especially on a gun that is around the £500 mark! You don’t very often see that on guns twice the price. The safety catch is manual and located on the right-hand side of the action, just underneath the cocking lever. The side-lever offers a reasonably smooth movement when cycling, but I did notice that it had a bit of vertical slap to it, yes, I used my oh so scientific rattle test!

Juicing the Mastiff up via the supplied probe is easy, with no fuss. The 280cc air reservoir’s inlet port is protected by a sliding cover, rather than a plastic plug. The pressure gauge (manometer) is up front at the muzzle end; I’m not keen on that, as looking down the barrel is worrying regardless. Expect to get around 100 shot per fill in .22 and around 80 in .177. As this rifle is unregulated, shots will start to drop off after these numbers mentioned.

A 16”, precision rifled, match-grade barrel is fitted and is ‘shrouded and ballistically baffled’, according to the manual. In other words, inside the shroud, the barrel is surrounded by baffles and sound-absorbent material. That said, it did run pretty quietly. It’s not free-floated, as it’s braced or clamped to the reservoir.

The receiver is aluminium and, to be honest, is pretty plain in matt black but has Webley Mastiff 12 and their winged pellet logo, laser-etched on the right-hand side. There is a nice big intermount with Picatinny base up top, with plenty of room to throw on a scope of your choosing. The test glass was a Nikko Stirling Mount Master 3-9 x 50, which wouldn’t have been my first choice, but the combo did deliver decent results. The gun comes supplied with a hard case, which is something I really like to see these days, although the clasps on it did have a tendency to pop off occasionally!

So, now the range time! To load up, fully open the action and slide in the loaded magazine from the right-hand side, close the lever and the mech is cocked and a pellet positioned in the chamber. The manual safety catch is great on a multi-shot PCP like this, as an automatic (self-setting) type is a pain, especially when you want a fast follow up shot! Nice too is the fact that once the magazine is empty the gun will not fire! Accuracy wise, the Mastiff shot well on my 30 yard test range, leaving nothing bigger than ¼” groupings on paper. That was using Accupell pellets, which the manufacturer recommends. Overall, I really like the rifle, particularly the fit and feel, but it would be great to see more of a finished off stock, as far as the walnut one is concerned. Maybe some other options would be good too. It was accurate and easy to use, as well as well-balanced, considering it is nearly 9lbs in weight! Safe shooting! - Rack.