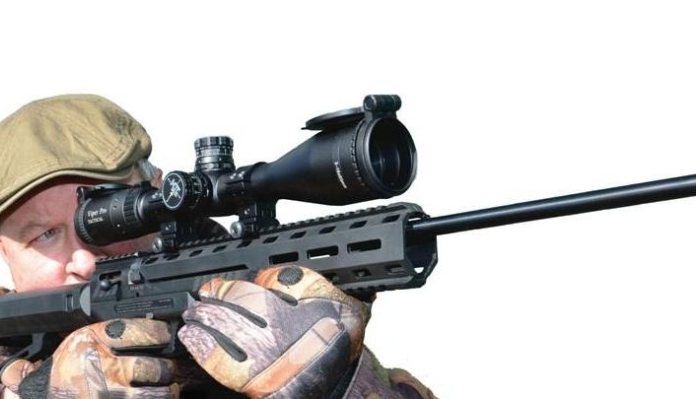 Rewind back to the Great British Shooting Show 2020, and little did we realize how this fantastic day out was to be our last such event for some time! It was there, that I first got a sneaky preview on the Highland Outdoors stand of the Webley Nemesis X. Prototypes are always exciting, and I remember thinking what a clever concept it was.

Well here it is - the Webley Nemesis X. It made the transition into production and it really is a neat airgun if ever I saw one. The clever bit is how the designers have built upon the success of the CO2 powered Webley Nemesis pistol, by incorporating the pistol chassis into a full-length rifle version. Look to the centre of this rifle and you can see the evolved pistol chassis, around which other components sit, and it really works well. With its militaristic, black tactical profile, it will find many fans, for looks alone, but look at the features on offer and it’s clear there is much more to this tasty little Webley than macho styling.

Bought as a combination kit, it comes complete with scope, mounts and a QGS4 sound moderator, but my test rifle was the ‘gun only’option, in .22 calibre. The steel barrel is pretty long at over 20” and it’s threaded at the muzzle, ready to take a moderator of your choice. Picatinny rails feature heavily, there’s a 2-stage trigger, tandem magazine, single-shot tray, interchangeable bolt action and even storage in the grip.

As for the construction, at several points whilst I’ve had this model on loan for test, I have had to doublecheck the exterior, for the rear stock and front forend frame, both have the look and feel of metal, yet are just very precisely moulded, dense, synthetic compound. It’s a great piece of work and of course, because they are moulded components, weight is kept down to just 4.4lbs!

Ambidextrous styling keeps everyone happy, and couple with that previously listed, interchangeable cocking bolt, ease of use is a given. It can be unscrewed and attached to the opposite side, switching the operation in a trice! Again, neatly executed and a great feature. Those extensive Picatinny rails run the full length of the forend, top and bottom, so the mounting options, for both sighting systems and accessories, is huge. Fancy a big scope on top, then no problem, but you will need the appropriate mounts. Likewise, a laser or a bipod can be added to the lower deck, bringing bags of versatility to this distinctive gun.

Power to the people

So, let’s talk CO2! Where the relaunched Nemesis pistol derived power from a single 12-gram CO2 capsule, hidden in the grip, this new Nemesis X rifle draws on a significantly larger gas supply, in the form of an 88-gram CO2 cylinder, this time stored inside the removable butt. UK distributors, Highland Outdoors also supply an adaptor (available from their dealer network), which will allow for two 12-gram CO2 capsules to be loaded on board, end to end. But for maximum shot reserves, this model is primarily intended to take the larger 88-gram tanks. To load one of these, the rear stock first needs to be removed and this is a little awkward at first until an obvious routine is adopted. First, hold the pistol grip in the right hand and at the same time use the left to depress the sprung button located near to the connection point between the butt and the action, then pull the rear stock clear. A new cylinder can now be screwed into place, and it pays to twist the thread quickly at the end, so as not to let too much gas escape before everything locks into place. Replace the stock until it clicks home, then you’re ready.

The Nemesis X is supplied with a neat single-shot tray, which just drops into the breech void from the top, once the bolt is withdrawn. However, with the tandem double magazine also included, it seems rude not to, as they say. Both accessories can be neatly stored inside the pistol grip, which is a nice touch. Just push and slide and the base comes away, with the idea being that you keep safe what you’re not using.

The tandem magazine is a really neat idea and offers two rotary drums, side by side. The end result is conveniently low profile; so much so, it stays below the height of the scope rail. Filling is very easy - just drop pellets headfirst into each chamber, through the clear lid on each side. There seems a little confusion over the mag spec, as my rifle came supplied with a twin 6-shot configuration (12-shots in all), whereas I have seen this gun featuring a twin 7-shot setup. Either way, the system works beautifully. Cock the bolt and push the magazine into its slot from the right-hand side, then push home the bolt and you’re primed to go. I love how the mag snaps into place. Yes, you need to keep count but when the mag is empty, just whip it out, switch it around, reposition it in its slot, and go again. Cycling the bolt is fairly effortless as well as smooth and with a fair old crack from the expanding gas on firing, there’s a fun sensation for sure.

It’s worth bearing in mind that CO2, as a power source, can suffer from fluctuations in velocity, depending on temperature. If you shoot in super cold conditions, then you’ll find that the shot count is reduced and that velocity may dip. CO2 capsules also add additional cost, with the standard 12-gram ones being around 80p - £1.00 and the big 88s coming in at £5.00 - £8.00 a pop. Part of the attraction, of course, is the fast-fire action, and effortless power on tap thereafter!

Undoubtedly, the emphasis is on fun shooting, and it really pays to have a barrel cleaning rod set to hand, for the inevitable barrel blockage. Firing CO2 until the end of the charge means that a few shots will suddenly drop in power. This can be quite marked at the end of the power supply, and at that point, a pellet or two may become lodged in the barrel, as there simply isn’t enough juice for propulsion. A quick rod-through means the spent pellets can be removed and normal service can be resumed.

Fun is the recurring theme with the Nemesis X and whilst chronograph figures aren’t so vital with this type of airgun, it’s nice to know what to expect. From the sizeable 88- gram CO2 cylinder, expect a fairly impressive shot count of between 150-200 shots, dependent upon temperature and pellets used.

As for energy levels, my test rifle produced 9-10 ft/lbs at certain points along the power curve. As the onboard power reserves decrease, so velocities taper off, and this can be quite marked. CO2 power is, therefore, best appreciated as an opening to effortless shooting, rather than reliable precision. That said, using .22 Air Arms Diabolo Field pellets, I managed highly competent groups of just over 1” C-T-C at 25 yards during testing, so there’s plenty of reward for good technique, to complement the neat functioning magazine, feel and overall handling.

A recurring word that keeps coming to mind when in the company of the Nemesis X, is ‘satisfying’, and that’s all credit to the designers of this great value Webley. Satisfying build quality, coupled with a fulfilling level of performance and functionality. Add in a unique feel and plenty of well thought out features and you get the picture! In short, plinking good fun!