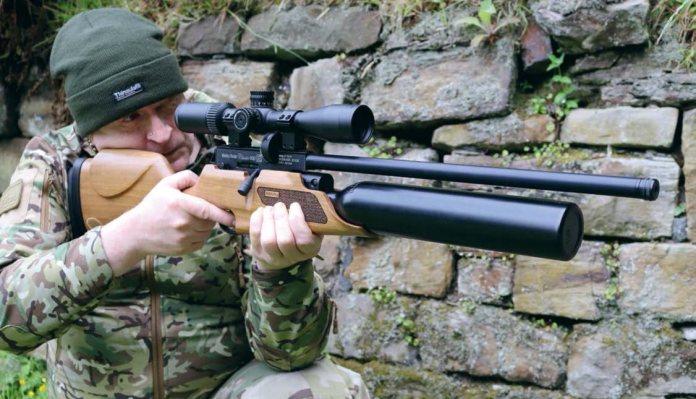 The Raider has again undergone some feature changes and one is a part of the gun you immediately notice. Like many PCP rifles, this model of the Raider uses a fixed, large capacity buddy bottle. A blacked steel 500cc bottle to be exact. The other feature of note is the design of the stock, which has been thoughtfully modified to accommodate the change in air supply and to ensure you still have a solid and surprisingly ergonomic handle to hold.

Welcome to the family

Joining the family, so to speak, is the Webley Raider Classic 500 and it’s going to be a hit with shooters who prefer a buddy bottle for air storage and a rifle capable of holding enough compressed air to give a high shot count per fill.

The 500 boasts a well-grained, mid-to-light brown ambidextrous Turkish walnut stock. It’s hardly surprising this wood should be used given the rifle’s country of origin.

It features a well-defined high cheekpiece with a sliding height adjustable black rubber butt pad. It has quite a slim neck with a steep dropdown pistol grip, which has a generous palm swell. Neatly incorporated into the stock is a slight thumb channel/ shelf that extends all the way up the rear of the action thanks to a tapered plastic end cap at the back.

The forend is relatively short to accommodate the front-mounted buddy bottle but is nicely crafted to offer a variety of holds, without you having to touch the cold metal of the bottle.

Just forward of the metal trigger guard, the woodwork is very deep and slab-sided. The wood almost reaching down to begin its journey forward at the same level as the trigger guard. It’s also here you’ll find a short run of finger grooves on either side that run along the lower section (approximately at trigger height) from the metal trigger guard to the lower section of the highly cosmetic grip panels found on either side of the forend. These are very well set out as they don’t clash or interfere with the other grip aids. Also, the forend runs under the bottle giving the neck protection and providing extra wood for a flat leading hand hold

The rifle takes a recommended/ maximum fill of 250bar and returns over 200 full power shots in .177 and over 250 in .22 calibre. The manufacturers have designed quite a unique method to fill the buddy bottle as, unlike its predecessors, the insert probe doesn’t enter a hole on the underside of the rifle. Rather, there’s a through and through inlet port positioned just above the buddy bottle, but in the lower part of the action. When not in use it’s protected by a friction-fit insert plug, which requires pushing out to one side or the other. This can be done from either side by using the fill adaptor itself.

The fill procedure works a treat and to keep a check on the air in the bottle there’s a deeply recessed, colour highlighted air gauge in the underside of the stock’s forend. All neat, tidy and very efficient!

The action is run by a chunky sidecocking bolt that once lifted up and pulled fully rearward, allows the Perspex fronted magazine to be slid out from the right-hand side of the action. The bolt does take a bit of heft to pull back to its full rearward position, which is something I’ve found with all the more recent models of Raider I’ve tested. However, I’m told this is a nuance of the mechanism that was originally designed for FAC-rated models and once you get used to it – it’s not a problem. Incidentally, the rifle also comes supplied with two magazines and a single-shot loading tray.

The magazine is of a friction fit design. Having said that, when slid in it also houses around a protruding barrel collar at the breech, so it’s definitely held very securely in position. Alternatively, the single-shot loading tray is a clip-over design that neatly slips over the barrel collar to secure it in place, which also ensures the loading channel of the tray sits in perfect alignment with the breech.

The removable magazine is again a familiar design but holds 12 pellets in .22 calibre and 14 in .177. To load the self-actuating magazine, you first need to rotate the clear face plate anti-clockwise against spring tension until it comes to a natural stop. Then, while keeping the cover in this position, you reverse the magazine, so the back faces towards you and then load the first pellet skirt first into the exposed empty chamber. Next, turn the magazine back around so the cover plate is facing you again and as you let this clear cover return to its original position, you load pellets into the rest of the empty chambers as normal (head first). Once the magazine is filled, it can be placed/pushed back into the right-hand side of the action and the bolt returned to the closed position.

For scope fitting, machined across the top of the aluminium action block is not one but two scope rails. This is because there are two specifications of scope rail available, one being a Weaver/Picatinny type and the other the familiar 11mm dovetail. The latter is slightly raised and runs along the centre of the Picatinny rail. Obviously, this gives two types of mounting base but in either case, the magazine does protrude quite high from the action.

The rifle came ready scoped up with a ZeroTech Vengeance 4.5-18x40 optic. I mention the scope because Highland Outdoors, which distributes Webley, also now handle this Australian optics brand for the UK market. It’s a side focus model with push-up and push-down lockable turrets and it’s in the Best on Test section of this issue. It was also fitted in a pair of Nikko Stirling high 1” mounts. These were required to clear the tall magazine protruding from the action and another accessory that displayed good quality.

The 2-stage adjustable trigger has a broad face and a nicely contoured blade, plus has a manual lever-type safety catch on the right-hand side of the action, positioned directly above. Rear for SAFE and forward for FIRE. At this point a large red dot can be seen on the action, thus visually indicating the rifle is now ready to fire. Right-handers can easily operate the mechanism with the thumb of the shooting hand.

In use, the trigger releases the shot very cleanly and the safety lever is very positive in operation. Also, the configuration of the pistol grip makes a fine platform for aiding precise trigger control.

I zeroed the rifle for 30 yards and using H&N FT pellets, the rifle was soon producing sub ½” groupings at this range. I pushed out further and the groups only slightly opened up with the odd flyer. If you choose your ammo wisely, then the rifle will demonstrate very high accuracy.

Incidentally, the free-floating barrel is quite chunky in diameter, so will I’m sure handle any slight knocks it might receive during use. It’s also quite a quiet rifle on discharge but it’s good to see the barrel is ½” UNF screwcut for taking a moderator of your choice. If you choose to not fit a silencer, the threads are well protected by quite a stylish screw-on metal cover cap.

Despite my observations of the operation of the cocking bolt, the Webley Raider Classic 500 has an abundance of appealing features. It’s not the lightest gun, but despite having that humungous buddy bottle upfront, Webley has managed to make an adult-sized rifle that’s very manageable and handles spot on. All credit has to go to the stock design as it allows the bottle to flow into the overall aesthetics of the gun.

The Raider Classic 500 is now the flagship Webley PCP. However, it’s still a very affordable airgun, and considering what you’re getting in terms of performance, it’s a very attractive and appealing choice for those who like their guns substantial, reliable, accurate and with a high shot count.