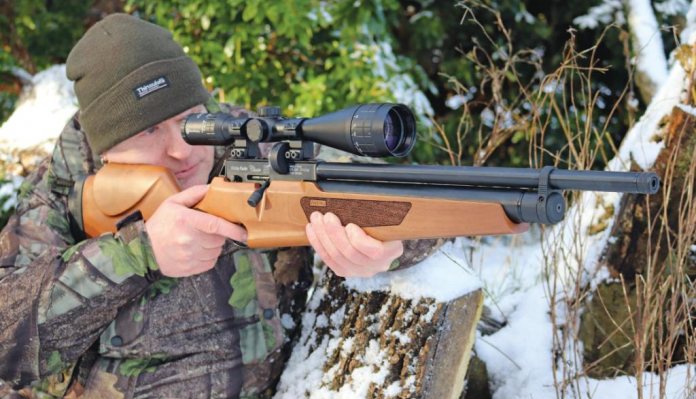 Although British gun manufacturers Webley closed their doors many years ago, the brand name carries on thanks to Highland Outdoors. Since then, they’ve done a fine job in sourcing overseas manufactured goods that are of a quality that deserves to display the famous winged pellet logo. The latest is the Raider, the name alone has a long association with the original manufacturers as they once produced a few variants of what was originally quite a unique double-shot PCP air rifle.

That was then this is now

When Highland took ownership of the brand, the Webley Raider was first launched as a 10-shot PCP with an ‘XS’ denotation. They briefly dallied with a 12-shot variant until arriving at what we have now; the Raider Classic. At present, it’s available in two formats, the standard model or a full barrel shrouded variant known as the Raider Quantum Classic. The clue to the main feature of this rifle is in the extended name, as it is prefitted with the company’s own Quantum Silencer.

As Webley airguns are manufactured in Turkey, it only stands to reason that the woodwork should be of a type that the country is known for. In this case, the rifle has a subtle but quite stylish, grained, mid to light brown coloured, ambidextrous Turkish walnut stock. It features a well-defined high cheekpiece with a sliding height-adjustable rubber butt pad. While the aft section is quite thickset, it does give way to a slim neck with a steep drop-down pistol grip that includes a palm swell. Neatly incorporated into the stock is a thumb channel, which extends all the way up the rear of the action block thanks to a tapered plastic end cap at the back.

At the forend, the rifle again shows how substantial the whole stock design actually is, yet is also quite slim. Just forward of the metal trigger guard, the woodwork is very deep and slab-sided, almost reaching down to begin its journey forward at the same level as the trigger guard, to then taper up to end with a slightly angled back tip. It also has a short run of finger grooves on either side that go from the trigger guard area to the lower section of the grip panels.

Both forend and grip have deep-cut panels of chequering that are set out as two block shape panels on either side of the grip, plus one elongated panel either side of the fore section. A nice touch is the Webley name crafted into the top of both panels, helping give a more distinctive branded look. The forend also has a nicely rounded underside, and overall, the stock is in keeping with this compact air rifle.

The rifle is charged via a probe that slips into a side fill point located at the front of the air reservoir. When not in use, it is covered by an integral rotating front collar. Here you will also notice a solid looking ABS barrel band, designed to help prevent loss of zero due to potential knocks the shrouded barrel might incur in the field or during transit.

As you’d expect of a modern PCP air rifle, it also has a colour enhanced air gauge very deeply recessed into the underside of the forend.

Roll out the barrel

The action is run by a chunky cocking bolt, that once lifted up and pulled fully rearward, allows the Perspex fronted magazine to be slid out from the righthand side of the action. I must mention two specific nuances of the rifle that immediately become apparent at this point. The bolt does take a bit of heft to pull back to its full rearward locking position, plus the magazine is quite tight in its housing. This might just have been the test gun, but the rifle comes with two magazines plus a single-shot loading tray.

Both magazines took some

strength to slide into position. However, as there’s no dedicated magazine locking system, the mag has to be a friction fit design. Having said that, when slid in, it also fits around a protruding barrel collar at the breech, so, it’s definitely held very securely in position. The single-shot loading tray is a clip over design that neatly slips over the barrel collar to secure in place. This also ensures the loading channel of the tray sits in perfect alignment to the breech.

The removable magazine is again a familiar design, it holds 12 pellets in .22 calibre and 14 in .177. To load the self-actuating magazine, you first need to rotate the clear faceplate anticlockwise against spring tension until it comes to a natural stop. While keeping the cover in this position, you need to reverse the magazine, so the back faces towards you, then load the first pellet ‘skirt first’ into the exposed empty chamber. Once this is done, turn the mag back around so the cover plate is facing you again, as you let this clear cover return to its original position you load pellets into the rest of the empty chambers ‘head first’ as they present themselves.

For scope fitting, machined across the top of the aluminium action is not one, but two scope rails. One is a Weaver/Picatinny type, and the other is a standard 11mm dovetail. The latter is slightly raised and runs along the centre of the Pic rail. Obviously, this gives two types of mounting base, but due to the magazine sitting quite high from the action I opted for a pair of Sportsmatch extra high dovetail base mounts. These gave me enough clearance so that the body tube of the Nikko Stirling Panamax 6-18x50 AO IR optic I fitted, wouldn’t foul on the magazine.

The 2-stage adjustable trigger has a broad face and nicely contoured blade plus there is a manual lever-type safety catch on the right-hand side of the action, positioned directly above. Operation is simple, Rear for SAFE and forward for FIRE. Right-handers can easily operate the mechanism with the thumb of the shooting hand. In use, the trigger releases the shot very cleanly and the safety lever is very positive in operation. Also, the configuration of the pistol grip makes a fine platform for aiding precise trigger control.

Now to the Quantum Silencer, which gives the rifle a very stylish and modern appearance. Internally, it uses a combination of air rifle, rimfire and centrefire moderator technology. To be specific, the moderator’s first chamber is designed to back reflex excess air from behind the pellet into the cavity and silencer wall. This slows down air following the exiting pellet without loss of power, which in turn helps reduce sound. The remaining chambers incorporate various baffles and acoustic felt cages that absorb any build-up of pressure whilst the pellet travels through. The unit will suit many hunters as it’s very efficient for general situations.

However, if you want total hush, then you’ll be pleased to note the very front of the shroud has a ½” UNF thread (metal thread protector included) for attaching a moderator of your choice. I tried several of my favourites and all of them totally negated muzzle report, thus turning the Raider Quantum Classic into one of the quietest hunting PCP’s on the market.

Despite my observations regarding the operation of the cocking bolt and the tightness of the magazine, the Webley Raider Quantum Classic has a lot of appeal. It’s surprisingly light, handles well with either a big or small optic on board and is host to a very good trigger mechanism.

Considering the sub £500 price tag, you’re looking at a multi-shot PCP air rifle that’ll suit hunters that are new to the power source and/or older hands looking for a second rifle or alternative calibre to the one they mainly use.