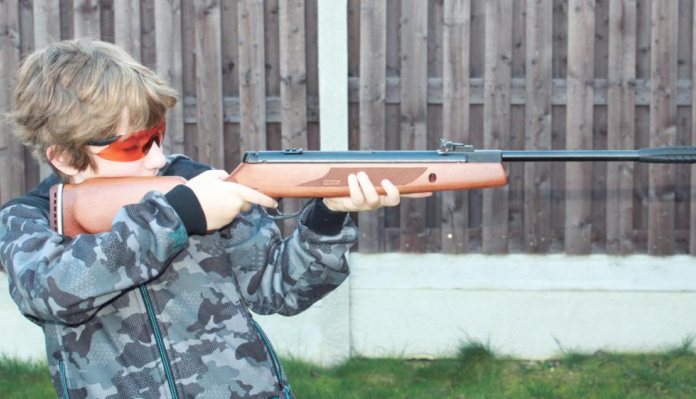 Getting new shooters into the sport is vital for it to continue and grow. Thankfully, airgun manufacturers know this and now make smaller, starter type rifles for discerning parents to purchase for their budding marksmen and women. You cannot go wrong with starting a new shooter out on a break barrel spring powered air rifle. They are relatively cheap, normally they come fitted with open sights and an optical sight rail. Open sights are very useful, as it enables them to be taught how to use the first aiming device stepping stone, to enable them to hit their target. Please don’t dismiss open sights as old hat; they are fundamental to any type of shooting.

Webley are a responsible, well-renowned firm, with a long and very proud history. Their VMX Cub spring rifle is squarely aimed at providing a quality airgun to facilitate new shooters. It’s obvious that there are elements in its design that cater to the specific requirements of juniors and it’s based upon the Webley VMX adult air rifle. I like the name as well; calling it the Cub brings to mind a bear cub beginning their journey into bear-hood by being taught how to hunt by their parents.

To start with, the power level has been de-rated on the VMX Cub to 7.50-Joules or 6ft/lbs, this has two advantages for beginners. As a break barrel rifle, it makes it easier to cock the action and also makes the firing cycle less harsh. Having the less harsh recoil makes the WMX Cub potentially massively more accurate at the short ranges a new shooter should be shooting at. It’s a big mistake to give a new shooter a 12ft/ lbs air gun and try to get them to knock over 55-yard FT targets. It’s all about making it easy and fun for them, as well as being safe, of course.

The VMX Cub has an anti-bear trap device and this prevents the barrel from springing up if left in the open position and the trigger operates, and the system prevents this totally. I would say that the barrel should never, ever be left to dangle, the cocking hand on the end of the barrel stays there through all the cocking/loading process, until the job is done. The Cub also has an automatic safety catch, which sets to safe upon cocking the action. This has to be manually taken off in order to allow the trigger to be operated and the rifle fired.

Webley want as many juniors as possible to be able to shoot the VMX Cub; with this in mind, they have made the wooden stock ambidextrous, so that left or right-handed people can use it. To cater for the smaller frames of junior shooters, the pull length of the stock has been decreased to 322mm, by taking off around 50mm compared to an adult sized airgun it makes the rifle easier to shoot for little people and puts their head in a more comfortable upright position. Keeping with the hardwood stock, it has laser cut grip panels cut into both sides of the forend and also on the pistol grip sides, the side panel’s also have the word ‘Webley’ cut into the base of each one. It is fitted with a ventilated recoil butt pad, for comfort and to give the grippiness to keep the rifle in the correct position on the shooter’s shoulder. A modern feature is also the angled front stock securing screws, which prevent them loosening off under recoil. Even with a small stock I found as a six-footer that I could still comfortably shoot the VMX Cub.

The open sights on the Webley are bang up to date, with coloured, high visibility fibre optic rods being fitted to both the front post and rear notch sights. The rear sight has micro adjustable wheels for both windage and elevation. The front sight is part of a 140mm long molded section. A 14mm long 1.4mm diameter red coloured fibre optic rod forms the front post. This stands out very well when shooting outdoors; 385mm back from that is the rear sight. There are single green rods showing up as green dots each side of the 2mm wide notch. The click adjustments are crisp and the steel elevation wheel has 0 to 9 markings. A small R and L with an arrow assists the shooter to zero the Cub.

The barrel hinge pin is adjustable for tightness, a good design element to future-proof the VMX. The barrel lock is not too hard to break for a smaller shooter too; the barrel is only 430mm long but the extended molded plastic section behind the fore sight gives the shooter a more comfortable area to flat palm hit the barrel to break the initial lockup. The gun’s action was easy to break in that respect. Over the chronograph, with 7.9-grain pellets, it ran in at 533fps or 5ft/lbs, perfect for back yard use. Regular sized VMX rifles run at 11.5ft/lbs. Webley call their VMX power system “Powr-Lok” and it’s etched on the steel cylinder. The de-rating of the power is achieved by using a shorter cocking stroke, the Cub’s barrel only comes to approximately 92-degrees at the end of the cocking stroke. The trigger blade is pressed steel and has a pronounced curve.

The safety catch is situated at the very rear of the action and, as such, is ambidextrous, opening it up to more potential shooters. The safety catch automatically pops out upon cocking the rifle, to place it in the safe mode. The safety catch is pushed back into the action to move it to the fire position. This also shows a red dot now on either side of the rifle. The safety can be re-set at any time by pushing it in or getting hold of the curved sections on both sides and pulling it out onto safe again.

The trigger pull came in at 1.85kg on my electronic trigger gauge and was two stage in operation. The rifled steel barrel is good and it’s an accurate little gun, even using the open sights. If you want to fit optical sights at a later date, the gun has a 100mm long, 11mm wide dovetail rail machined into the top of the steel cylinder. At the back of this is a recoil block, consisting of a pressed steel plate. The sight mounts fit up to the front of this to stop any movement of the sight under the influence of the spring recoil, a common issue with recoiling spring powered rifles.

George, my eleven-year-old son liked the Cub a lot. He found it easier to cock than some other so, called junior rifles we have shot together. The VMX Cub has a massive amount going for it as a starter rifle, including the price, great job Webley!

Many thanks to Ryan for the help in production of this article.