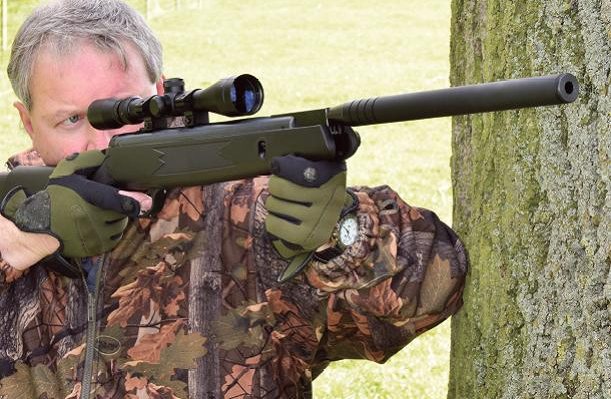 When I tested a Webley ValueMax a few years back, I was very impressed with the genuine nononsense specification, and the inherent accuracy of the thing. Well, on test here is effectively the latest version, renamed the VMX. The test model is the Webley VMX OS Quantum, and it’s a good old traditional break-barrel model, with a few modern upgrades.

The synthetic stock is the obvious eye catcher, but it also comes fitted with that snazzy full-length barrel shroud, that incorporates sound suppressing features within the body tube. It’s certainly reasonably priced, so let’s see how this latest incarnation shapes up on test.

Synthetic stocks are comparatively cheap to make, so help keep production costs down, but their ultra-robust knock-about qualities also make them highly practical for many shooters, who just see the gun as a tool to do a job. The VMX OS Quantum is a full-sized adult airgun, yet given its inherent light weight, it can be equally suited to younger shooters and novices alike. The moulded pistol grip is quite thick, but a well proportioned forend and defined cheekpiece lends this model a purposeful profile. The rear section is hollow in places, which can slightly increase noise resonance, but the rough textured feel, works well. My only criticism concerns the breech jaws, which are just a little sharp to the touch on the inside edges.

This Webley uses an arrestor block plate on the scope rail and it works well. A picky assessment would conclude that it could be fitted further to the rear of the cylinder, so as not to waste valuable space on the scope rails, but as it stands, it does the job. Indeed, fix the rear scope mount right up against it, and the age-old problem of scope creep is all but eliminated. I had an AGS VMX 3-9x40 scope to play with for the test (available as an extra), and this shaped up well as basic glassware, and good value at only £46.99.

Given this model’s highly competitive RRP, it’s clearly produced to a price, and build quality reflects this somewhat.

The chemical bluing on the barrel and main cylinder is slightly rough and a little dull compared to some rivals. That said, the full-length, anodised silencer (or ‘over-sleeve’ as the manufacturers call it) has a really class feel to it, and with an adjustable breech bolt and keeper/locking screw all part of the breech lock-up, there’s plenty of attention to detail where it really matters.

There’s a real basic appeal to this gun that I warmed to on test. Pick it up, and that straight line grip just gives the VMX a point and shoot simplicity. Fully ambidextrous, it does mean that the configuration is suitable for most shooters, although that pistol grip could do with being just a tad thinner, for a more relaxed hold. Those rough edges inside the forend are slightly irritating, but overall it’s difficult not to be impressed once you see what this gun can do.

A small jolt is required to open the Webley’s firmly sprung breech detent, but once achieved, the Venominspired internals make their presence felt; with a super smooth cocking stroke, free of spring ‘graunch’. The breech locks up in a reassuring way too, and the whole operation is made that bit easier courtesy of that sizeable silencer. Consider that super short 10-inch barrel, and you’ll be thankful for the extra leverage.

As mentioned, Webley term their new Quantum shroud/ moderator (fashioned from hard anodised alloy) an ‘oversleeve’, and it’s an intriguing design. An initial chamber at the muzzle, vents back highpressure air into the cavity between barrel and sleeve. This slows down the air, and contributes to noise reduction. The pellet then passes through further expansion chambers, including mini cages and acoustic absorption material, that all help to strip away and dissipate spent air, to reduce that final muzzle report.

So does it work? Well, anyone who’s shot a carbine airgun with a super short 10-inch barrel, will know that it’s capable of generating a significant crack at the muzzle and in that respect there’s no doubt that the Quantum moderator does its job. Where spring power is concerned though, the noise from the mechanical action is the main problem, and that’s more difficult to eliminate. In other words, silencers, however effective, are only half the answer.

In the case of the VMX, the Powr Lok mainspring and guide (again Venom inspired features), certainly ensure very smooth power delivery. The trigger is fairly basic, but the blade is wide and nicely curved, and in the case of my test gun, was set to release without much effort; albeit with a small amount of creep. There is an automatic safety catch at the rear, neatly made in the style of Webley’s famous old Omega model, but for the record, it isn’t possible to decock the action without firing.

On test, the Webley VMX proved superbly consistent with a variety of ammunition, recording a ten shot string with a total spread of 13fps with SMK Black Domes, and an amazing 4fps with RWS Superfields. Energy levels, for the record, came in at an average 11.2ft/ lbs with both pellet brands, which is textbook performance.

As for down range accuracy, the VMX produced super tight clusters with several pellet brands, over 25-yards on test; the best of which was RWS Superfields, posting 3/8- inch (10mm) groups c-t-c.

Best summed up as simple and highly effective, whether sourced as a beginner’s gun, or generalpurpose workhorse, this Webley VMX OS Quantum proved to be a very enjoyable gun to shoot. Lightweight, pointable, relatively easy to cock, super consistent, and, all importantly, highly accurate – what’s not to like?