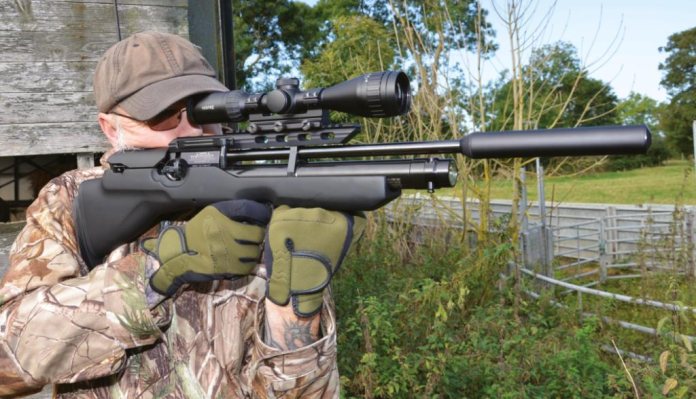 Too late for the party, but are Weihrauch about to upset their rivals with their latest offering? Only time will tell. But one things for sure, their brand new HW100 BP is an eye catching piece of hardware, that demands to be noticed.

Introducing a new product for such a traditional manufacturer as Weihrauch, is no casual step, and when the target market is an area as unusual as Bullpups, there’s an understandable reticence to jump in too early. Kral, Daystate, Brocock, Hatsan, Cometa, FX, Webley, Jkhan, and Walther, are just some of the big names to have thrown their hats in this ring. Air Arms and BSA have also followed suit, with their own pups.

Not to everyone’s taste, but for Weihrauch to sit back and seemingly ignore this ever more popular sector of the market, was becoming a less viable position by the day. Action clearly needed to be taken, and the HW100 BP was the result. They had great success with their first PCP, the HW100, so to base their first Bullpup on this action makes a lot of sense.

We are not talking a blank piece of paper, as it uses the proven HW100 action. But it’s not a case as some manufacturers of dropping a standard rifle into BP furniture, as there are necessary differences and modifications. So, to all intents and purposes, it’s a brand new model in its own right.

Firstly, with the action set almost to the rear of the stock, the scope needs to be mounted on the high rise ‘intermount’ rail, machined and positioned above the barrel. The trigger is classic Weihrauch, as in a subtle, 2-stage unit, yet here, with the layout, a remote linkage is mandatory, to connect the mid-positioned pistol grip to the rear mounted mechanism. Of course, the stock is a bold, ambidextrous design, and a radical departure from anything they have produced to date. Add an in-house silencer as standard, quick fill probe charging, 2 x 14-shot magazines and a manual, ambidextrous safety catch. Plus, their own barrel, regulated action, new side-lever and an adjustable butt pad, and we have the makings of something quite intriguing.

So, given how it dominates the looks, let’s start with that radically styled stock.

Weihrauch have introduced synthetic furniture into their extensive product line-up, but this HW100 BP actually utilises wood (beech) that has been coated in a Soft Touch black rubber compound, like their HW110 PCP. The end result feels superbly cosy to the touch. The separate cheek piece is black plastic and shields the face from contact with the action, whilst the pistol grip is a further synthetic moulding, including the integral trigger guard. Making this component separate means it stays strong, rather than a weak point of the stock. Plus, the quality of the moulding, coupled with that superbly contoured yet ambidextrous grip, means it feels sophisticated in use. Indeed, look closely, and it looks the same as the grip used on the company’s HW44 pistol, which is a clever move.

Looking to the action, the large block above the breech, houses the slick side-lever and also forms the intermount, which offers an extensive length of Picatinny rail fixed to the barrel support. Maybe a bit overkill for a recoilless PCP, but the added security of the transverse slots that engage with the lugs in most modern scope rings are no bad thing in this day and age. Let’s face it, overt military styling is all part of the appeal of this type of gun. However, clever design means the rail section can actually be unscrewed and removed, and the dovetails beneath utilised. Not sure why you would, but it takes all sorts.

Weihrauch run their barrel through an O-ring within the support, but I know from experience that some shooters may opt to dispense with this feature, in order to allow the barrel to free-float. Perhaps a psychological advantage, perceived if nothing else. Finish to all the metalwork on my test gun was exemplary, with the matt anodising of the mount contrasting nicely with the rich chemical bluing and gloss of the barrel and action.

Preparation starts with setting the butt pad correctly, something not to be rushed. The idea is to get eye/ scope alignment just right, where the gun automatically comes up with the full scope image easily achieved, with no straining and muscle effort. Mount the gun and see how it all feels, then, using the Allen key provided, gently slacken the bolt in the rear of the pad, to allow the butt assembly to slide up or down. With trial and error, you should arrive at the optimum setting, where the head is supported correctly. Lock up the bolt, and you’re ready.

Charging the ‘BP’ is simple too. Remove the nylon plug in the front valve (classic Weihrauch PCP-style). Push the airline complete with adaptor probe supplied, into the valve, and slowly fill the cylinder to the stated 200bar. Bleed the line, remove the probe, and replace the plug in the valve to keep out dirt.

With ostensibly the HW100 internals onboard, the good news is that we get a 14-shot, rotary, magazine to play with, and Weihrauch’s design is both super robust and reassuring in build. Just push pellets head first into each chamber, making sure they sit perfectly flush, then pull back the cocking lever all the way, pull back the mag retaining clip, insert the drum into its slot within the action, push the clip forwards (this may need a little bit of jiggling of the mag at the same time, then close the lever. The first shot is now ready.

Pick up the HW100 BP, and the integrity of the design begins to make itself apparent. That said, whilst the forend is nicely shaped, I would still prefer a couple more inches, just to give more options in the aim, although admittedly I do resemble one of the earlier specimens in Darwin’s line up! As it stands, I was fairly comfortable in a variety of positions. As for having the face so near to the breech, I still find this aspect of Bullpup ownership a mite concerning, yet it’s par for the course if you opt for this style of airgun.

Handling overall though, is pretty good, and Weihrauch’s clever grip configuration, filling the palm either way, manages to be all things to all people, with little noticeable compromise. Cycling the slick side lever is a pleasure, and once the magazine retaining clip is locked, the user is assured of hitch free operation. For south paws, actions can be supplied with the cocking lever on the left, so yet more evidence of Weihrauch’s forward thinking. One trick they missed was not positioning the safety within the pistol grip, as reaching back for that tiny, rear-mounted catch is not the best location for any Bullpup!

However, it’s the overall package coming together, that makes shooting a modern Weihrauch pneumatic such a pleasurable experience. The sweet operation of the 2-stage trigger is an achievement too, given that the Bullpup confi guration necessitates the use of a remote linkage. Add in the regulated action, and their own renowned silencer and the result is a satisfyingly muted, slick and refi ned shot delivery. That extremely effective unit is threaded ½ x 20” UNF, so can be easily removed if necessary.

So, how did this all stack up in terms of performance? Well, all I can say is that recorded figures all round, were best described as ‘textbook’. Chronograph testing was carried out using the Weihrauch FT Exact Jumbo pellets, as supplied by the UK importers, Hull Cartridge; and here, ten magazines were duly emptied, before residual pressure dropped to a level quite near to the green zone on the gauge - 110bar for the record. At this point, I played it safe, and called a halt. The 14-shot mag means I had blasted through 140 shots, which as it happens, is bang on what Weihrauch claim for the full length model specifi cation, as tested. And let’s face it, that’s a very usable number. Opt for the .177, and you can expect around 110 shots.

Opt for the HW100BP K, carbine version, and you can expect 75 and 50 shots respectively, which is still impressive from such a short cylinder. (It’s 1lb lighter but the super short forend would be too short for my build, so try before you buy). Accuracy wise, tight clusters were easy to come by with a variety of pellets, including Weihrauch’s own FT Exact Jumbo (.22 calibre), made by JSB; although Air Arms Diabolo just pipped these in fi nal down range performance, managing 5/16” (8mm) over 40 yards, which is pretty damned impressive in anyone’s book.

Bullpups always divide opinion, as they are a radical departure from traditionally configured air rifles, and simply won’t be everyone’s cup of tea. That said, if you do fancy investing in some hardware along these lines, then I can’t do anything other than whole heartedly endorse this new HW100 BP. Weihrauch’s build quality and unique feel, are all part of the equation, and for many, that’s enough to seal the deal. But get past brand loyalty, and this model is a damn fine airgun in its own right; in my view, deservedly joining the class leaders at the top of the short list.