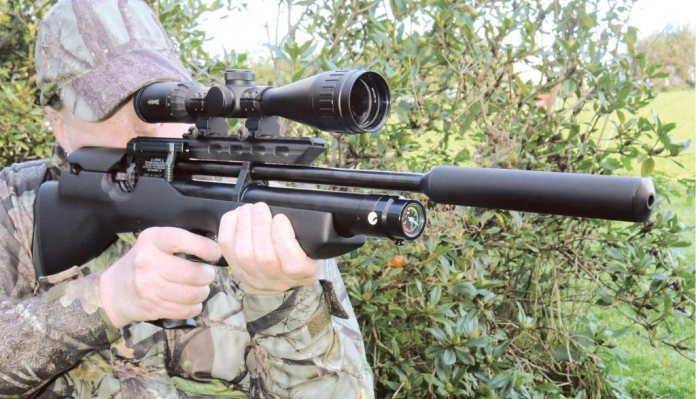 Considering bullpup air rifles are at an all-time high it’s little wonder that virtually every major airgun manufacturer has one to offer. So, not being a company to be left wanting and certainly never left behind Weihrauch have also entered the fray, but in quite an unexpected way due to the fact they now offer not one but actually two bullpups – the HW100BP and the HW100BP Karbine. They differ in basically only one area – that being the Karbine is much smaller, therefore has a smaller capacity air cylinder and tube, so be aware the shot count is drastically reduced should you require the shortest pup on the Weihrauch block. So, in that respect I’ve chosen to take a test drive with the HW100BP and it’s a very interesting trip as you’ll soon discover…

The stock stands out immediately as it’s obviously a very considered design that also dishes out some very tasty surprises. Firstly, Weihrauch have wisely chosen to opt for a soft-touch ambidextrous handle that features a black ABS cheekpiece fully covering the top and sides of the action block, plus a height adjustable full rubber buttpad. The aft section is also quite chunky at the top then is trimmed back at the lower portion and at the area to where it meets the shoulder pad. As you move forward it also has what can best be described as a ‘waist’ where it extends beneath the magazine housing to meet the full drop-down ABS combat style pistol grip. This grip is one of the most ergonomic and comfortable I’ve experienced on any comparable air rifle due to it having full finger ridging at the forward area plus hand-hugging contouring on all sides and rear.

The forend is very short and quite slim with a flat underside, which has two location holes already pre-threaded to accept the short run of Weaver/ Picatinny style accessory rail (which is supplied) should you choose to fit it or not.

Overall, I feel Weihrauch should be applauded for not following the trend of having an overly military styled bullpup – although the pistol grip does in part lean back to that theme.

I mention this because in the hold the rifle actually feels like an air rifle, more of an ultracarbine than bullpup, which is a very praiseworthy facet that’ll appeal to the many shooters amongst us (yes there are some) who have previously fought shy of bullpups.

High & low The HW100BP and Karbine version take a 200-bar fill - the standard BP returns 110 shots in .177 (as per rifle on test) and 140 in .22 calibre. Alternatively, the Karbine version I’m reliably informed offers 50 and 70 shots in the same respective calibres. So, as you can see, as I mentioned earlier shot count is a prime factor as well as overall size in deciding which pup to choose. Not surprisingly both have a forward-facing manometer (air gauge) at the very front of the air reservoir for keeping tabs on your air reserves and the fill point is protected from dirt and grime by a finger friendly and friction fit insert plug.

I’m sure it’ll come as no surprise that the HW100BP uses a sidelever to run the tried and trusted action that consists of the now familiar removable 14-shot big wheel shape magazine. However, the lever in this instance is of a drop- down handle biathlon design while all other functioning units of the multi-shot action are in essence the same as they are for other models of HW100 but in geographically different positions on the rifle itself. The magazine housing is at the rear top right-hand side of the action (positioned approximately mid-way along the butt section) with the serrated edge magazine retaining catch still positioned just behind the housing itself.

The operation of the action remains the same, that being to remove the 14-shot magazine, you first need to pull the sidelever to its fully rearward position of travel whereupon it locks securely in place. Then slide back the serrated outer edge magazine retaining catch, which allows the metal magazine to be easily lifted from its recessed housing. Fill all the empty chambers with the centre boss facing you and simply slot the magazine back into the action, push the retaining catch forward and close the lever. Hey presto, the rifle is now cocked and loaded. Weihrauch now machine an indicator on the outer edge of the magazine seen as a very narrow and shallow milled ‘silver’ slot. So even on dull days you can clearly see the indicator (if you wish to use it when placing the mag into the action), because it shows when it comes around again as a visual reminder of your ammo status. Even more of a plus is the ease and smoothness of operation because, once a shot has been fired, the sidelever effortlessly can be again cycled to cock the rifle which also indexes the magazine around to the next station and, upon returning to its closed position, probes another pellet directly into the semi-free-floating barrel.

Incidentally, a feature that’s a credit to the company, the mechanism has been designed so you can’t ‘double load’ the rifle no matter how many times you cycle the action!

All bullpups use a raised scope rail and unfortunately some are overly high which results in any scope mounted being high from the bore line of the barrel, so can cause problems with your pellet’s trajectory and therefore means you have to get used to this particular nuance of the design. However, the HW100BP has a much lower rail and cleverly gives two mounting options as the top forward section of Weaver/Picatinny rail is removable from the standard dovetails it secures to.

The Hawke Airmax 4 – 12 x 40AO AMX I opted to use sat nicely onboard in a pair of special base 2-Piece medium height Sportsmatch mounts. Upon the duration I had the rifle in my possession it proved a very suitable optic, though one of the latest Hawke Compact 30 Airmax offerings I feel would have made the perfect pairing.

The true trigger blade and unit (like all bullpups) is actually inside the butt section of the stock while the external trigger blade that operates – links up to it – is situated inside the rifle’s integral ABS trigger guard.

Considering Weihrauch are no strangers to producing award winning and highly acclaimed 2-stage adjustable trigger units then it should come as no surprise that this trigger and the way it operates is highly efficient and doesn’t feel that dissimilar to operating the true HW100 unit set behind. Wisely, they’ve used the same design of broad faced, wellcurved black anodised alloy blade while the trigger safety is positioned as it would be on the normal rifle (above the true trigger mech) though due to the re-positioning is found at the rear of the cheekpiece. A clever and thoughtful inclusion is that it’s an ambidextrous safety as there are identical levers on both sides of the stock.

Due to the design of the rifle allowing the fitting of a standard length HW100 carbine barrel and having the company’s HE (High Efficiency) silencer already spun onto the ½-inches UNF muzzle threads results in one thing – a very, very quiet rifle on discharge.

As for accuracy – no surprises the .177 calibre test rifle produced ragged pellet size groups out to 30-yards and pushing out to 40-yards returned grouping easily covered by a new penny piece!

The Weihrauch HW100BP may well be one of the latest to come to the party but is by far one of the best in relation to build, function and in-field practicality. The stock really does help it stand out from the pack and I must mention again it handles more in line with a conventional air rifle than a bullpup. I stress this trait of the rifle due to some pups tending to feel quite alien in the hold, so the shooter has to inadvertently adapt to the rifle. In this case the rifle behaves as it should - shouldering fast, easy and sitting solid and snug in the shoulder due to the height adjust butt pad. Also because of the overall design when suitably scoped up it handles and balances perfectly.

In fact, as I’m sure others have noticed, the HW100BP takes all the best features from certain other Weihrauch airguns, marries them together and manages to make them all work in perfect harmony. By this I refer to the stock material as used on the HW110, the pistol grip is virtually the spit of the one used for the HW44 PCP air pistol and let’s not forget the inclusion of an ambi-trigger safety – shades again of the HW110, but the mechanism is pure 100 in both looks and operation.

However, this isn’t the lightest of pups on the market, but it is the most easy and secure to hold given the ‘grippy’ nature of that soft touch over mould and that extremely comfortable and solid pistol grip that gives you total control for steering the gun and for operating the trigger.

Thanks to T & J. J McAvoy LTD for supplying rifle on test: guns.gb.com