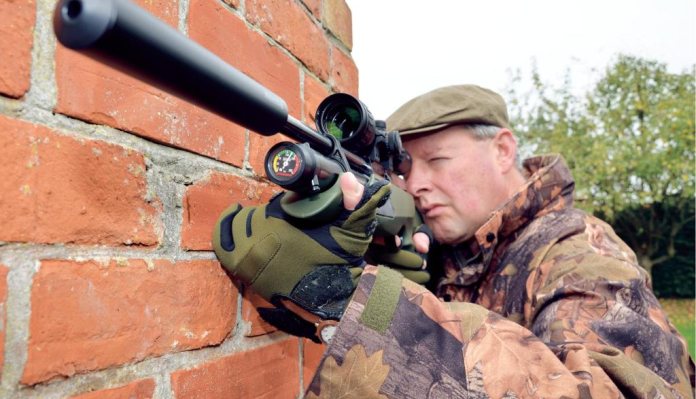 I try not to over-use certain clichés, but the expression ‘if it ain’t broke, don’t fix it’, does happen to perfectly sum up Weihrauch’s approach to their HW100 series. Admittedly, their all new HW110 ST took many by surprise, with its clever use of ballistic polymer for the breech block and other vital components; but their original range of pneumatics were simply too good to just sideline. So, the HW110 is more the perfect complement to the Weihrauch product range; an indication of the future perhaps, rather than a replacement for its more established stable mate.

Regardless of these youngsters, their first multi-shot PCP, the HW100, continues to win friends and fans around the globe, to the point where Weihrauch are forced to find ways of keeping the line-up original and fresh looking. A greater choice of stock options is of course the perfect answer, and that’s part of the thinking behind the brand-new synthetic models that have been launched by this highly respected German brand recently.

On show, here, is the HW100KT Synthetic, supplied in what Weihrauch call ‘Olive Drab’. OK; not the most inspiring of marketing labels, but having now got my mitts all over it, I must say it works rather well. Subtle grey soft rubber inserts are used on both sides of the forend and around the pistol grip, and the end result is a stock that instantly feels good in the shoulder. Looks pretty good too if you ask me; and if Olive Drab isn’t quite your thing, then how about Black with Grey soft inserts – the other option in this new line of furniture?

This Synthetic cladding helps keep heft manageable too, and in KT guise on test (denoting carbine thumbhole), an all-up weight of 7.5lbs seems very reasonable, for such a solid feeling action. Standard HW100 specification imported to the UK by official importers, Hull Cartridge, is the carbine length action, (.177 or .22) which means shorter barrel and cylinder. The full-length action can also be specified, but this is treated as a special order by Hull, along with a .20 calibre version. It’s just the way they do things and reflects the fact that their best-selling models over here, are of the more compact variety.

My test gun came supplied in .22 calibre, and the spec for those unfamiliar with this model, includes an adjustable rubber butt pad, 14-shot rotary magazine system (a spare is also included), sidelever, 2-stage trigger, probestyle charging, onboard manometer (air pressure gauge) Weihrauch’s own silencer, and a regulated action.

Pick up this model, and you instantly feel an air of quality as the Weihrauch pedigree is everywhere. From the high gloss, perfectly finished breech block, to the balance and sheer ‘pointability’ of the thing, this ‘100 derivative just oozes class. Traditionalists, and I would normally count myself among that group, may not appreciate synthetic furniture over the usual swirling grain of Weihrauch’s walnut fare, yet such is the execution of the project, that it’s really pretty hard to find fault in the end result. My only minor niggle being that the soft panels do seem to mark quite easily.

Weihrauch designed the HW100 series for the serious hunting fraternity, and with practicalities of the art, a big driving force for many in this sector, the inclusion of a totally weatherproofed stock, free from the potential vagaries of real wood, holds great appeal. I personally wouldn’t be caught soaking up sustained wet stuff of an evening, but if you do consider yourself an all-weather hunting pro, then the kit really should be able to resist the very worst of the elements. Take this

Weihrauch into the wilds, let Mother Nature do her worst for a few hours, and the stock at least should remain warp free, just needing a quick wipe down with a cloth. You’ll need to cosset the chemical blueing of course, but that furniture will take whatever you choose to throw at it!

An ever-increasing number of guns are being designed of late, to offer the shooter adjustable elements in order to maximise gun fit. To this end, the HW100KT Synthetic also includes an adjustable rubber butt-pad. Just insert an Allen key into the socket in the back of the rubber pad, slacken it off, and the pad can then be raised or lowered to suit. Adjust until the eye scope alignment is spot on, and then re-tighten the bolt.

Fitting a scope is an easy task with this model, and a feature worth noting is the pattern of grid lines that Weihrauch cleverly print on top of the breech block – meaning that a scope can be taken off if necessary, then easily replaced at a later date, in exactly the same position using the witness marks. A handy feature if you share scopes between guns for example.

Next, we need to fill the cylinder, and here it’s worth noting that it’s removable; a feature that I think should now be standard on all PCPs. Note, the cylinder is charged via a push probe system whilst in situ within the action, which is the ideal way to maintain zero etc. But the fact it is possible to easily remove the (screwon) reservoir, means safety checks further down the line, can be completed without dismantling/unsettling the rifle. Indeed, it can be taken to, or sent away to a test centre as a separate air vessel, which has to be more palatable to any enthusiast, than surrendering our favourite rig to a third party. Charge the action to 200-bar, and we are ready to roll!

Weihrauch’s simple, cast alloy, rotary magazine must be one of the most robust and reliable designs on the market to date. To fill the mag, first, pull the side lever back until the action is cocked, then retract the mag retaining clip rearwards and pull the magazine clear of the action from the right-hand side. Pellets are pushed head-first into each chamber in turn, then the full magazine is pushed back into its home within the breech block. Push the retaining clip forwards to lock it in place close the side lever. The first shot is now ready, and subsequent working of the super slick action rotates the mag and indexes the next shot in turn.

I’ve shot many models over the years from the 100 series, and I have to say that there is an air of real refinement about the firing cycle. The adjustable, 2-two stage trigger does feature a plastic blade, but performance is so slick and smooth, that I can’t find fault. There’s little movement to the action, that side lever is just perfectly weighted, requiring minimal effort, and with Weihrauch’s renowned silencer fitted as standard, muzzle report is incredibly muted. All those elements combine, for an HW100 shooting experience, that is quite unique.

Over the chronograph, I recorded 98-shots and only stopped when the needle on the gauge showed a residual pressure of 90-bar. Yes, the action is regulated, but total velocity spread over the charge of just 13fps, is superb, nonetheless. With those figures, we’re entitled to expect some half decent down range accuracy, and this came in on the money too. Genuine 35-yard, centre-tocentre clusters of just a quarter inch, is enough to encourage a grin, but it really is the subtlety of the delivery that impresses.

Synthetic stocks add a new dimension to this now modern classic of an air rifle and having developed a preference for silenced airguns, I can really appreciate the muted muzzle note of this model too, and it all adds to the experience of shooting one of the best hunting rifles currently available. A clever and well executed addition to the HW100 line-up for sure.