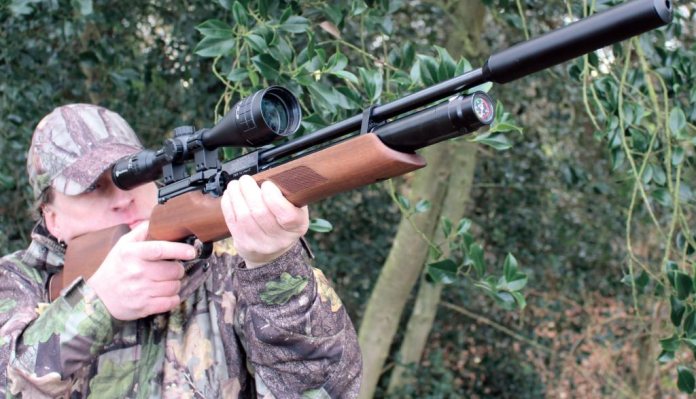 In 2003 the hot news on the airgun scene was the Teutonic titans of the spring powered air rifle had launched their first ever PCP. As the years have rolled by, we’ve seen/and now have quite a varied selection of options available of this rifle but one not often given the credit it deserves is the fulllength sporter – the HW100S. Often referred to as having a ‘Bavarian styling’ (alluding to the rifle’s furniture), and as this model has also quite recently been given a facelift, high time to check it over methinks.

On initial inspection you can’t fail to be impressed by the highly attractive grain configuration of the ambidextrous oiled walnut stock that boasts a quite substantial angular cheekpiece. The shape of which is made even more prominent due to it having a very distinctive straight edged profile complimented by a full brown rubber buttpad with white line spacer.

The slim neck behind the chunky fist filling pistol grip has deep contouring to the rear that intrudes into the cheekpiece on both sides allowing the shooting hand to attain a full and comfortable hold on the steep drop-down pistol grip. Cosmetically this is enhanced with a rosewood end cap plus white line spacer.

The quite lengthy forend is relatively chunky with a flattish underside which curves ever so slightly inwards as it runs forward to end in a rounded edged angle back tip. The grip aids applied are very frugal and include twin panels of well-cut yet very fine chequering along either side of the fore section while matching panels are found at the grip.

In respect of handling and feel the benefits of the design are manyfold. It’s not only practical but gives a very solid base for the action to sit in and be operated from. It’s also easy and comfortable to hold therefore aiding all aspects of gun control.

As per other ‘100’ options the air reservoir with large forward facing ‘manometer’ is detachable so it can be filled on or off the rifle, but for on gun charging a quick fill probe (supplied) ‘plugs’ into the fill point at the front of the reservoir. When not in use it’s protected by a large easy grip insert plug to keep out dirt and grime.

At risk of stating the obvious, the HW100 uses a side-lever to run its multi-shot magazine and undoubtedly this is the ‘lever’ that turned the UK airgun shooting public on to this type of cocking mechanism.

To remove the 14-shot wheel shape magazine, you first need to pull the side-lever outwards and fully back where it locks in the rearward position. Then slide back the serrated outer edge magazine retaining catch sited just behind the magazine itself, whereupon it can easily be lifted from its housing. Fill all the chambers with pellets and simply slot the magazine back into the action, push the retaining catch forward and close the lever. Hey, presto – the rifle is now cocked and loaded. A nice touch is Weihrauch now machine an indicator on the outer edge of the magazine seen as a very narrow and shallow milled ‘silver’ slot. So even on dull days you can clearly see the indicator (if you wish to use it when placing the mag into the action), because it shows when it comes around again – a visual reminder of your ammo status or as it’s positioned next to a chamber even when you’re on the last pellet stored. As I said a nice touch, but once any shot has been fired, pulling the side-lever fully rearward to cock the rifle also indexes the magazine around to the next station – returning it back to the closed position once again probes another pellet directly into the barrel.

Incidentally, a feature that’s a credit to the company is that the mechanism has been designed so you can’t ‘double load’, therefore no worries of putting two-up the spout, so to speak.

The manual, re-settable trigger safety lever operates very positively and is positioned on the top right-hand side of the action block. Push forward and you put the rifle into live fire mode indicated by a red dot clearly visible on the high lustre metalwork behind. Pulling it back puts the rifle on safe whereupon you can clearly see a white dot on the action. Incidentally, the safety can only be operated and indeed only functions when the rifle is primed.

For test, I fitted a Nikko Stirling Panamax 4.5 – 14 x 50AO scope, a quite substantial optic but one that suited the rifle and didn’t in the slightest affect the inherent handling and balance.

Soon setting a 30-yard zero, from experience I wasn’t surprised to see that the rifle produced ragged pellet size groups at this range shooting from a rested position. Push this out to 40-yards and slightly beyond and the HW100S proved it could easily give back sub ½-inch groups as long as weather conditions are conducive.

Another plus is the topquality self-regulating valve system ensures a high-level of shot to shot consistency. The firing cycle is best described as ‘dead’ and as expected the very effective time-tested and proven company’s own ‘HE’ (High Efficiency) silencer totally negates muzzle report. As for the barrel – Weihrauch certainly use quality tubes – it’s semifree- floating being guided up along the top of the air reservoir to be held secure at the front section by a chunky barrel band. This support has a synthetic O-ring that protects the barrel from knocks, adds extra strength but doesn’t affect the benefits a semifloating tube affords accuracy.

Obviously, the superb finish of the metalwork and operation of the side-lever action is without question and the HW100S can be described as being attractively styled and also having a very luxurious finish. It feels good in the hold and comes up to the shoulder very easily for such a wholesome gun. However, don’t presume this is an overly heavy rifle as it certainly isn’t, rather it has the feel of a solid, reliable and very dependable one.

Attention to detail is very impressive and if the more traditional styled full-size sporter air rifle ‘rings your bell’ then you’d be well advised to give this some very serious consideration.