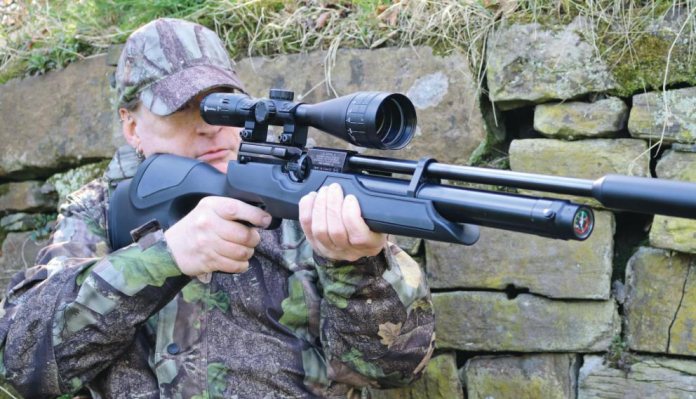 Until now, I thought I’d tested every version of the HW100, but it seems not, as you can special order the rifle as either a carbine ‘K’ or full-length ‘T’ Thumbhole in a black synthetic stock.

As I’m sure most are aware, the off-the-rack synthetic stock versions of this rifle are carbine only and are dressed in green polymer livery. Now, although to some extent this is hunter-friendly by way of colour, a lot of shooters prefer a synthetic stock to be the more usual black colour. So, to keep everyone happy, Weihrauch can supply black synthetic stocked HW100’s to special order. To be specific, if you require either a carbine or full-length thumbhole (on test) then the first port of call is your local gun shop, they will liaise with Hull Cartridge to get the gun imported.

On the dark side

The synthetic ambidextrous stock has a generously sized, mediumhigh cheekpiece. The now-familiar enlarged thumbhole sits behind a steep drop-down pistol grip with palm swell. It also boasts a very useful height-adjustable rubber butt pad, to allow you to tailor shoulder fit. In comparison, the relatively slim, slab-sided forend has a well-rounded underside and retains the same contour for much of its length, until ending in a ‘scoop’ forward rounded off tip.

The stock includes soft-touch inserts, which are of a semi-rigid, grey coloured rubberised compound and are integrated into the build at key areas for grip and comfort. The insert at the butt section fully straddles the cheek piece, wrapping right over the top and extending far enough on both sides to be useful for both right and left-handers. The grip aids are similarly sensibly configured and appear as single panels on both sides of the pistol grip, plus quite lengthy ones are set along either side of the forend. The latter is ideally placed for a natural leading handhold.

Finger channels run either side of the stock, from the upper part of the rear of the grip to the trigger guard. This means your trigger finger has an unhindered passage, allowing the pad of the forefinger to be almost directed onto the blade.

Also, the stock design has been slightly modified, specifically, this is seen where certain areas have a different contour from the wooden stock variants. These flat sections are most noticeable running just below the action and angular flat sections also taper upwards from the underside, just forward of the trigger guard. In fact, the flat slab-sided appearance of the forend can be seen to run all the way to the rear of the rifle, but due to the inclusion of those nifty inserts, the stock has quite a stylish appearance. Overall, a very ergonomic design.

The forend also has an upper recess to allow the substantial barrel band to be installed, and due to its design, the tube is still semi-free floating in nature. It’s a design not often highlighted but one that ensures a greater level of in-line strength and security for what in effect is quite a lengthy barrel.

Talking of length, the air reservoir looks quite long but in fact, is the standard size for the full-length model. The reason it does appear to be ‘stretched’ is that these models of HW100 have carbine size stocks. Now, if you are wondering if handling is affected, I can put fears to rest because in respect of this, the benefits of the carbine stock design are numerous. It’s not only practical but it doesn’t add extra weight, while still easily catering for your leading handhold. It also makes for a very solid base for the action to sit in and operate from, plus the rifle isn’t front heavy. All these attributes combine to make this a very comfortable handle to hold, therefore aiding all aspects of gun control.

As per other ‘100’ options, the air reservoir includes a large forwardfacing manometer (air gauge) and is detachable so can be filled on or off the rifle. For on gun charging, the supplied quick fill probe plugs into the fill point at the front of the tank. When not in use, the port is protected by a large easy-grip insert plug to keep out dirt and grime.

From a recommended 200bar fill, you can expect approximately 110 full power shots in .177 calibre and 140 in .22 (on test). At the risk of stating the obvious, the HW100 uses a side lever to run its multishot magazine. Undoubtedly, this is the lever that not only introduced this type of cocking mechanism to the general airgun community but helped it become widely accepted.

To remove the 14-shot mag, you first need to pull the side lever fully back where it locks in the rearward position. The mag can be removed once the retaining catch – located just behind it – is moved backwards. Fill all the chambers with pellets and simply slot the magazine back into the action, push the retaining catch forward and close the lever. The rifle is now cocked and loaded. A nice touch is Weihrauch now machine an indicator on the outer edge of the magazine, seen as a very narrow and shallow milled silver slot. Even on dull days, you can clearly see this mark.

Operation of the action is simple; once any shot has been fired, pull the side lever fully rearward to cock the rifle and index the magazine. Then close the lever and another pellet is once again probed directly into the barrel. Incidentally, a feature that’s a credit to the company, is the mechanism has been designed so you can’t ‘double load’, therefore no worries about putting two pellets up the spout.

When you consider Weihrauch brought us the now legendary Rekord trigger unit for spring-powered airguns, it’ll come as no surprise that the 100’s 2-stage, adjustable, match-grade mech is an equally impressive unit. The black anodised alloy blade is ergonomically curved and nicely proportioned, affording a very comfortable finger-feel.

The manual, re-settable trigger safety lever operates very positively and is positioned on the top right-hand side of the action. Push forward for FIRE and back for SAFE. Incidentally, the safety can only be operated and indeed only functions when the rifle is primed.

For the review, I used two different optics, a Nikko Stirling Panamax 6-18x50 AO IR and a Hawke Airmax 4-12x40 AO AMX. The reason being, I wanted to see if different sizes of scope affected the inherent handling and balance. I’m pleased to report they didn’t, therefore clearly indicating this is a very well-balanced air rifle.

With a 30 yard zero and from a rested position, I wasn’t surprised to see that the rifle produced ragged pellet size groups. At 40 yards it showed itself capab

Another plus is the top-quality self-regulating valve system, this ensures a high level of shot-to-shot consistency. The firing cycle is best described as ‘dead’ and as expected the company’s very effective, timetested and proven HE (High Efficiency) silencer totally negates muzzle report.

As for the barrel, Weihrauch certainly uses quality tubes. As previously mentioned, it’s semi free-floating and is guided along the top of the air reservoir where it is secured up front by a chunky barrel band. This support includes a synthetic O-ring that protects the barrel from knocks and adds extra strength but doesn’t affect the benefits that a semi-floating tube affords accuracy.

Overall, the HW100T Black Synthetic is, without doubt, a very desirable and stylish looking rifle for those looking for an all-weather hunter. The finish of the metalwork plus operation of the side lever and multi-shot mech is without question up there with the best. The airgun is almost effortless to hold, extremely accurate and comes up to the shoulder quick and easy.

So, if you like your synthetics on the dark side and the fuller length sporter-type air rifle suits your build and requirements, then I would highly recommend you place a special order at a retail outlet of your choice.

Thanks to T & J. J McAvoy LTD for supplying the rifle on test.