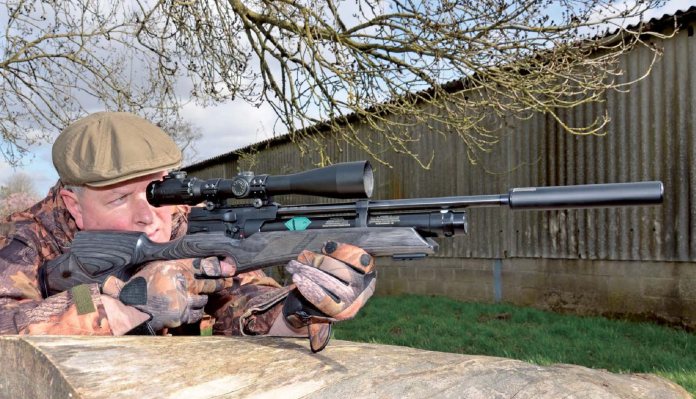 For such a traditional manufacturer as Weihrauch, synonymous with chemical bluing, finely machined steel components, and all the other time-honoured processes of the gunmaker’s art, their HW110 was a radical departure indeed. Constructing an entire breech block, trigger, guard, and even the exterior of the side-lever from ballistic polymer was surely a step too far for their army of fans around the globe? Well not so, it seems, and having played extensively with the carbine (K) version of the HW110 in Black Soft Touch livery a while back, I have to say, I can see why the revolution never quite came. Of course, the keyboard warriors on ‘soshal meeja’ would have their say, and the odd negative comment from those who hadn’t even seen the thing was inevitable. Yet Weihrauch weathered the mini-storm of protest, emerging the other side of the teacup with newfound respect from all quarters.

Pick up the HW110 in any guise and the sheer handling and function of the mechanics at its heart are guaranteed to win you over in a trice. And we’ll come back to that in a moment. First, it’s time to showcase the new version on test here, the HW110T Grey Laminate, and first impressions have to conclude that it’s a very slicklooking piece of machinery.

I first saw the gun at the British Shooting Show at the start of 2020, where UK official importers, Hull Cartridge, had it proudly displayed – all preavailability, and pulling in keen interest from all sides.

Laminate now dominates the shooting sports in one form or another, as shooters across all the disciplines wake up to the technical advantages to be had from a gunstock made in this way; and if you’ve never quite realised what all the fuss is about, then it’s really very simple. The stock blank is constructed from many layers of thin wood, bonded together with special adhesive at every stage. The shape is then cut from this artificially made block, and as the lines and features are cut out the pleasing byproduct is the way patterns and swirls are exposed along the way. Different coloured wood layers can be used, and then these are also exposed in the pattern as the final stock configuration emerges from the process. All aesthetically pleasing, but the real advantage has nothing to do with looks, and all to do with performance.

The wood is sealed and varnished, and the endresult is the most stable form of gunstock, resistant to moisture if properly sealed, and resistant to warping even in extreme temperatures. I’m a huge fan of Walnut, yet get it soaked and there is some chance that small sections may swell with the ingress of moisture. These tiny movements can be enough to move the gun’s action out of alignment in some way, and in the case of a precharged pneumatic airgun, for example, if the wood is tight against the main cylinder, this can be enough to cause alignment issues as the cylinder itself needs room for expansion. In short, a gunstock on the move can be a recipe for disaster, and laminate just helps allay any doubt in the set-up with its stability under pressure.

There is a downside to all this wizardry, and that is that laminate is more often than not heavier than a piece of conventional wood of the same dimensions, given its increased density.

Take a look at Weihrauch’s creation here, however, and the sleek sporter configuration has been relieved and trimmed of excess wood where it isn’t needed, such as under the butt section and inside the thumb hole. After this exercise, the difference in weight is fairly academic. Indeed, unscoped, this HW110T Grey Laminate tips the scales at a mere 7.4lbs, so nothing to fret over.

I love the panels of stippling applied to the forend and around the pistol grip, favouring it to chequering in terms of practicality. The cheekpiece is nice and prominent too, and feels supportive in the aim, but the fact that the rubber buttpad is adjustable at the rear, really enhances eye scope alignment. That ultra-raked pistol grip is classic Weihrauch, and very comfortable, but some form of thumb shelf would have been nice.

Looking to the forend, the angled tip looks the part, and that accessory rail underneath adds versatility for those who fancy adding accessories, such as a laser or bipod. But if this were my personal rifle I would unscrew it, simply for greater comfort in the aim. Execution and final finish of the woodwork is pretty well faultless.

Time to get started. Fitting a scope to the HW110 is fairly straight forward, although mounting is via a continuous picatinny specified rail, so appropriate mounts need to be sourced. Next, we need to charge the cylinder, and this is done in situ, although Weihrauch design these models with removable air cylinders, which is a great idea allowing for safety testing further down the line. The company recommend an unofficial regime of every 10 years, which sounds about right to me and perhaps an example other manufacturers may wish to follow.

Charging the main cylinder is done via the probe-style adaptor supplied, and this is inserted into the inlet valve at the front of the cylinder. The same system is employed with the HW100 series, and it’s quick and efficient. Pull out the small nylon plug in the inlet valve (missing on my test demonstration model, I hasten to add), then fully insert the airline and gently open up to the tune of 200- bar. Bleed the line, remove the probe, and replace the plug to keep out the dirt.

Now we need to fill the 10-shot magazine, and the robustness of the casting keeps this part simple. Insert a pellet into each chamber in turn, keeping them nice and flush, then pull the side-lever all the way back, cocking the action. At this point, push the magazine into its slot within the action, from the right-hand side, whilst pulling up the magazine retaining lever. This operation can be a bit fiddly, occasionally needing a nudge of the mag to the side before the lever can be closed. However, with the magazine successfully located, the fun can really start.

It’s plastic, Jim, but not as we know it! As mentioned, extensive use of ballistic polymer may have raised a few eyebrows when the HW110 was first launched, by virtue of it being a Weihrauch, yet with significant sections of the firearms industry now adopting this material, it’s clearly a medium of the future that looks set to gain ground. Indeed, if you still happen to harbour any resistance to this brave new world, a quick session shooting one of these rifles will soon eradicate any negative thoughts, for the breech arrangement of the HW110 is, frankly, an exercise in subtlety. Okay, admittedly I still find that magazine retaining lever a little fiddly and would prefer a simple two-way catch as per the 100 Series, but with everything in place, functionality is sublime.

Cocking the side-lever is simplicity itself, with very little effort required, and this cycles the magazine as it reaches its most rearwards position. Close the lever, and the next shot is ready. Weihrauch’s two-stage trigger is another subtle affair, and whilst a plastic/polymer blade sounds offensive on an upmarket airgun, the warm feel, comfortable width, and ultra-smooth release combine to great effect. Factor in that supremely efficient silencer up front, heavily muting the proceedings, and the endresult is just an extremely pleasant firing cycle.

Handling with the new woodwork feels very instinctive, and with the slimmed down grip configuration, extensive stippling, and that adjustable pad to be manoeuvred to suit, this HW110 gets a big thumbs up in the practicality stakes.

From the prescribed 200- bar fill pressure, I recorded 110 shots from my .22 action, using Weihrauch FT Exact Jumbo pellets supplied. However, an honest assessment of performance on test has to report that a total spread of 30fps was recorded, but it has to be said that a rather more representative picture was distorted by just one shot at a lower velocity, using pellets I hasten to add, straight from the tin. Just one shot dipped to 551fps, otherwise the lowest figure would have been 564fps. Factor that into the stats and the total spread shows as a far more impressive 17fps!

As for accuracy, I first tried Weihrauch F&T Special ammo, and these managed half-inch groups over 30-yards – hardly a disgrace, but not quite at the level that I felt this model could muster. There is often a case for trying different ammo, as one example of an airgun can prove pellet-fussy and, for whatever reason, favour a different pellet. This HW110 showed just such a predilection, and switching to the Weihrauch FT Exact Jumbos, the groups noticeably shrank! Ragged tight enlarged holes at 30-yards and groups coverable by a 5p piece at 40-yards, were all the proof I needed. You expect performance from this manufacturer, but it’s still satisfying to see it when it arrives on paper.

Another winner then from this famous brand and a tasty choice for fans who appreciate not only the look of laminate, but also the technical edge, albeit slight, that lies beneath that rich veneer. Great feel and handling, along with the mechanical slickness of the HW110 action, results in an airgun with poise and pedigree, built to deliver when it matters.