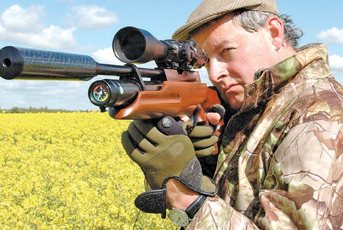 Weihrauch’s first ever pre-charged pneumatic, the HW100, was very well received when it hit the market some years back, yet the overall design has changed little since its introduction. Knowing your market always makes sense, and Weihrauch are well aware that their loyal fan base expect superior construction and finish, with solid engineering right up there at the top of the list. Let’s face it, this most traditional of companies doesn’t do ‘gimmicks’, preferring to play to their strengths by offering slickly machined, high grade airguns; and the HW100 perfectly reflects this outlook.

OK, the early versions of this very popular sporting rifle were rather thirsty on air, yet the fundamentals were in place from the off, and the marque has subsequently gone from strength to strength as a result.

However, one main feature of the original blue print, which has remained throughout the production run thus far, has been the rotary magazine fed, multi shot action. For those that way inclined, Weihrauch’s rotary mag system happens to be one of the most reliable and advanced designs on the market, with precision engineering, and a simple robustness earning it an army of fans. For those more drawn to single shot operation however, the company’s rather one track approach has left many prospective owners out in the cold and forced to look elsewhere.

Well I’m pleased to say that this has finally changed, with the introduction of the new HW101- a dedicated single shot version.

Before placing the new spec under scrutiny, let’s just familiarize ourselves with the standard features that the HW101 has to offer the enthusiast. What we have here is a full powered sporting pre-charged pneumatic airgun, with on-board compressed air cylinder, side lever cocking, semi match grade trigger unit, and thumbhole stock.

Take a quick glance at this new kid on the block, and you could be forgiven for failing to notice much difference from previous models; yet closer inspection reveals brand new sections of breech block. Basically, a loading channel sits where the magazine and its receiver would normally be, and with the lead-in to the breech relieved, a pellet can be easily rolled into the channel, ready to be seated by the bolt probe. It’s all slickly done as you’d expect from this manufacturer, and the standard of finish, as previously touched upon, is one of the features that really make these premium rifles stand out from many of their rivals.

Weihrauch are hardly synonymous with cutting corners, yet with turbulent economic markets and Euro exchange rates rarely working in their favour, the HW100 series has often looked pricey when compared to some competitors. By making some changes, this new single shot package enables a significant saving to be made when compared to those multi-shot models, with the result that the HW101 is price pitched dramatically lower than it’s stable mates. This is all importantly achieved with no loss of quality too, which is no mean feat.

So how’s it done I hear you ask? Firstly, the single shot model is offered primarily in KT spec- i.e. a carbine with a standard thumbhole stock fashioned from beech as opposed to more upmarket walnut. Secondly, the vastly simplified design of the new breech block dispenses with the need for the intricate magazine retention spindle and all the associated engineering normally required. Simplified design usually equates to lower manufacturing costs, with the result in this case, that the final RRP can be positively slashed! Just look at the figures -  multi shot versions cost approximately £847 at the time of going to press, and this single shot model comes in at around £637. That’s a huge saving in anyone’s book – around 25% lower by my calculation - and in these uncertain economic times, some shooters will find the new HW101 irresistible for financial reasons alone.

That said, multi-shot rifles just aren’t for everyone. Indeed, I would personally always opt for a single shot action, since, with one eye on competition shooting, the ultra precision and straight line design of any single shot, should in theory at least, out perform that of a comparable magazine fed specification. Whether competition shooter or hunter mind you, the end result is the same - we all want absolute accuracy and to hit the target where we intended.

A magazine system invariably asks the pellet to be moved from the magazine chamber into the breech or barrel, which can in a few cases, distort or even shave the pellet, with the result that down range accuracy can be compromised. That said, modern manufacturing techniques (with in many cases ultra fine tolerances) largely eliminates these problems. Yet for peace of mind, and maximum raw accuracy potential (as stated ‘in theory at least’), straightforward yet soundly engineered single shot designs are preferable.

Aside from the single shot operation for a moment, the familiar features of Weihrauch’s tried and tested PCP format are still here. Revisiting the stock, that thumbhole woodwork is a classic piece of teutonic styling, synonymous with this manufacturer. Yes, beech costs significantly less than more glamorous timber, which helps the marketing strategy here; yet Weihrauch always seem to find nicely grained woodwork regardless, and the test rifle’s stock is both attractively figured, and beautifully finished. That steeply raked pistol grip, complete with stippling, finger grooves, and generous cut-out, all combine to create visuals which are very much a matter of personal taste. Add in though, the nicely accentuated cheek piece, offering perfect eye/scope alignment, and that angular stylish fore-end, and I for one reckon it works, both on an eye pleasing and ergonomic level.

Action wise, the standard configuration of barrel over cylinder remains, with the barrel running through an ‘o’ ring within a figure 8 style clamp. As with many rifles of this type, some shooters (mostly competition minded) will remove the clamp altogether to allow the barrel to fully float, (allowing for cylinder expansion) yet with soft ‘o’ rings utilized, and a short rigid barrel, the factory set-up should be fine.

The fact that the main cylinder is removable on all these Weihrauch PCP’s is another nice feature, allowing for periodic safety checks to be conducted by just submitting the cylinder for test. Not such an easy procedure with a fixed cylinder, so Weihrauch are one step ah

Charging the HW101 is the same as before, and a simple affair it is too. Just pull out the nylon plug from the valve at the front of the cylinder, push home the probe from the air supply, and decant to the tune of 200bar. Probe designs are by far the quickest route to a refill, but just be careful to check the probe is pushed fully home at the start and early on in the charging cycle.

Mounting a scope to this rifle is simple too, and again, some forward thinking and clever design sees a grid reference etched on top of the breech block. This allows for an accurate visual guide to precisely locate where scope mounts need to be returned to, when a scope is temporarily removed for example.

Given the short carbine action, Weihrauch supply these rifles with a threaded section at the muzzle, ready to receive a screw-on silencer (not included in the asking price I might add). With a carbon fibre Daystate Airstream silencer spun into place, I was ready for the testing to begin.

Once scoped up, my first port of call was the chrono check, but to be honest, I’ve shot enough of these rifles for the results to be largely expected and academic. For the record, from the 200bar fill, and using Air Arms Diabolo Field pellets straight from the tin, I recorded 60 shots, all within 13fps.

Gently pull back that exquisitely weighted side lever to cock the trigger and hammer, roll a pellet into the loading channel, and return the lever, allowing the bolt probe to chamber the pellet. It’s a subtle experience, and testament to the sound engineering on offer here.

Accuracy wise, over the 35yd test range, some impressive clusters formed as expected, yet for me, the weight distribution and balance of this carbine model, proved just a little light at the muzzle. The Daystate Airstream silencer that I happened to have handy, added little weight, and if this HW101were my personal tool, I’d invest in a heavier moderator to tip the balance towards the muzzle. Groups still easily formed around 0.3 of an inch from a rest, and when I relaxed more and shot the HW101 from the over arm FT stance, the inherent accuracy became even more apparent.

If you’ve never handled an HW100 series from Weihrauch, you may not appreciate just how nicely these rifles are put together. The single shot model now gives this classy German manufacturer a further option that should appeal to an even wider audience. Having spoken to Hull Cartridge, the official UK importers, initial consignments of the HW101 have been flying off the shelves ever since they arrived on our shores.

As for my endorsement, I can’t fail to recommend the new model for its design and execution. If you are after a quality full powered single shot sporting rifle, fit for either hunting or HFT duties if required, the HW101 should be near the top of any shortlist.