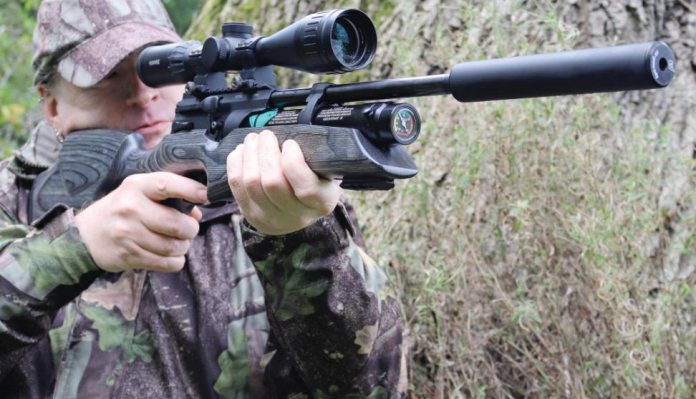 At the risk of stating the obvious, there’s now definitely no disputing the quality and performance of a Weihrauch manufactured PCP. I refer to all incarnations of the hugely popular HW100 and now the lower 10-shot magazine capacity HW110. It should come as no surprise that the HW110 has gained many followers, this I’m sure will be further boosted as the company now offer this model with a grey laminate stock. It is available in both standard length and ‘K’ carbine formats. On test is the HW110 KTL (carbine/thumbhole/ laminate) version and to say it’s mightily impressive is an understatement.

As I’m sure many are aware the original HW110 has a sporter design, ‘soft touch’ black rubber overmoulded handle. All is good for those who prefer all-weather practicality but some see it as a tad bland. That said it’s still fully up to the job it’s designed to do. Now the laminate woodwork of the ‘KTL’ model uses a colour blend of black and varying hues of grey. Cosmetically a very eye-catching and camo effective colour but it’s not only in the looks department that it scores very highly.

The company has wisely decided on keeping the elongated thumbhole design which perfectly complements the steep drop-down pistol grip, welldefined cheekpiece and height-adjustable rubber butt pad. The rifle shows it’s true ambidextrous nature as there are recessed channels running from the thumbhole to the trigger. These are crafted into either side and neatly guide your trigger finger to the blade while your thumb is allowed to rest snugly into the contour on the opposite side.

Combined with the grip’s palm swell this makes an ideal platform for full blade contact and trigger control.

The relatively short forend is quite thickset with a flattish underside and it displays a slight inwards and upwards curve which ends with a stark angled back tip. There is a section of Picatinny rail located in the 6 o’clock position, just behind the tip which comes supplied ‘off the rifle’. It is recommended that this is fitted by a reputable gunsmith. Most users will get this installed as it’s ideal for fitting a bipod/ sling attachment point. A nice trait is when in situ, due to the balance of the rifle, your leading handhold is drawn naturally behind it, so you don’t even feel it’s there.

A notable inclusion on the grip and especially the forend is the generous twin panels of attractive, knobbly stippling that act as superb grip aids. Another stylish touch is the first letter of the manufacturer’s logo is crafted into the lower rear section on either side of the butt.

Overall, the shape is bold, stylish, and practical yet very ergonomic and perfectly suits the action it holds. This results in the rifle being extremely easy to handle and when the butt pad is adjusted to suit scope height, the stock almost blends into your hold.

The large colour enhanced manometer is easy to read and sits at the very front of the air reservoir. Just behind the bevelled face is the fill point which when not in use is protected by a friction fit plug. On the subject of protection, the tip of the forend serves to give clear visual sight of the air gauge without having to look directly down the barrel, plus it gives a high level of protection from any potential forward knocks and scrapes.

Using the supplied fill probe, and with a recommended charge of 200bar, this little carbine returns (as stated by Weihrauch) 55 shots in .177 and approximately 70 in .22 calibre. I found the .22 cal test gun gave 60 full power shots using RWS Superfields. Incidentally, the standardlength rifle is stated at returning approximately double the number of shots in relation to the comparable calibre counts stated.

The HW110 is very modern, not only due to its overall styling but more so because the action, lever, Picatinny scope rail and the barrel band are all manufactured from a hi-tech ballistic polymer. Although this is new to the airgun scene, it’s a material that’s widely used in the manufacture of firearms. It’s strong and more than capable of coping with the knocks, scrapes, and the operational stresses an air rifle can be subjected to in the field.

The side-lever is similar in design to the 100’s but this time runs a large 10-shot wheel-shaped removable magazine. That might be 4-down from the HW100 but I’m sure many will agree that 10 is enough. The mag itself doesn’t protrude above the action but sits snugly in a very precisely machined housing. This leaves an uninterrupted length of rail for scope fitting.

The ergonomic side-lever pulls back effortlessly on demand, however, to remove the magazine takes a bit of a knack. For this you need to lift the front of the retaining lever/catch upwards, this, in turn, retracts the stainless steel retaining spigot from the centre boss of the magazine. Note that as it’s under spring tension, you need to manually keep it in this position, or it will return thus preventing the mag from being removed. I find the optimum way to operate the system is to use the back front section of the thumb of my right hand to hold it up, then use the thumb of my left hand to push the magazine out of its housing from the left until it protrudes far enough out of the action to be gripped by the thumb and forefinger of my right whereupon it can be fully removed from its housing.

After filling all 10-chambers of the alloy magazine, you need to again lift the retaining catch, slip the magazine back into the action, then release it to its original position. Finally, returning the side-lever probes a pellet out of the magazine and directly into the quality tube. At this point it’s wise to engage the safety catch by pushing one of the levers to the forward position, then when ready to take a shot, pulling either to the rearward position puts the rifle into live fire mode. At this point, a red dot can be clearly seen on the action to visually indicate status.

I scoped up with a Hawke 4-12x40 AMX Airmax in a set of suitable two-piece Sportsmatch mounts. An optic such as this or a more compact one is more than enough on a rifle of this size and will suit most hunting requirements. After setting a 30-yard zero, the rifle made short work of producing ragged pellet size clusters on the target.

The 2-stage adjustable match-grade trigger is a very precise unit that breaks crisp and clean. The blade is very finger-friendly, being nicely curved and contoured with quite a wide forward face. Accuracy is aided by the sheer predictability of the unit plus the rifle’s self-regulating valve system ensures a high level of shotto- shot consistency. The firing cycle is best described as ‘dead’ and as expected the highly effective HE sound moderator reduces muzzle report to the bare minimum. Weihrauch fans will note the moddy has undergone a slight design change, at least outwardly that is, as it now has a flat and not tapered rear section plus the front bears white lettering – here we see the company’s ‘W’ logo again but also wording that clearly states it’s an airgun only moderator.

Before leaving the sound moderator, and due to the fact Weihrauch have quite a few different carbine and bullpup PCP’s it’d be nice to see the company produce a shorter HE silencer to suit the more compact rifles on their roster. I’m sure with their level of expertise this would be a task they’d undertake quite successfully. However, maybe I’m nitpicking as the HW110 KTL is a top-performing, well designed, highly accurate and lightweight multishot PCP that any hunter would be blessed to have at his or her disposal.